If ever there was a record for sporting the maximum number of looks in one's career, Bollywood actor Aamir Khan would top the list. From boy-next-doors and devil-in-disguise to fancy caricatures and unrecognisable drag queens, he's done it all.

Over the years, his creative enthusiasm for zany and wacky has gotten bigger and better, just like his choice of films, making him a pleasure to look forward to.

The powerhouse entertainer turns 47 today. And what better way to wish him than showcase his 47 different faces through a career spanning more than four decades.

1. It all began in uncle and filmmaker Nasir Hussain's musical Yaadon Ki Baarat where he played a young Taariq clinging to his momma all through its super hit title song.

2. He also featured in a flashback of the forgettable Madhosh, again a home production, as a younger Mahinder Sandhu (yep, the star of Agent Vinod) took centrestage. 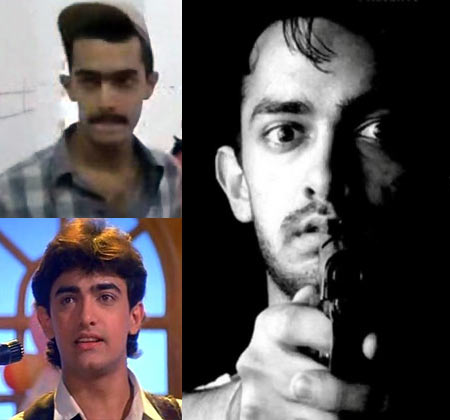 3. A puny Aamir demonstrated early signs for getting into character (cap, moustache) in Ketan Mehta's Holi.

4. But it's his chocolate face debut as Raj in Mansoor Khan's take on Romeo & Juliet -- Qayamat Se Qayamat Tak -- that kick-started his journey into stardom.

5. Proving he's not just another pretty face, Aamir focused on the dark side in his National Award winning turn for Aditya Bhattacharya's Raakh. 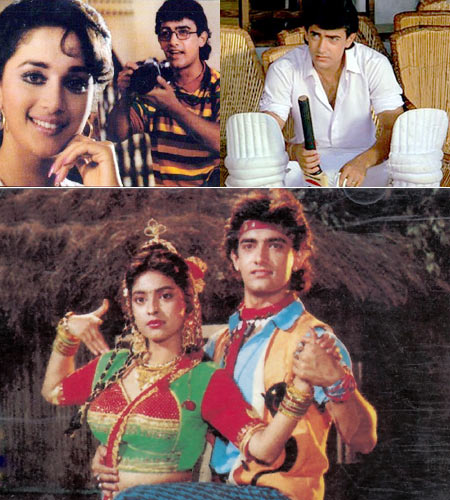 6. Aamir channels the Dilton Doiley within with his bespectacled avatar in Deewana Mujhsa Nahin.

7. There's nothing charming about his outlandish outfits as a filmi 'sapera' in the abysmal Tum Mere Ho.

8. The only time Aamir didn't read a script was to play an upcoming cricketer in Dev Anand's Awwal Number. 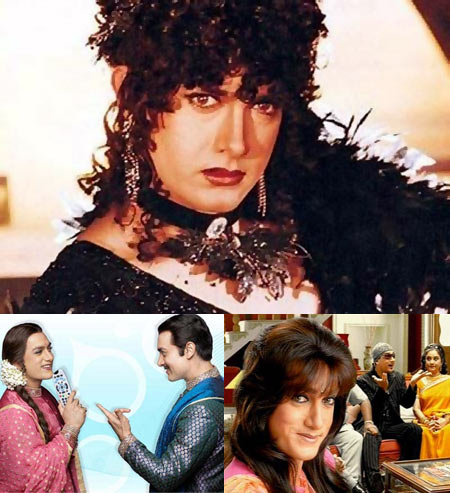 9. For Ashutosh Gowariker's Baazi, the star waxed his hair to sashay like a glamorous dancer in Anu Malik's Come September rip-off, Dole dole.

10. The drag queen act makes a comeback as Manno Bhabhi for one of his many Coca Cola commercials.

11. And continues to find success when he slips into yet another pair of salwar kameez to sell Tata Sky cable. 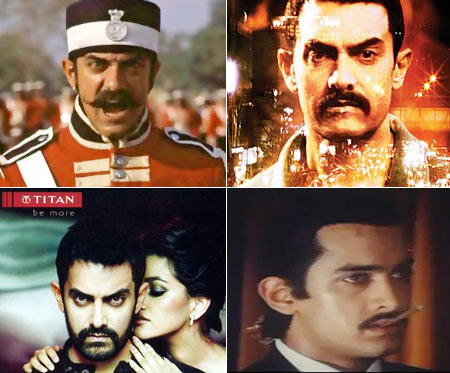 13. But before he played a historical figure, Aamir tried to pass off as a dangerous don in Aatank Hi Aatank. Since no one would buy it, he sported a sinister moustache. Not that it helped.

14. The moustache is back with a bang in his upcoming Talaash where he plays a cop.

15. And for this Titan advertisement, he's added a beard too. 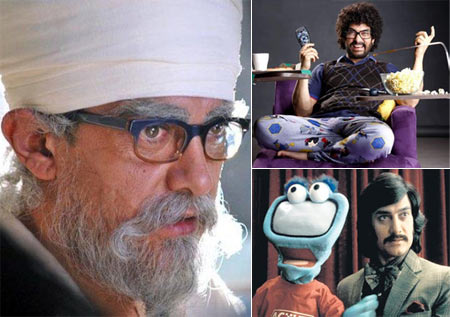 16, 17, 18. The famously perfectionist star approaches his role of a brand ambassador with the same seriousness as his roles.

Whether he's enacting an elderly sardar, a ventriloquist or a curly-haired geek, AK elevates 30 seconds space fillers into entertainment-packed capsules. 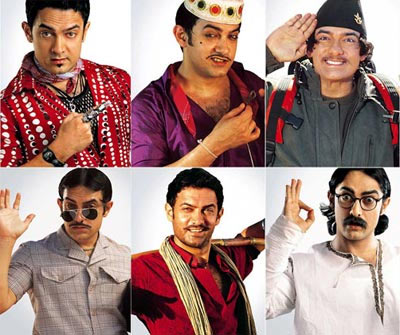 Clever get-ups, witty lines and a whole lot of fizz make his perky take on cultural stereotypes, from brash Jats to whimsical Babumoshais, a great deal of fun. 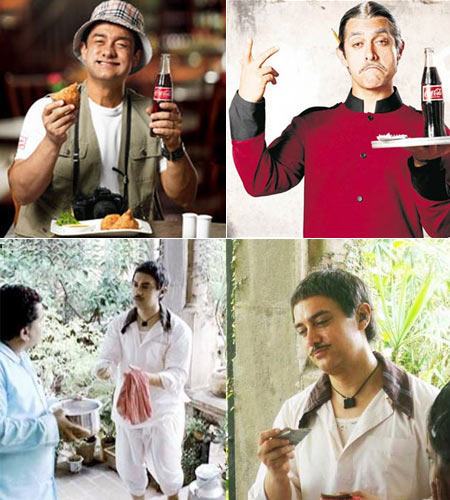 As evident in yet another spate of commercials starring Aamir as a squinty-eyed tourist, senior waiter or a smooth-talking doodhwala respectively. 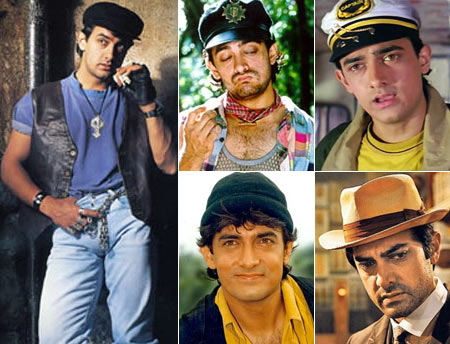 28. Love me, love my cap/hat. Be it the constant black fixture that crowns its loveable tapori in Rangeela.

29. Or an upfront press types in Dil Hai Ki Manta Nahi, hugely possessive of his 'captain' cap, which became quite a rage at that time.

30. A knitted beanie in Raja Hindustani.

31. A cool cap to go with all his oxidized accessories in Ghulam.

32. Or a classic Devdas-inspired hat in a cameo for Luck By Chance.

On the ethnic side 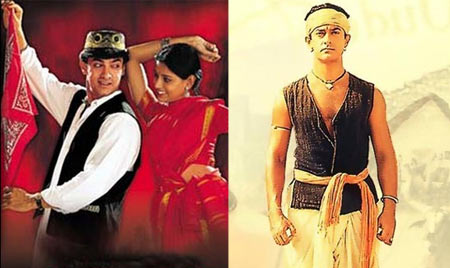 34. The man travelled back in time to play a dhoti-clad villager, striving to beat the British at a game of cricket, in his Oscar-nominated production, Lagaan. 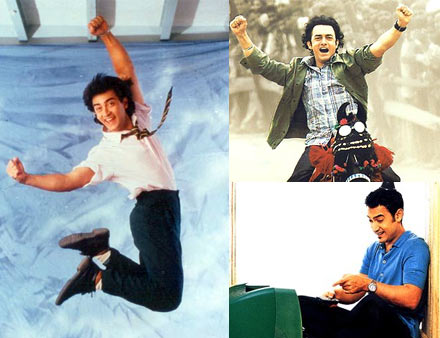 35. Jo Jeeta Wohi Sikander. A 20-something Aamir Khan romped about in uniform, rather believably at that, to convey the triumph of spirit.

36. Dil Chahta Hai: A 30-something Aamir Khan starts out as a college student, coming of age, in Farhan Akhtar's directorial debut.

37. Rang De Basanti: A 40-something Aamir Khan played an overgrown college-goer unwilling to pass out because he doesn't want to lose his clout outside campus. 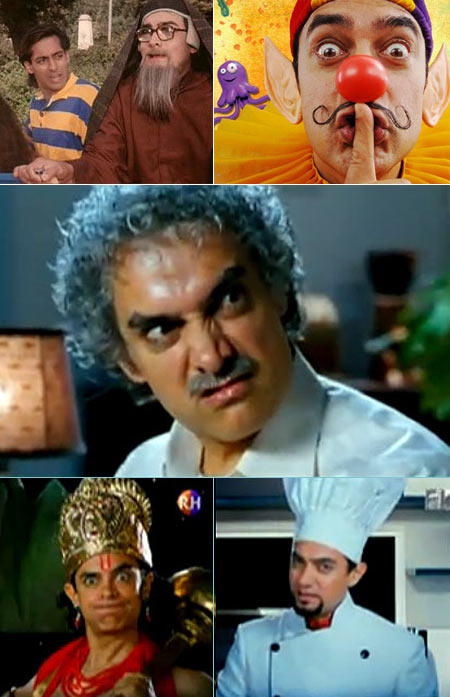 38. Often masquerading as someone else to catch the heroine's attention, Aamir slips into the garb of a wobbly old tangewala in Andaz Apna Apna.

39. A funny clown to break the ice with his students on his first day in school as art teacher in Taare Zameen Par.

40. 41. 42. And back to capturing the ladylove's imagination with a myriad of appearances, ranging from mythological heroes to college principal in 3 Idiots.

Variety is the spice of Aamir 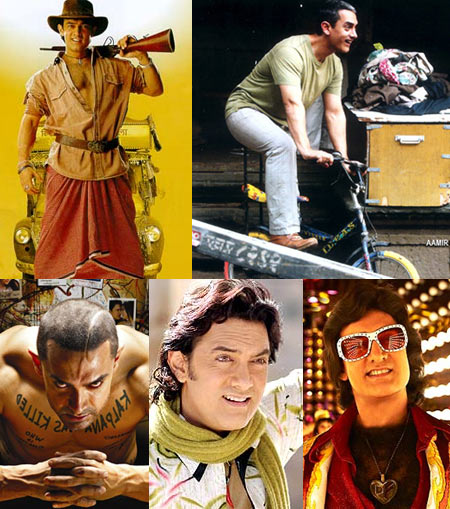 45. The superstar develops a startling eight-pack and opts for a sleek buzz cut with multiple temporary tattoos to star in and as Ghajini.

47. Aamir Khan goes all out to pay tribute to 1980s disco era for a retro item song in Delhi Belly.