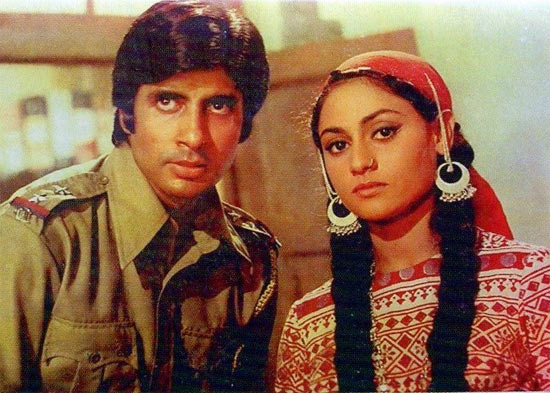 Forty years ago, he was just a lanky young man waiting to hit big. 40 years later, he's a superstar, legend and icon.

On May 11, 1973, Amitabh Bachchan's fortunes changed for good with the breakthrough success of Prakash Mehra's Zanjeer.

Written by the proficient duo Salim-Javed, the revenge saga about a tormented cop fighting his childhood demons not only turned Bachchan into a household name but effectively triggered the 'angry young man' phenomenon, whose glorious imagery has only become more grandiose with time.

We celebrate this Bachchan milestone co-starring Jaya Bachchan (then Bhaduri), Pran, Bindu and Ajit with a compilation of its 10 memorable scenes.

1. The complete emotionality of Bachchan's Vijay and his brooding temperament and recurring nightmares is based on the trauma this scene unfolds.

There's a sense of danger looming as the camera alternates between a husband and wife casually chatting about admitting their young son (playing a game of hide-and-seek with his oblivious parents) to a good school and slowly approaching steps of an unseen figure, even as Diwali crackers fill up the background in all its deafening element.

The sound of crackers and bullets merge as the figure emerges in the form of Ajit, wearing a conspicuous bracelet linking a horse charm, and mechanically shoots the boy-in-hiding's entire family in one single moment. 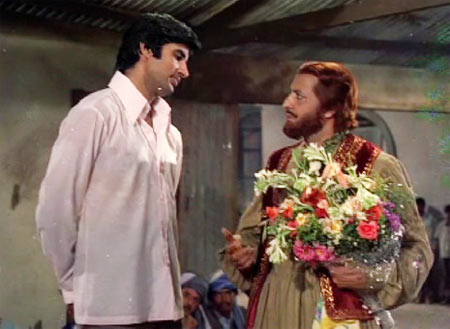 Pran's delightful turn as the passionate and loyal Pathan, Sher Khan continues to be one of the USPs of Zanjeer.

Ditto for his interactions with Big B.

They become the best of friends during the course of the movie but the beginning is rather unpleasant.

Vijay (Bachchan) shows no love to criminals and when Sher Khan enters the police station in his trademark swagger, probably accustomed to easily intimidated cops, fireworks are inevitable. 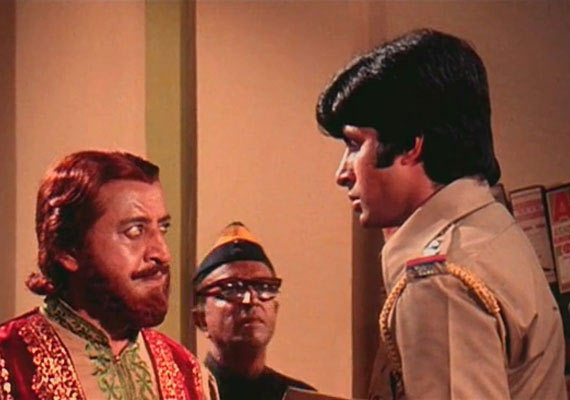 The scene to follow just after is just as potent.

An off-duty Vijay challenges Sher Khan into a duel -- 'Ab na vardi hai, na kursi hai' and the duo bash each other for a long time till they both are exhausted and collapse on the ground.

Realising the futility of fighting an equally strong opponent, Sher Khan concedes, 'Aaj zindagi mein pehli baar Sher Khan ki sher se takkar hui hai,' and they decide to shake hands on good terms but not before Vijay convinces him to shut down his illegal businesses and turn into a new leaf. 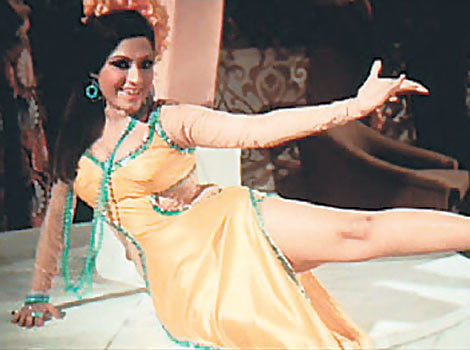 A saucy Bindu keeps it subtle as Ajit's glamorous girlfriend.

Her sassy demeanour comes forth when she hits on Zanjeer's virtuous hero, mischievously offering him something 'thanda,' 'garam' or 'extra garam.'

And when he opts for a glass of regular water, she (not so) innocently asks him 'Neat ya whisky mein?' 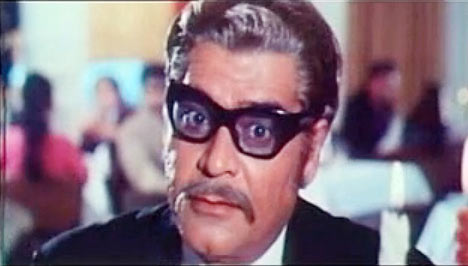 In a candid moment with Mona, he acknowledges his old boss Patil (Sapru) as the man who taught him everything.

Having never heard Teja praise anyone before this, Mona, out of sheer awe, wishes how she would have loved to meet her man's mentor.

But, here comes the masterstroke, when she asks him how Patil died, Teja stumps her with his chilling admission, 'Maine hi unhe qatl kar diya.' 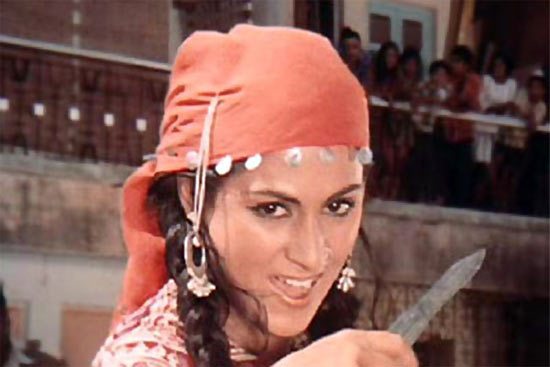 But the duo -- his outage, her guilt, generate lasting intensity.

Lured by a hefty bribe sum, Jaya Bhaduri's plucky Mala, a knife-sharpening vendor by profession, refuses to identify the truck driver responsible for the death of five school kids.

A furious Vijay then shames her by flashing the young dead bodies in their gory state resulting in a repentant Mala's change of heart. 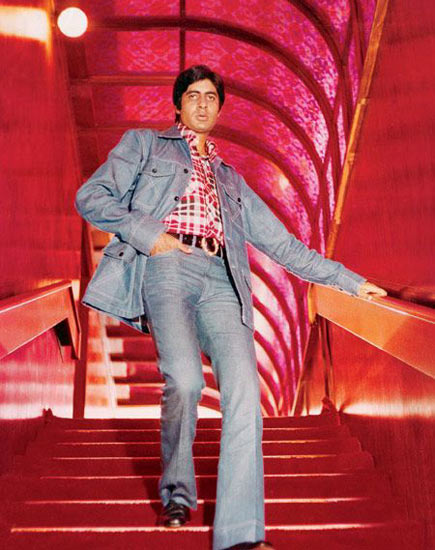 For the interrogation scene between Vijay and the one-eyed truck driver Goga (Goga Kapoor), he creates a pinhole camera effect to accentuate the strained mood even as he threatens in a hardboiled tone, 'Ek hazaar saal tak tumse poochta rahoonga aur tumhe batana hoga.'

The upshot is both stylish and emphatic. 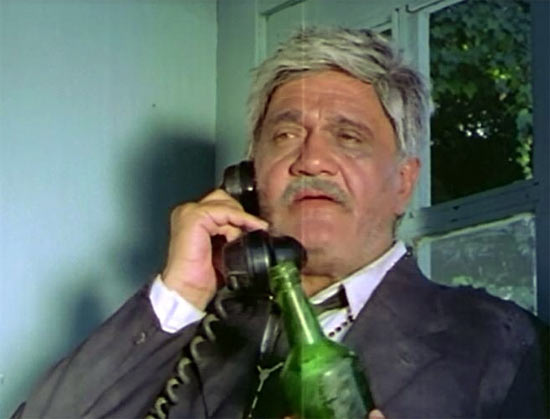 Om Prakash has an interesting role in Zanjeer.

Throughout the narrative builds him into a slightly batty, mysterious, seemingly helpful character who may or may not develop into the story's big, bad twist.

But the graveyard scene between Vijay and informer De Silva (Om Prakash) reveals his poignant back story.

He's a victim of Teja's illicit trades -- poisoned alcohol, which leads to the demise of all his three sons and that's the reason why he provided information to Vijay all this time.

The turnaround lends Zanjeer a sentimental touch at the right juncture in the story and creates a crucial conflict between Vijay's need to bust evil and promise to (stay passive) Mala. 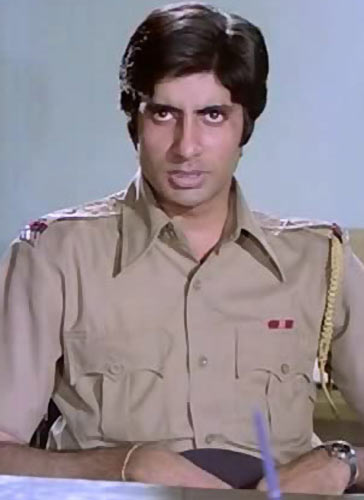 As soon as Bachchan's all-powerful baritone makes this announcement to Teja, dining with Mona, in a restaurant, Zanjeer makes its intentions to stop beating around the bush very clear.

Vijay is back in business! 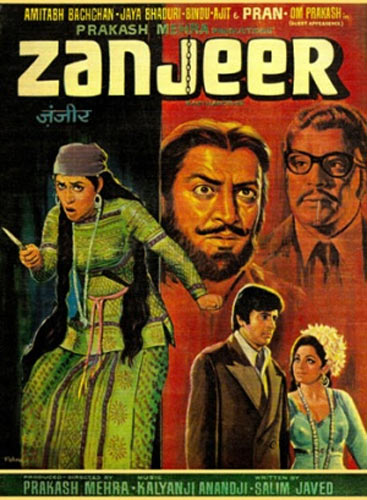 Of course, with the climax, Zanjeer comes to a full circle.

He reminds Teja of the murders to which the latter indifferently shrugs, 'Maine apni zindagi mein kai khoon kiye hain.'

One's need for vengeance and the other's utter absence of remorse provides a striking finale involving gunshots, floating body in a swimming pool and fireworks in the air.