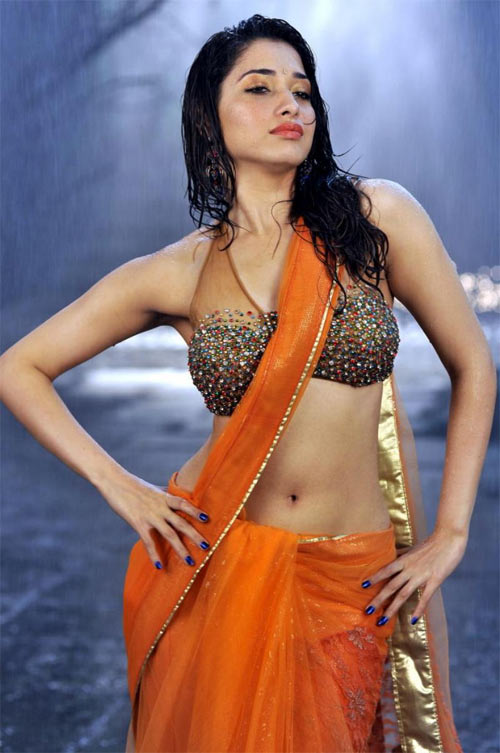 Years after Sridevi wowed us with her colourful avatar in 1983's Himmatwala, south actress Tamannah will take over in the film's remake, releasing this Friday.

Not many know that Tamannah had made a quiet start in Bollywood with a small budget film in 2005 called Chand Sa Roshan Chehra. It sank without a trace.

When I reach her newly-purchased home in Versova, a western suburb of Mumbai, Tamannah is busy dressing up for the rehearsals of the grand finale of dance reality TV show Nach Baliye, held over the weekend.

As she applies her make-up and sips on orange juice, we settle down to chat about Himmatwala, her transition from southern superstar to a Bollywood newcomer, and why comparisons to Sridevi are unfair.

Even before the script was in place, the comparisons between the old and the new Himmatwala had started. What are the challenges involved in living up to the audience's expectation?

Once I was offered the film, I saw the original Himmatwala to understand what Sajid (Khan, director) really liked from it. I wanted to get the essence of the film.

Thereafter, right from the first day of the shoot, I was only following Sajid's guidance.

Although I have been acting down south for eight years and have done 24 films, I came here like a clean slate, like a debutante.

I did not want to carry any baggage nor did I want anyone to have any preconceived notions about me.

'Commercial films are not about logic' 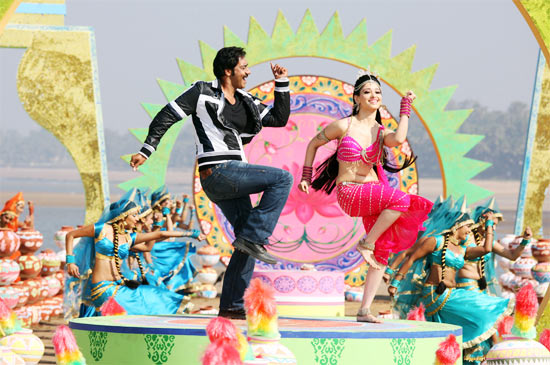 In the past eight years, you must have got offers for Hindi films. Why did you choose Himmatwala?

The criteria for doing a Hindi film was something that I would like to watch personally. For me, movies are stressbusters. I go for a movie which makes me feel good.

I find Sajid's work very entertaining. He makes movies for the audience. Ajay Devgn (leading man in the film) has been consistent with his films and the audience loves him.

At the end of it, films are team work. A good film will be churned out when people on board are good and work together.

How do you look at the transition from being a superstar down south to being a newcomer and creating a space?

I don't think too much about the future or past. I forget that I am a superstar down south. I am an actor and I enjoy doing my job.

When I met Sajid for the first time, his conviction was what really made me take a call instantaneously. Himmatwala is a commercial film and I think commercial films are not about logic.

It's all about the magic which is the belief and the conviction that a person has. At the same time, he knows cinema. The film is said to be a remake but Sajid has given it a completely new twist and re-written the story. Apart from a few similarities, the film is completely different.

'There is only one Sridevi in Bollywood' 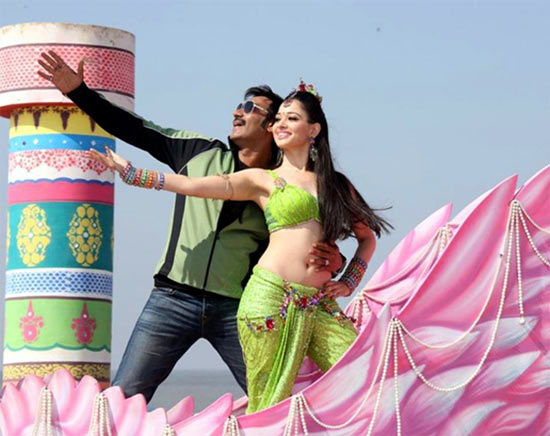 What was the most crucial thing for you when you decided to be a part of this film?

The look was very crucial for the film. Himmatwala came in 1983 and Sridevi had done the original film.

The films made in the 1980s weren't really the best when it came to fashion so we had to make the costumes and the look which would be relatable to today's audience and at the same time keep the flavour of the 1980s alive. The films made during that time were a little melodramatic so we had to keep that in mind too.

A lot of people are speculating that you are going to be the next Sridevi. Do you take it as a compliment?

The film hasn't released and I feel comparisons can happen when people have watched both the films.

It's not fair to compare me with Sridevi. There is only one Sridevi in Bollywood. She is a living legend and an iconic star. She has achieved so much. My character does have similarities to Sridevi's character of being a spoilt girl.

Are you a fan of her work?

I have always been a fan of her work. I remember when I was young I would recite her dialogues in front of the mirror. I have grown up watching her films and it was a treat to watch her.

'Critical acclaim won't change anything for me' 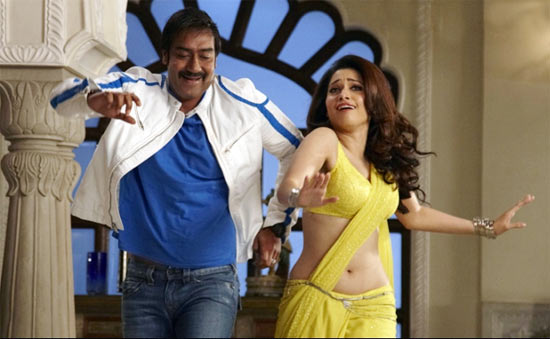 Sajid says he isn't interested in what the critics have to say about his film. How much does critical acclaim matter to you?

As an actor my jobs ends when my director is satisfied with my performance. I am enacting my director's vision and so he is the most important person for me.

Fortunately, I have had a good response for all my films. Critical acclaim won't change anything for me.

You must have been a schoolgirl when Ajay Devgn became a national phenomenon. What do you remember about him?

I have been a fan of his work. I really loved him in Omkara, The Legend Of Bhagat Singh and Hum Dil De Chuke Sanam.

He is an amazing actor. All the superstardom he has got is because he has been honest to his work which we also get to see in his performances. As an audience I relate to him and his films.

Why do you think Bollywood is so fascinated with South remakes?

We all love heroes in films and we all want the glorification to happen in every film. South films still continue to do that. They still make films depicting only heroism, but it's not their fault. The audience likes to see such cinema.

I guess in Hindi films that trend has come back, where heroes are portrayed larger than life -- and Hindi cinema lovers are also enjoying it.

'My brother is my biggest critic' 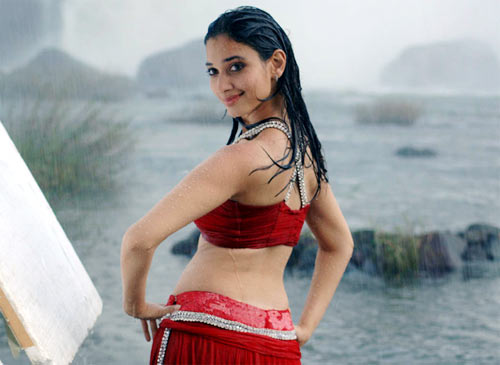 You started your career quite early. Do you miss the life outside this industry?

Since I was six years old I always wanted to be an actress and I am very happy with my work. I remember dressing up, applying make-up, wearing my mother's clothes and shoes which would never fit me and doing some nautanki (acting) in front of the mirror.

At the same time I was academically strong. I don't know how it would have been if I hadn't been an actress so there is no sense in missing my personal life. I grew up with all my friends like a normal kid. I always had my parents around me.

Do you consult your parents before signing a film?

No, I make my own judgement. My parents do give their opinion but the end call has always been mine. My brother is my biggest critic. He has a very honest opinion of my performances.

'Stardom is a very temporary phase' 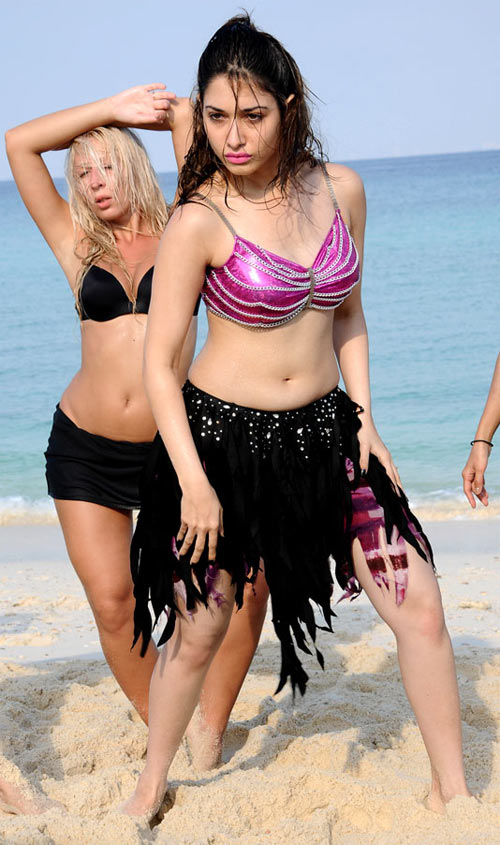 Do you think actresses can be friends?

Yes, absolutely. I am regularly in touch with Shruti Hassan, Ileana D'Cruz, Kaajal Agarwal. I am not in touch with Hind film actresses as I don't know them.

Is there anything that scares you about stardom?

I have never taken it too seriously. Stardom is a very temporary phase. It is just a by-product of the work that I do.

It is a humbling experience when you see the fans love you and appreciate your work but at the same time I take a practical approach and concentrate on my work.