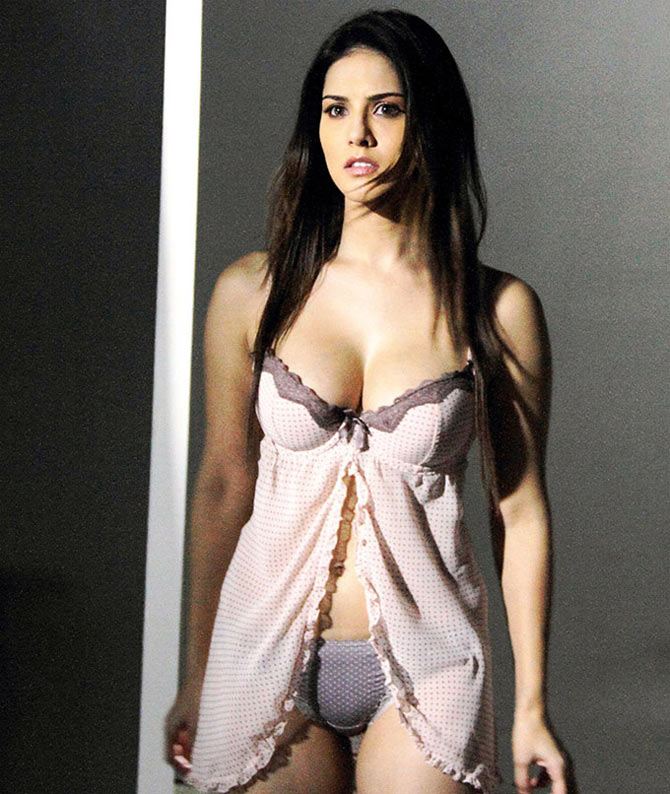 'In my world, mainstream is either what I am doing, or there is adult entertainment.'

'Every movie I watch of Priyanka Chopra, or Ranveer Singh, Hrithik Roshan, and Katrina Kaif, they are in gorgeous sexy costumes or no shirt, running around all oiled up and with wet hair. Is that not sexy? That's sexy.'

Awaiting the release of her third Hindi film as a lead, the spunky Sunny Leone busts some Bollywood myths about her work.

She is warm. She is charming. She is bindaas. She laughs and giggles even when you ask her embarrassing questions.

Over a span of four Hindi movies, she has successfully made people forget that she was once an 'adult entertainer'.

Sunny Leone (pronounced Leonee, she corrects, with her trademark giggle) says she is strong and determined and no one can stop her from doing what she wants to do.

"If you try, I will only get back up and start walking all over again," she says in this interview.

You are acting in Ragini MMS 2, a horror film. Do you get scared easily? What’s the scariest Hindi film you have seen?

I saw Ragini MMS, the first one, and I thought that was scary. The scariest scene in this movie (Ragini MMS 2) is definitely the climax.

The last horror Hollywood film I saw was VHS, when my husband was not home. I was so scared by the end of the movie that I didn't want to go outside to walk my dogs!

Are you fond of pets?

Yeah. I am fond of all animals… except for stinky ones. 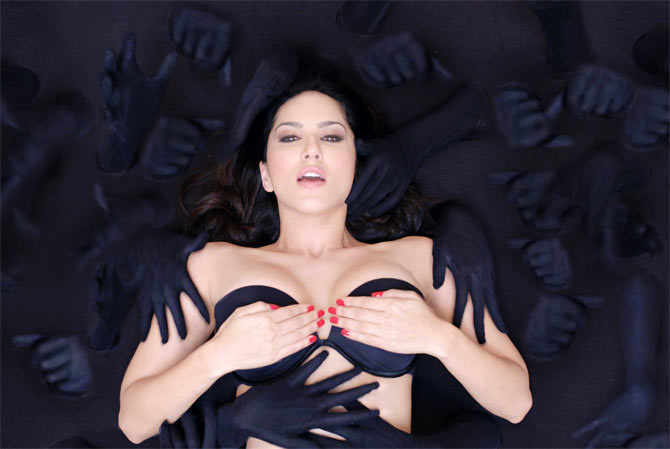 What was the toughest part to shoot in Ragini MMS 2?

Definitely the climax. I had to have that really out-of-body experience to get into this character.

It's a huge performance on my end having to become the character that they needed me to be and transform back and forth into this craziness. I wish I could talk about… it's killing me.

Do you want to talk about it?

I do want to talk about it, but that little one right there (pointing to the public relations executive) is about to give me that look. 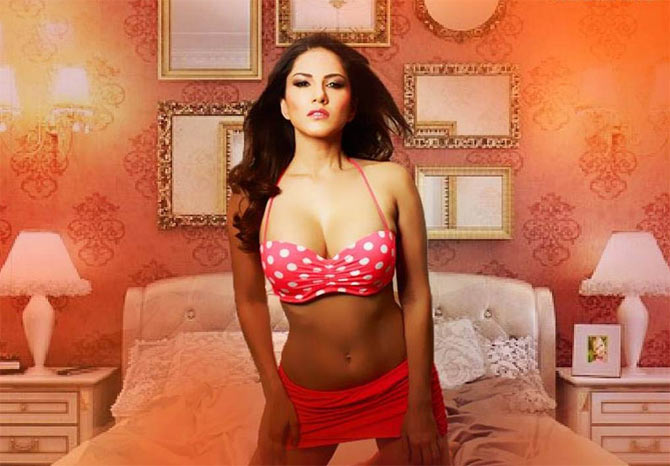 You were mobbed while promoting the film recently. Do you often get mobbed in the US?

No, not in the US. Sometimes, when I have done a couple of Indian events in the US it's gone really busy and we had to hire more security.

The thing is you can't freak out. There are so many cameras around. You have to stay pretty calm.

Naturally, the attention is nice but I don't want anyone to get hurt.

I don't want somebody to get violent or have a situation that could create the type of atmosphere that becomes very scary.

I am a peace-not-war type of girl. I am a lover, not a fighter.

'I haven't experienced any paranormal activity in real life' 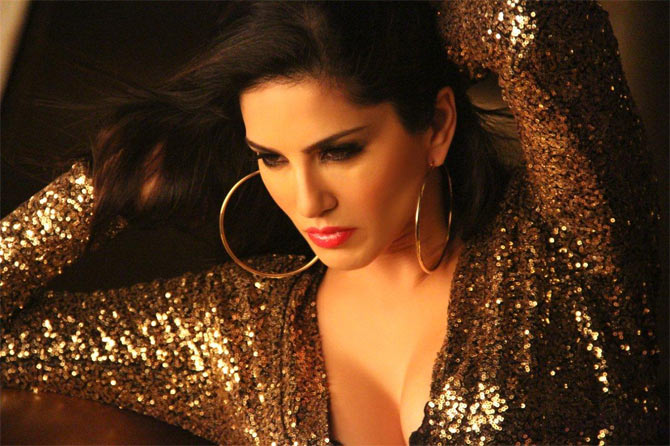 Indian horror movies are mostly about sex. Do you think titillation is necessary in Hindi films?

I think there definitely has to be a balance (between sex and horror).

I think India loves the idea of both (sex and horror) meeting together. But it is something that is completely normal: balance between horror and sex.

What is Sunny Leone scared of?

I am scared of bugs. Usually machchar (mosquitoes).

I hate those things. When we were shooting the lake scene for Ragini MMS 2 there were these tiny little fish touching my feet and that totally freaked me out.

If there were leeches in the water I’d have probably said pack up, I am going home, see you later.

Have you experienced paranormal activity in real life?

No, I haven't experienced any paranormal activity in real life. Nothing like that has ever happened to me. I don't really believe in ghosts.

'My next is a women-centric action movie' 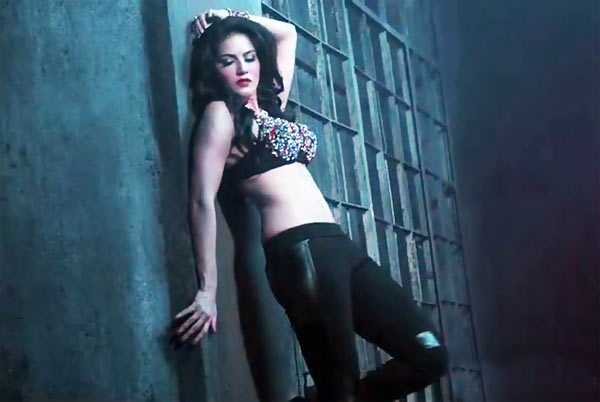 They are two completely different stories. One is a thriller type of suspense movie and this one is a horror movie.

The next movie that I am making is completely different too.

Do you play the lead role?

Could you tell us more about this film?

I can't. I can after the 21st (March, when Ragini MMS 2 will release in theatres). 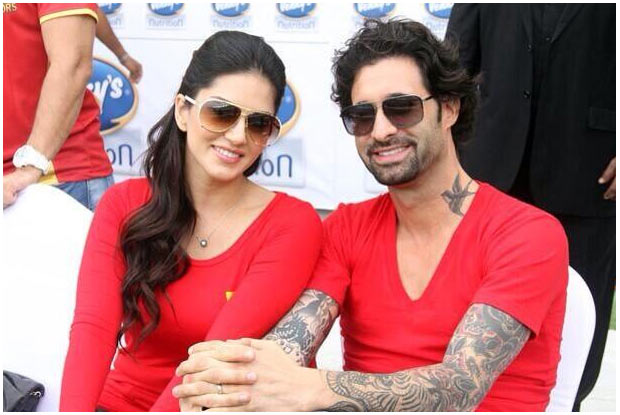 It has been said that after giving up adult films you have still not got mainstream Hindi movies. Do you agree?

That's mainstream to me.

If that's not mainstream, I don't know what is. One needs to ask the definition of mainstream to whoever poses such questions.

In the US, I have been on MTV, VH1, and E Entertainment. I have done a couple of different shows there that are mainstream. Those people should just look up Wikipedia.

In my world, mainstream is either what I am doing, or there is adult entertainment.

Do you still get three scripts a day and how do you choose scripts?

I don't know about three scripts a day but this morning I coincidentally read two synopses that were really interesting.

What do you mean by 'serious scripts'?

Do you get scripts because people want to meet Sunny Leone?

Yeah. But I have a process now of handling this thing.

My husband (Daniel Webber) gets the scripts, I read them. He meets the company first to see how serious they are about making a movie with me in it.

People send scripts just because they want to meet me and take photos. If that's what they want then it doesn't need to be a hidden agenda.

'I don't have too many friends here' 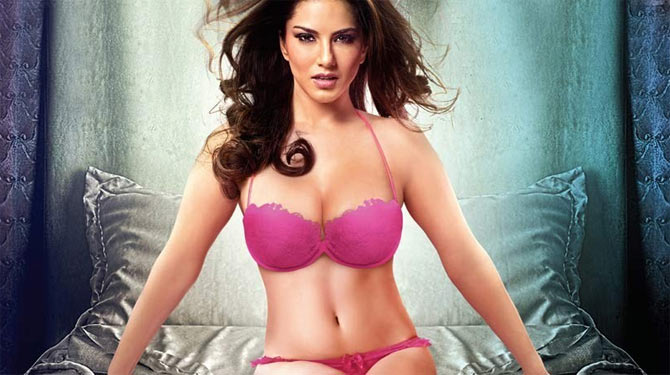 I don't have too many friends here. I work a lot. But I am still friends with a couple of people from the Bigg Boss show like Pooja Bedi and Juhi Parmar.

Juhi just had a baby a year ago and I attended her birthday party this year.

In one of your interviews you said that you want to do something different, but in most of your movies you play sexy roles. Do you think…

(Interjects) but the movies are different. The sexy parts are the sexy parts of the film. You can't escape those.

Every movie I watch of Priyanka Chopra on TV or Ranveer Singh or Salman Khan or Hrithik Roshan or Katrina Kaif, they are in gorgeous sexy costumes or no shirt, running around all oiled up and with wet hair. Is that not sexy? That's sexy.

We watch cinema because we find those people attractive. The movies that I have done are all different from each other.

Yes, they are sexy because the role required it. The next movie that I am doing is very sexy but different again than what I have done in Ragini MMS 2. 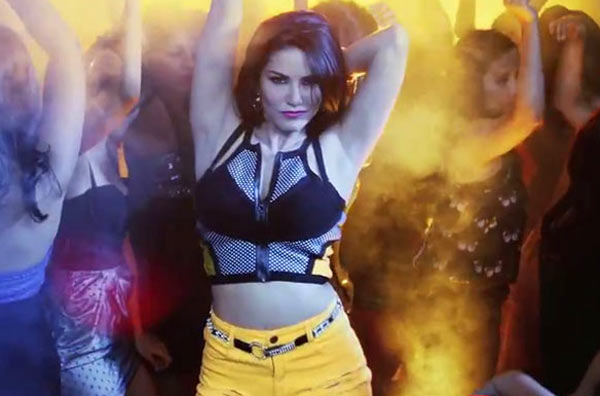 Your message to India's women…

All the women out there -- do what you want to do in life.

Be strong and happy with your life and with every decision you make. Don't regret it.

Values that you cherish as a woman?

I cherish the idea that I am strong and determined and there is no one who can stop me from doing what I want to do in life.

There is no one who can bring me down.

If you try, I will only get back up and start walking all over again.