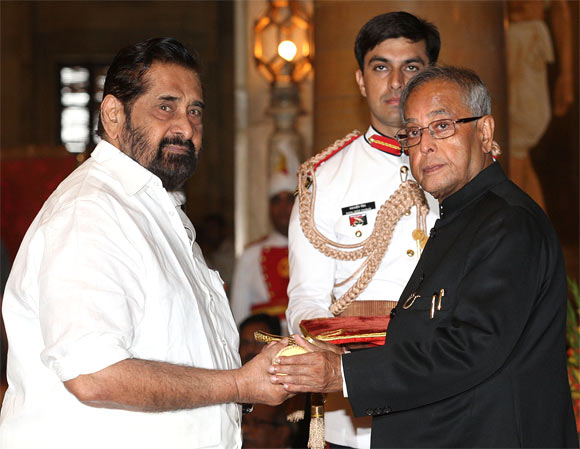 The journey that started in 1963 has been extraordinary and immensely successful and satisfying. Last year, he was honoured with a Padmashri.

Here, the 79 year old actor in an exclusive interview, goes back in time.

50 years in the industry

When I started out, my plan was to work in films till I die. So, completing 50 years is no surprise for me. This is what I wanted and what I am doing even today. The only reason I have completed 50 years is, I have not died till now.

Back at National School of Drama (NSD) after 50 years

I belong to the first batch of NSD and had studied there for 3 years. But in those days, NSD worked in a rented building but today, they have their own building, a beautiful one.

When I went to Delhi to collect the Padmashri, I went to NSD where it all began. I saw the same peon who was there when I was a student there. Perhaps there is no retirement for him; he is still there. Though I did not recognise him first, he was happy to see me after 50 years.

Most of those who studied with me are no more now. Karanth was my junior, and he is no more. Sai Paranjpayee was my immediate junior and actors like Naseeruddin Shah, Om Puri, etc joined only after I left.

'I had no desire to be a professional actor' 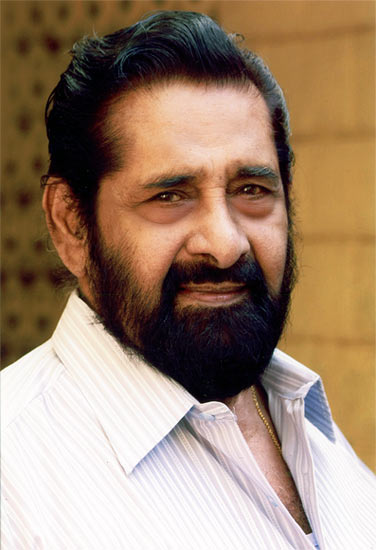 From a college lecturer to studying at NSD

I was working as a college lecturer teaching Hindi in Nagercoil, but I was passionate about theatre even as a student. Cinema was never an influence as only four or five Malayalam films released in a year in those days. I had no desire to be a professional actor. Theatre always attracted me but there was no scope for any training in India in the late fifties.

In 1959, when the National School of Drama started in Delhi, I decided to resign my job and join NSD. My parents, friends and colleagues were horrified. The minimum qualification for admission at NSD was Matriculation and here I was a postgraduate and a lecturer chucking my job and applying to study there!

But I had no qualms about doing that as I knew if I wanted I could get a job in any other college after two years.
Tags: National School of Drama , Malayalam , Matriculation , Nagercoil , Delhi 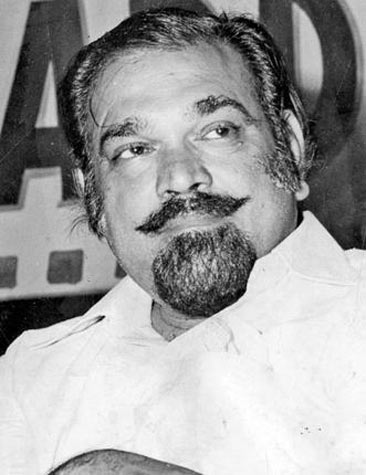 Dreamt of being an entrepreneur

My plan was to start a parallel college in Kerala after my studies at NSD, where drama would also be taught. I wanted to train students and working professionals in drama.

On holidays, I wanted to travel all around Kerala and India with my drama troupe and perform at serious art societies.

All my plans went for a toss after I met Ramu Kariat in 1962. I was introduced to him at a function in Delhi. He asked whether I was interested only in theatre and not cinema. I had nothing against cinema, I said.

Then he said he was making a film titled Moodupadam based on S K Pottekat's novel and he offered me the second lead in the film. Sathyan was the hero. But I had three more months for the course to end.

Kariat told me to go to the production house in Madras when I went back to Kerala after the course so that they could see me and also do a make up test.

When I went there, the shooting of the film Ninamaninja Kaalpaadukal was going on. After the test, they wanted me to do a small role in the film, and I did. And, it became my first film, though Moodupadam was the first film offered to me.

If I had not done the course at NSD, I would have been nervous facing the camera and may have failed the make up test too. In fact, when I was a post graduate student, I had failed an audition test at All India Radio because I was so nervous and didn't know how to modulate my voice.

NSD was a good place to polish your skills. You got experience in everything connected with theatre-- from carpentry to painting to make up to creating sets. 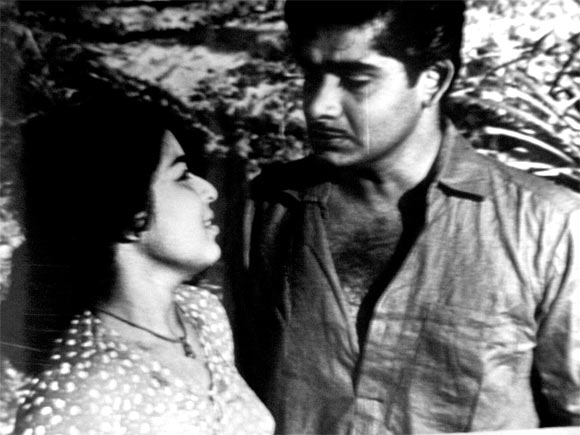 Image: A scene from Chemmeen

Chemmeen is one film experience that can never be erased from my memory. I remember every moment I had spent shooting the film. There were thousands of people on the beach to see the shoot. 40 years later, fishermen of that area had arranged a function at the same place. Those who were there to see us were not even born when the film was first released.

I feel I was born to do the role of Pareekutty in Chemmeen. You know why? I was an avid reader as a student and one novel that left a deep impression on me was Thakazhi's Chemmeen. As I had read the novel several times, when I went to act as Pareekutty, it was as if I was becoming a character I knew so well. I never ever felt that way about any other character in my entire career.

Pareekutty was one lover who had no other intention but love Karuthamma. His love was pure and genuinelove was like bhakti for him. He didn't want anything from Karuthamma. It is this pure love that made Pareekutty alive even today. That is why even today, Preekutty's words- Nee poyalum njanivide paadi paadi nadakkum- have become immortal. 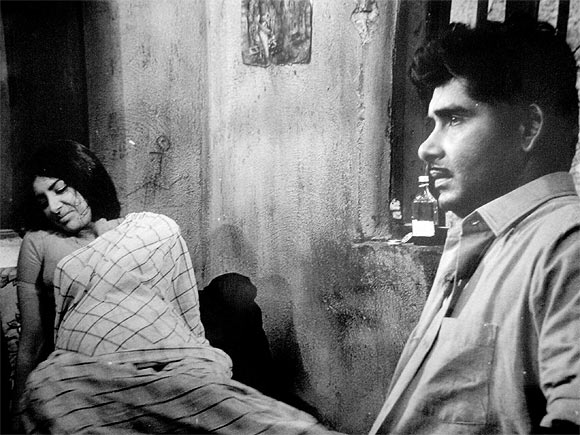 Image: A scene from Swayamvaram

I had known Gopalakrishnan and his devotion to films even before he went to study direction at the Film and Television Institute of India. I would say he is one of the few directors who took cinema seriously and did everything systematically and academically.

When you act in commercial, mainstream films, there is a lot of improvisation on the sets. But in Gopalakrishnan's films, everything is planned perfectly.

In Swayamvaram, you were part of a great product designed by an architect called Adoor Gopalakrishnan. 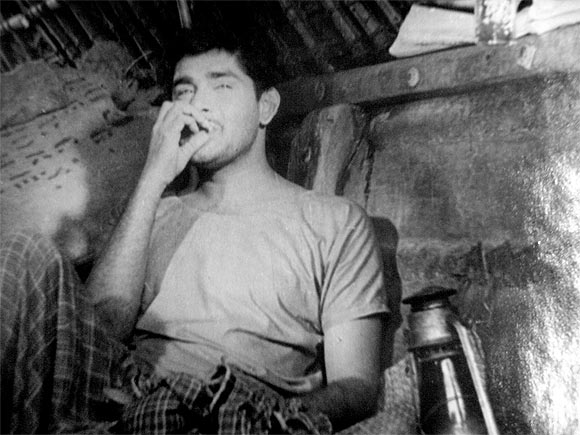 When I acted in Chemmeen, I was acting with the best technicians in India--Ramu Kariat, Salil Chowdhary, Markus Bertley, Sathyan, Kottaraka Sreedharan Nair, etc. I was the junior most in the film.

Olavum Theeravum was made by young, new people. It was unique in that it was the first film that was shot entirely on real location. The entire experience was such that we were putting all our energy together for a product that involved all of us.

If Chemmeen was made by experts with all the luxuries, Olavum Theeravum was made on a shoe-string budget by youngsters. It was an experimental venture. But like Chemmeen, this also became a landmark film in the history of Indian cinema. 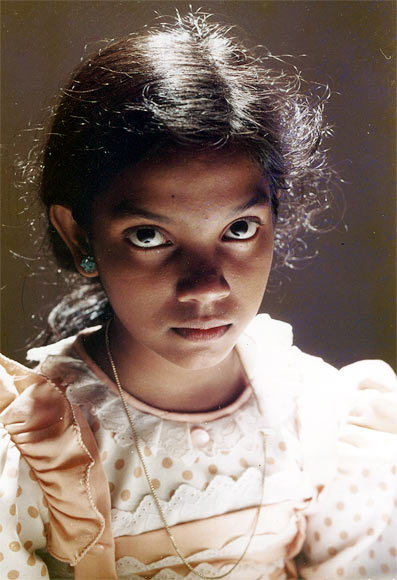 Image: A scene from Mini

In those days, there were not many studios in Kerala except Udaya and Merryland. Almost all the film shootings were done in Madras.

When I started my own production house in the 70s, I wanted to shoot my films at my own pace in a studio. That was when the idea of a studio of my own came to my mind.

Though studios are never a good business proposition, I wanted one. It was like living in your own house. Also, I had the intention of making Malayalam films in Kerala. I had this entrepreneurial streak even when I was a student.

I had to close down the studio as films started moving out of the studios by the 1980s. In fact, some of my last productions were also shot outdoors. 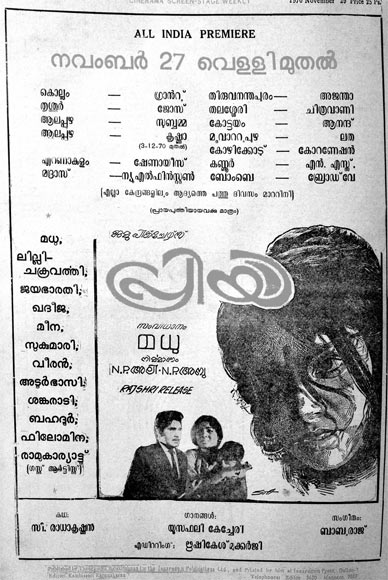 Directing the award winning Priya in 1970

The story behind the making of Priya is a bit unbelievable. As I was coming back after the shooting of Saat Hindustani I met a gentleman in the flight. He wanted me to make a film on a girl trapped in the red street in Bombay. That was the trigger. When I reached home, there was a post card waiting for me from a stranger who wanted me to read C. Radhakrishnan's short story Thevidissi, and make a film on it. It was the story of a young girl from a Warrier family trapped in a brothel in Bombay. That short story became Priya the film.

It was Sarada who was to act as Priya in the film but when she won the national award for Thulabharam, she was signed to act in the Hindi, Tamil and Telugu remakes of the film.

The girl Priya was an innocent looking girl, and I didn't find anybody in Malayalam who could portray her. So, I decided to go to Calcutta in search of a heroine. I was very close to Utpalda (Utpal Dutt) and he suggested Lily Chakravarthy's name and it turned out to be that she was perfect for the role.

I decided to portray the bad character in the film. In fact, in all the films produced by me, I have acted as bad people as other directors and producers never gave me such characters!

My favourite among the films I had directed is Sathi based on the play Mezhukuthiri by G. Sankara Pillai. I always wanted to make films out of unusual stories.

I have stopped making films as I could not move with the times. There is no point in making films in my style and say that people don't accept them.

'I have enjoyed being a producer more than anything else' 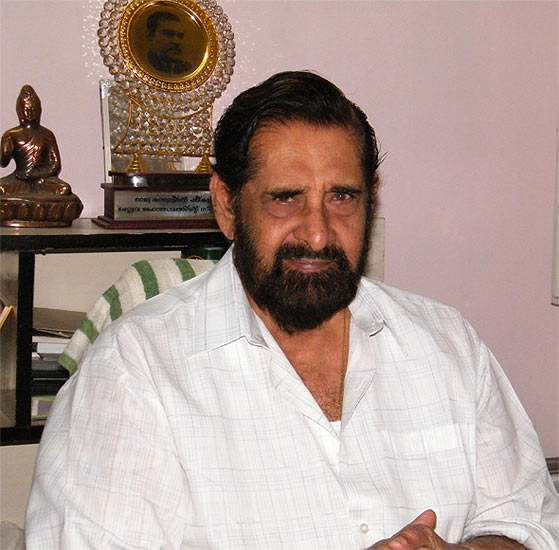 When I completed 50 years in the industry, one director I could never forget is Ramu Kariat. He asked me to act in films and then he gave me Chemmeen.

I must have acted in over 350 films. I have worked as a college lecturer, actor, director, producer, entrepreneur and an educationalist, but what I enjoyed the most was my role as a producer where I can make the films I believe in though the role of the producer is misunderstood in India.

The journey from Madhavan Nair to Madhu

When my first film Ninamanija Kaalpadukal was released in 1963, I went to watch the very first show. I was so disappointed not to see my name though I had a major role in it.

I came back and asked the producer why my name was not there. He said my name came after Prem Nazir. Then he told me that they had changed my name from Madhavan Nair to Madhu!

They didn't let me know fearing I would object to the name change. I thought it was too short but I couldn't do anything about it. So, I continued my journey as Madhu!