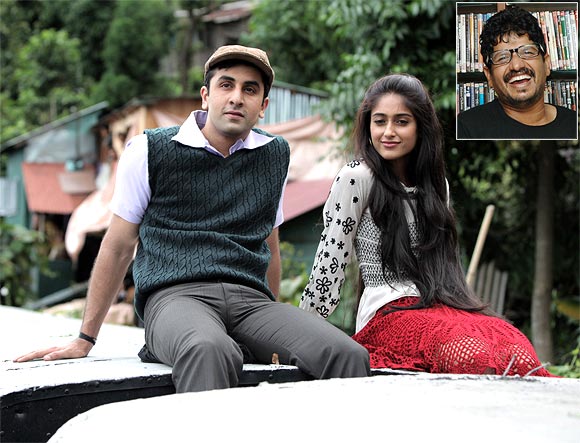 Ravi Varman has no training in cinematography but has made a name for himself cranking the camera for directors like Shankar, Jayaraj, Priyadarshan, Honey Irani, and Revathy.

He won the best cinematography award at the 23rd International Film Festival in France for Jayaraj's Malayalam film, Santham.

There was a time he was so dissatisfied with life that he went to a railway track to commit suicide but today he says all his dreams are being realised!

After your first directorial venture Moscowin Kaveri failed, you were silent.

When you move from one job to another, you may succeed or not succeed.

Nothing has been easy for me in my life. In all my moves, whether from assistant cameraman to independent cameraman, and from that to a director, it has always been a difficult journey.

That was what happened to me with Moscowin Kaveri. My journey as a director was totally different from what I had done as a cinematographer for 26 films.

'Life has been a big struggle for me throughout' 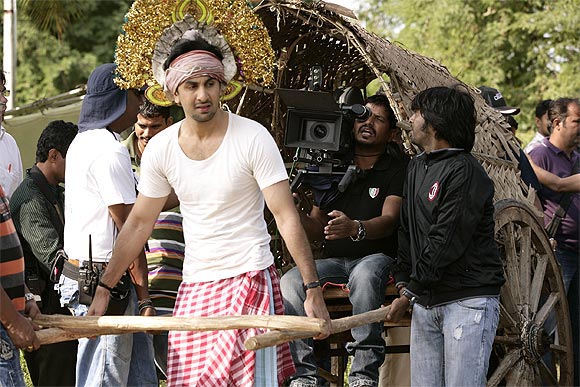 What have you learnt from these 26 films?

Each film is a different learning experience. All those experiences and also my experience as a film-maker have helped me shoot my latest film, Barfi!.

I was amazed at the kind of response I got from people after the trailer was out.

I always go for realism and natural light while many prefer to light the face of all artists fully.

In real life do you see everything like that? Life is full of shadows. I have learnt this from my own life.

My life has been full of shadows all the time. Life has been a big struggle for me throughout.

To shoot a film like Barfi!, which is about challenged people, how did your experiences in life help?

I must tell you something about the film. The concept is good, the director is good, the actors are talented and the places where the story takes place--Kolkata and Darjeeling--are so full of life.

All these positives gave me a lot of energy and space to work and experiment. There is more silence on the screen than noise. 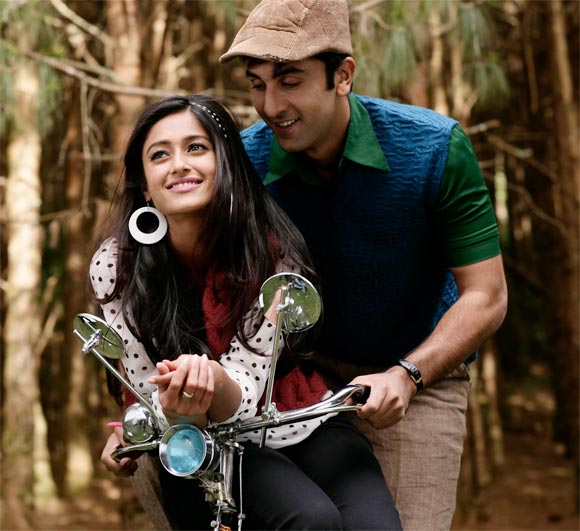 How challenging was capturing silence?

It was easier. When you film people who cannot talk, you have a lot of possibilities. When people talk, you look at their face on the whole and listen to their voice.

On the other hand, when a person who cannot talk expresses something, we look at the most minute details on his/her face to understand what s/he wants to convey. There is emotion in their expressions and that gives you a lot of possibilities.

How did you get to be part of Barfi! ?

Anurag Basu (the director) had seen my work in Revathy's Phir Milenge and liked it. That was how he called me.

Phir Milenge was made many years ago...

Yes, it was made in 2004 but the beauty of the film is that it still looks fresh.

Nature is supreme and above all of us and only when you try to change nature by adding light to it, that you get disturbed and artificial images.

'Barfi! is a bright film about beautiful people' 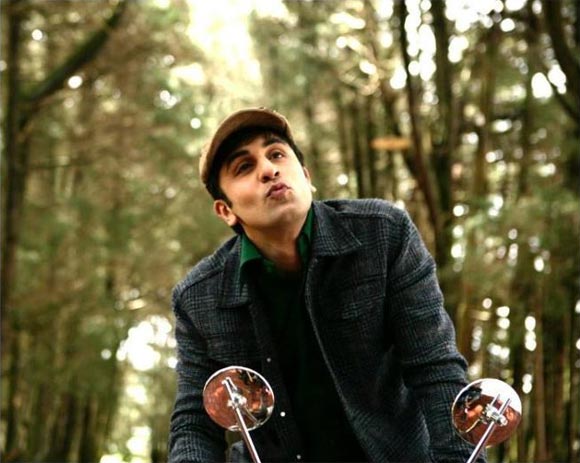 What attracted you to the story?

I like either extreme dark or extreme brightness in life. Generally, film-makers tend to make tearjerkers on the lives of deaf and dumb people.

In the case of Barfi!, there is no sadness; it's a bright film about beautiful people. That is what attracted me.

Anurag was very clear about one thing, that he would not make a depressing movie on the lives of deaf and dumb people.

How do you capture life and its moments through your camera?

What is life? If you look around keenly do you see only one image? No.

You watch a Fellini film and tell me what you see in each frame. Today, we talk about the hidden camera, and in a way, that was what he achieved through his camera. If you look at a frame, you will see not only the lead actors, there will be a lot of activity behind them, and that is what life is.

How did you start using only natural light from the beginning?

The first film I did was Jalamarmaram, a Malayalam film for T K Rajeev Kumar.

I shot my first film using only natural light as there was no money for generators and we had to finish the film in 12 days. I had no other choice but to hunt for natural light.

Then, I did Jayaraj's Santham and it was even more challenging as I had to shoot the film in rain and also in natural light.

Funnily, I had difficulty only in the beginning. After that, I became so comfortable being part of nature.

Yes, I was scared whether I would get good images but it was thrilling and challenging to shoot such films. Incidentally, I won the best cinematography award at the 23rd International Film Festival in France for Santham.

When you work for such small budget films, you try to reduce expenditure by depending only on natural light.

Later on, when I got big commercial films to work on, I wanted to work the same way, using only natural light.
Tags: Santham , International Film Festival , Rajeev Kumar , Anurag , Jayaraj 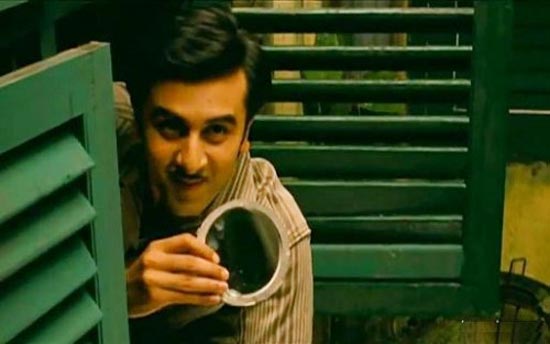 How did the directors of commercial films react to your way of shooting films in natural light?

Fortunately, they call me after seeing my work. So, they appreciate my style of shooting.

After seeing the Barfi! teaser, everybody says Ileana never looked so beautiful. I know that it is the duty of a cinematographer to make everyone on screen look gracious and beautiful. When you use natural light, the feel will be soft and not sharp.

The two cities where you have shot Barfi! are quite different. Kolkata is a crowded city and Darjeeling, a beautiful hill station. How did you capture these two places?

I went to the shoot at 4.30 in the morning and the shooting started at 5 am. When nature is there in front of you, you don't have to plan anything.

We shot on real locations without any light. When you are shooting in natural light, you have to be fast lest you lose the feel of that particular time.

Kolkata, which once was the pride of India, is extremely polluted and dusty today. The same is the case with Darjeeling. Wherever you go, you see only plastic and garbage.

But the Kolkata we show in this film belongs to the 1960s and 70s. Though it has become dirty, the texture is still the same. In most of the old buildings you still see old pictures but dusty and full of cobwebs. Some places really stunned me.

It was the first time that I was shooting in Kolkata and I really liked it for its uniqueness. Like in a Fellini film, I could capture life beyond the actors for the film.

How will Darjeeling look in your film?

Usually, you see hill stations as cool, misty places but I haven't treated it that way though we shot during winter.

On the other hand, I have given a cooler texture to Kolkata in the rains. 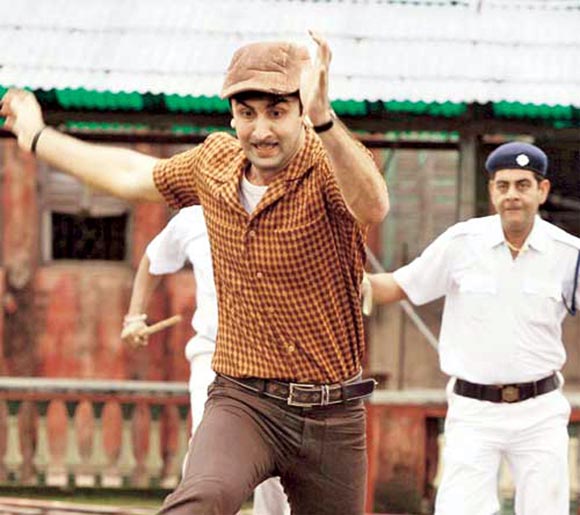 Did you find it interesting to work with Ranbir Kapoor?

Though he comes from a film family, he has made an effort to learn cinema and has an individuality of his own. I liked it.

You are going to work with Sanjay Leela Bansali in Ram Leela. How did that happen?

I had this dream of working with two Indian directors: Mani Ratnam and Sanjay Leela Bansali.

I consider both the best visual makers. Mani Ratnam never goes abroad to shoot any of his films. Nobody has captured India like he has done. You have seen Kerala in many films but in Mani Ratnam's films, it has a mystique quality.

Sanjay Leela Bansali is the best in creating a scene. Each frame of his is like a painting.

So, while working for Barfi, I had gone to meet him. We had a formal chat and I told him I had this dream of working with him.

He had not seen any of my films but he liked my attitude to work and offered me his next film, Ram Leela.

After the trailer of Barfi! was out, he said, I like your visuals. 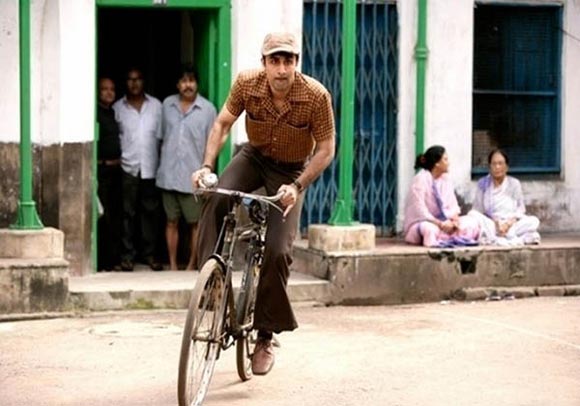 Do you describe Barfi! as a commercial film?

You have worked in a pucca commercial film like Badrinath and a film like Barfi! now. How do you compare these films?

If Badrinath is like a wedding sadya with all kinds of food being served, Barfi! is like a sweet dish.