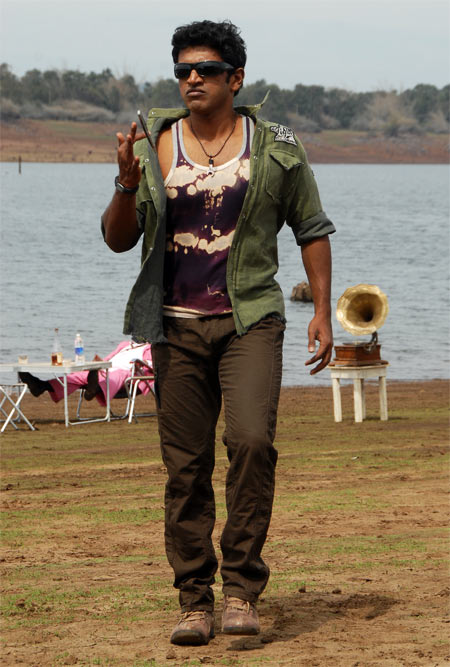 Puneeth Rajkumar's much-awaited film Anna Bond will release on May 1. Buoyed by the success of his television show Kannadada Kotiyadhipati over the last few weeks, the pre-release hype surrounding Anna Bond is reaching a crescendo.

In this interview with Srikanth Srinivasa, Puneeth Rajkumar talks about Anna Bond and what his fans can expect from the movie.

What is your role in Anna Bond ?

Anna Bond is the name of the character I play. Colloquially, we address someone among a group of friends as 'Bond' because of the way he carries himself.

It is a different role from what I have played so far. Anna Bond is a local character.

Will audiences get to see you in a new avatar?

It is not a Bond film. I am just Bond Ravi who becomes Anna Bond. It is just inspired by the name Bond.

My character is different from what I have played so far. It is very entertaining. The protagonist talks well, fights well and dances well. There is good humour.

'The film will appeal to all sections of the audience' 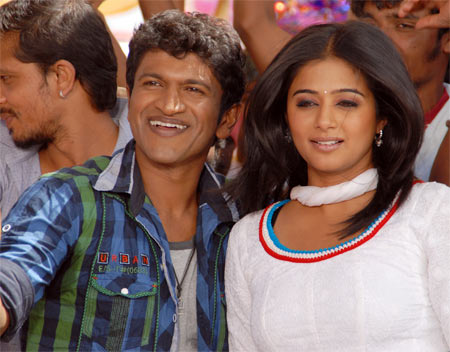 Image: A scene from Anna Bond

What can your fans expect from this movie?

The fans and the audiences from our state can expect everything.

The film will appeal to all sections of the audience. It all depends on how they take it and what levels they want to take it to.

What went wrong with your previous film Paramatma which fell below expectations although it was not commercially a flop?

I really don't know. I think audiences felt the film was too soft. Some felt that the storyline could have been better. Everyone has an opinion. Some sections of cine-goers did like the film. Some found a few flaws.

We were not in a position to analyse during the making of the movie. Every film is an experience. We make films thinking some things may look new. Audiences didn't relate to the film the way we thought they would.

'I have never been dependent on one kind of character' 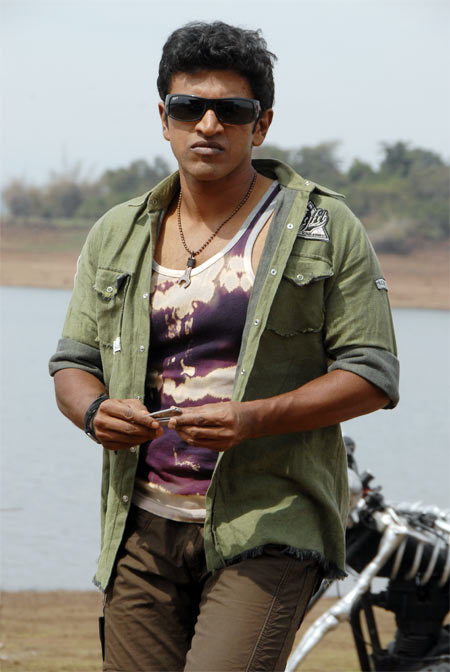 Why did you go for an image makeover with Paramatma and Jackie especially after being seen in family entertainers like Milana, Arasu and Prithvi? Did commercial interests overtake other considerations?

There has been no image makeover as such. I have never been dependent on one kind of character. It is the script that attracted me to take up these offers.

I felt Paramatma was new and I could try something different. Yogaraj Bhat also felt that the role would suit me. As an artiste I got an opportunity to do something new and learn things, including improving my language. It was like getting into another genre of performance.

It is not a question of commercial or non-commercial. I don't treat a film as being made for the classes or masses. I take up an offer because it is made for our audiences. I don't differentiate in that way. You cannot have a film with a set formula.

'You cannot have a film with a set formula' 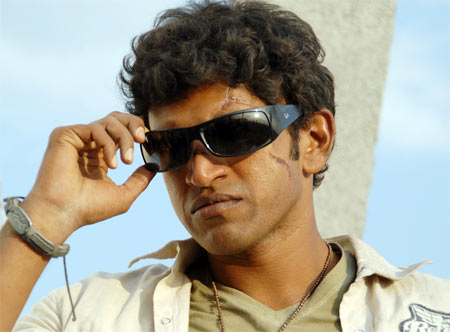 How do you react to people who say you are more at home with the same people who worked with you in Jackie and made it successful?

What is the problem if a successful team comes together to make another film? Isn't it good if you know the company you work with?

We also did a film called Hudugaru, which was a huge success. It could be a remake but it was made by Madhesh who directed my earlier film Raam.

The script should excite me, my family members and especially my brother Raghavendra. We look at the scripts that come in and that sound interesting.

How has your family production house coped without your father Rajkumar and your uncle Varadaraj who used to give inputs at the scripting and production stage?

We have made some films after both of them passed away in 2006. The show must go on.

My brother has taken their position and has been with me ever since I started my acting career in Appu. My brother's inputs have always been there.

My father and my uncle's blessings are there with us. It is my brother who is involved in finalising scripts for me and the people involved in the film's making.