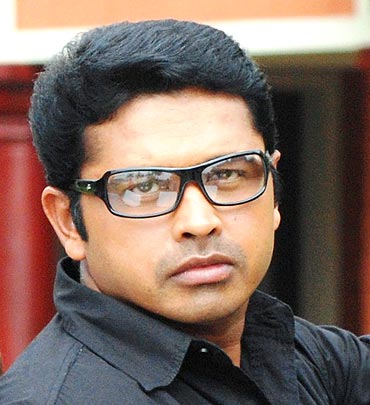 It's usually cricket time in the Santhakumaran family with Sreesanth in a stellar role. But this time round, it's his brother Dipusanth who's grabbing eyeballs, with his debut movie Kana Kombathu opening in theatres across the state of Kerala.

Deepak Warrier caught up with Dipusanth on the eve of the film's release to ask about his expectations from the film, his inspiration, and, of course, his take on his celebrity brother.

There's been a lot of publicity about your first film and a certain level of expectation. What do you feel like at this moment?

To be very frank, I really can't express what I feel. It was pure fun for me when the shooting started. But as it evolved, I found myself getting more and more involved in it and every second was learning for me. Being new to this industry, of course there is tension, but I'm at home with my family and with their support I can overcome it.

Where is Sreesanth? Is he sharing these tense moments with you?

Sree is in Bangalore. He could not be here with me as his routine training at National Cricket Academy is going on. But we keep talking at least twice a day over the phone. I really feel relieved when I share my tensions with him.  He has always been my best friend. All my family is with me to support me. It's a happy moment.

What is the film Kana Komabthu all about?

The film is a strong statement against the issues existing in the medical science industry. If I am not wrong, not many movies have been filmed on this subject.  It's a bold movie and I am happy to be a part of it.

'I never dreamt of being on the silver screen' 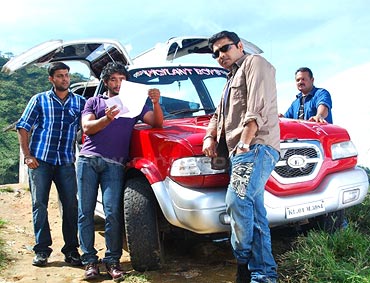 How exactly did it all start? Was getting into movies on the cards one day or another?

It all started when the director Mahadevan met me at our restaurant S36 and told me he was interested in casting me in his new movie. I must thank the director Mahadevan, Madhu Muttom and producer Leela Prassanan for placing me comfortably in my acting shoes. I never dreamt of being on the silver screen but always had a liking for movies.

What kind of role do you have in Kana Kombathu? Was it something you were expecting?

To be frank, I did not have anything in mind. When the director said there are negative shades to my character, I was not sure about my acting skills (in carrying it off) but my brother and my friends said to take it up and so I took it up as a challenge and decided to put my hundred percent into it.

Who was your biggest support during the movie schedules?

If I start naming the people who supported me, we would end up chatting only about that today. I have been supported with loving tips, caring thoughts and wishes by all my near and dear ones. Sree was playing the World Cup when I was shooting for the film. In between his busy schedules, he made it a point to call me every day to enquire about the proceedings on the sets. That was a real energiser for me.

My brother-in-law, Madhu Balakrishnan is a celebrated singer in South India and he also helped me immensely with a lot of industry related tips and advice. My close friend and business partner Deepak was there throughout as a support for me during this period.

'I am really proud to be known as Sreesanth's brother' 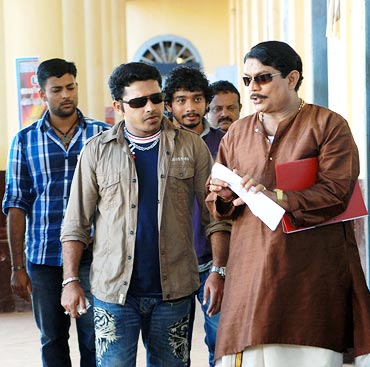 Have you ever felt bad that you are often referred to as Sreesanth's brother?

But if Sreesanth wanted, he could have helped you get a break in Bollywood. Then why start with Malayalam films?

I was into business and did not have any thought of acting till Mahadevan invited me to do so. Sreesanth is an international cricketer and he has many friends and well wishers across the globe for sure, but we both believe in making our own way. If I have the skill, definitely more offers will come my way. Everything is decided and happens only as the Almighty decides.

You are all set to become a celebrity. How different would you be from Sreesanth as a celebrity?

Each individual has his or her own characteristics and the moment you start following someone, you lose your personality. I believe that. I have a strong feeling for my family and friends. They will forever remain my priority.