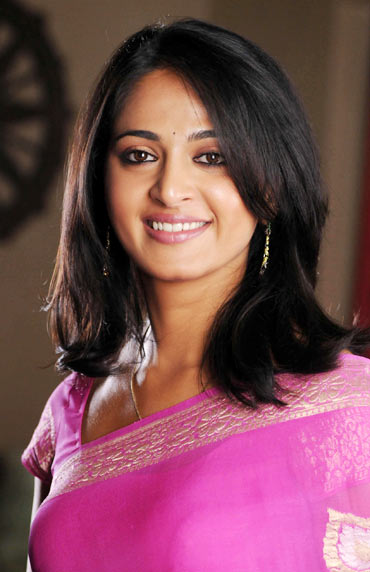 Pretty and tall Anushka Shetty who made her debut in Super is as sweet as her pet name, Sweety.

This former yoga teacher, a 'disciple' of Bharat Thakur, has been choosing her roles with care. She has acted with most of the big names (Nagarjuna, Venkatesh, Jagapathi Babu, Ravi Teja, Prabhas, Gopichand) and continues to do so (Mahesh Babu) in the Telugu industry.

Arundhati catapulted her several notches higher. Not only was Anushka's acting in this film (where she did a double role) appreciated, the film also became a critically acclaimed and commercial blockbuster.

Taking out time for this exclusive one-to-one over lunch, Anushka fielded questions on her upcoming releases Vedam and Panchakshari, (scheduled for a back-back release on June 4 and 5), her super-duper hit Arundhati, acting and yoga. Excerpts: 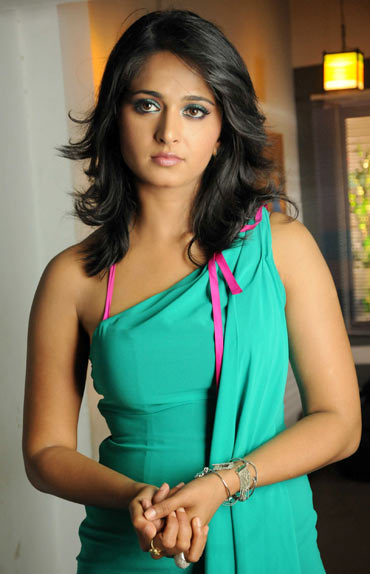 After Arundhati, you are doing Panchakshari -- another heroine-oriented film. The film is being produced by Bommadevara Ramachandra Rao (Chandra) who rose to a producer from a make-up man. Nagarjuna is also presenting this film. Did this also influence your decision?

Chandra was the first to do my make-up. At that time, he asked me whether I would act in a film produced by him. I have known him from day one. He had two-three scripts and finally zeroed in on Panchakshari.

I'm doing the film for Chandra not Nagarjuna. He has put 500 per cent on the script and knows it inside out.

Comparisons with Arundhati are bound to arise. What is Panchakshari about?

Arundhati is a revenge drama and a lady fighting. It was about re-birth. Panchakshari is set in real time -- the story of two characters Honey and Panchakshari.

It's a simple story of these two girls. Panchakshari is born in a village and she is a shy simple girl. In contrast Jejamma (of Arundhati) was powerful and could head a clan. Honey, the other girl, is more modern.

'The more difficult the role, the more I am loving it' 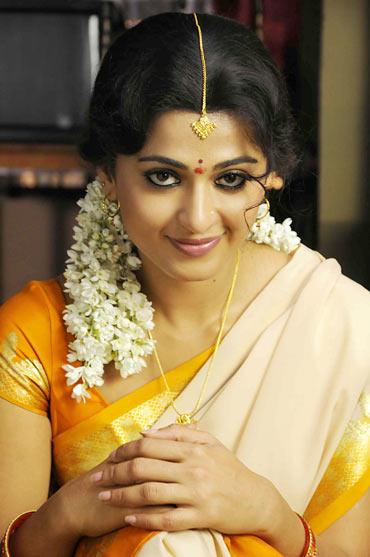 You sport a traditional as well as a glam look...

They are two different characters. One is outgoing while the other is soft and lovable. To get the look right is important. We worked to make Honey modern. The more difficult the role, the more I am loving it.

After a challenging Arundhati, how was it doing Panchakshari?

In all the movies, it is the same. Arundhati was my third film. People keep comparing Panchakshari to Arundhati. Panchakshari is Chandra's child. Arundhati was a heavy role. Your confidence levels keep increasing as you do more movies. Each film is like learning a lesson. It's easy to play a character but playing yourself is difficult.

Any special highlights of the film?

We wanted to make Panchakshari an extremely vulnerable character. I have seen rushes of the film and I think I have achieved it. Music is not pushy. It's not just to attract the audience. We have the mantra.

Brahmanandam's comedy is another highlight. There is a parody on Magadheera.

'I play a prostitute in Vedam' How was Chandra as a producer?

He's passionate about his work. He was there from the first shot to the last. He's extremely clear on what he wants. He talks about the movie like a mother talks about her child. He dreamt of making this film and has put in all he can. He has the potential to be a good producer. He doesn't talk about the budget unless very necessary.

How was it working with director Samudra?

It was the same director and crew of Mahanandi. Samudra was extremely patient. I have never seen him stressed out. Everyone worked like a team. He is sensitive about scripts and updated on cinema all around the world.

Does the success of Arundhati weigh on your mind while signing other films? Also Arundhati was critically acclaimed and commercially successful?

If you have a good movie in hand and it is successful, you gain confidence to experiment. I didn't want to do yet another similar role. So when Krish came to me with Vedam , I jumped at it.

What do you play in Vedam?

I play a prostitute. It's the story of five different people connected by a thread.

Last year you did an ultra-glam Billa after a traditional Arundhati a total contrast where you showed a super-toned body. Was it yoga that helped you in this?

I loved doing Billa after Arundhati. Yoga is a part of my life. Bharat Thakur is my guru and yoga is not just physical yoga, there are different levels. Yoga made me open to learning; it helped me reflect. As an actor, I don't want an image. I want people to see the character, not me. One has to take the risk and chance, it will get you down or pull you up.

'I don't get carried away by my heart' 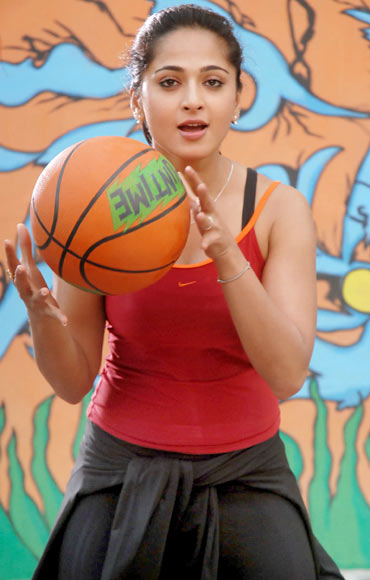 On what basis do you choose roles?

There's no basis, I have to like them. Now I don't get carried away by my heart. Sometimes it could be just working with technicians or a great director or artist or script.

A film directed by Trivikram Srinivas with Mahesh Babu. I have shot quite a bit for it. It should be ready in August. There's a film with Nag (Nagarjuna) produced by Siva Prasad Reddy, with Venkatesh (Chandramukhi 2) and with Ravi Teja.

Did you dream of acting?

No. I was teaching yoga and E Nivas (director) was in my group. Puri Jagananth was looking for a new face and it was Bharat Thakur who got me into films.

How did you get into yoga?

I met Bharat Thakur at a meditation workshop. He trained me.

How has your journey been from yoga teacher to actor?

It has been amazing. I have done what my heart told me to do. I have become sensible over the years. After learning yoga, I wanted to teach it but my dad freaked out. It took some time for him to digest the news. I felt good when I took my first yoga class. Subsequently 45-50 year-olds would come and share their problems. It was a different world.

What's your philosophy on life?

Don't take the magic out of life.