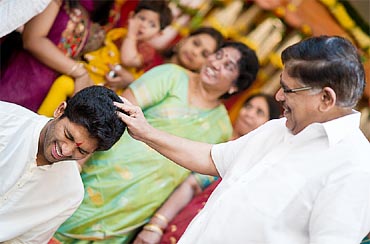 Telugu actor Allu Arjun's wedding on March 6 is going to be one of those grand affairs, attended by the who's who of Hyderabad, Secunderabad, and perhaps the country.

The Varudu (bridegroom) hero Arjun will become a bridegroom in real life when he gets married to Sneha Reddy (daughter of an educationist, who runs engineering colleges in Andhra Pradesh) on Sunday. 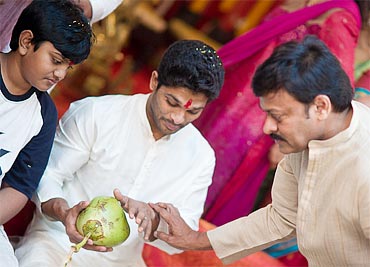 Image: At the Pelli Koduku ceremony: Chiranjeevi and Arjun

The wedding will take place at HITEX (Hyderabad International Trade Exposition Centre, a state-of-the-art venue for all kinds of events) and the muhurtam is fixed at 10.30 pm.

Preparations are on in full swing and one can expect nothing short of grandeur and extravaganza. 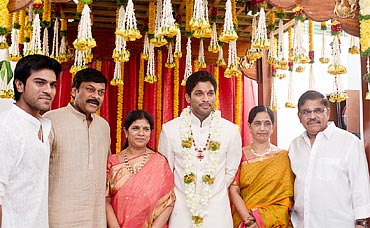 According to sources, invites have been sent to many the film stars in the South film industries, and Mumbai.

The guest list is likely to run into thousands considering the connections of the family (Arjun's father's sister is married to megastar-turned-politician Chiranjeevi).

Aamir Khan is expected at the wedding as his blockbuster Ghajini was produced by Allu Aravind, Arjun's father, under their Geetha Arts banner. 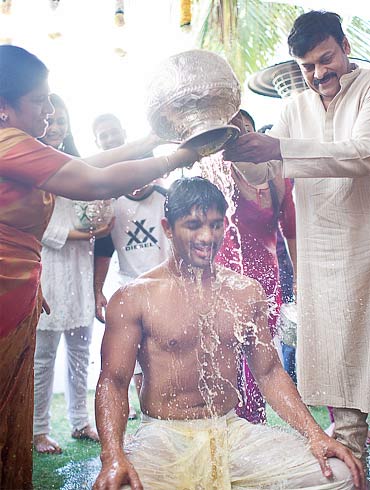 Image: Chiranjeevi and Surekha give Arjun the traditional bath

The ceremonies have begun.

The pelli koduku ceremony was held at Chiranjeevi's home on March 2, and sangeet the next day. Both were attended by family and close friends. 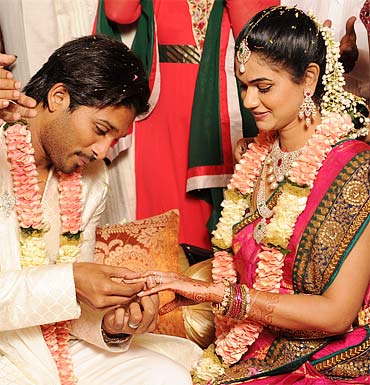 Image: The engagement (left) was held on November 26.

A reception for Arjun's fans will be held at Shilpakala Vedika on March 8.

A trip to Tirupati by the newlyweds to seek blessing of Lord Venkateshwara is also slated after the reception.
More
Write a
Comment
Print this
article