'Lady Gaga is dying to connect with India' 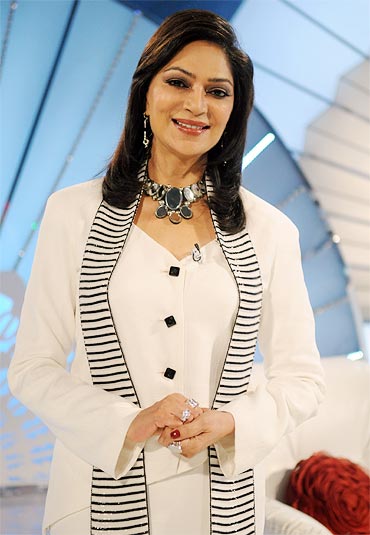 Simi Garewal's new chat show Simi Selects India's Most Desirable did not get rave reviews like her earlier show, Rendezvous with Simi Garewal. But Simi doesn't mind. She wants the show to be unlike other chat shows, and feels she's doing a great job at it.

In an e-mail interview, Simi tells Rajul Hegde about her show, and also her new guest Lady Gaga.

What kind of research do you do on a celebrity before the shoot?

In Rendezvous, I would research everything about the person, almost from the time they were born! I could write a thesis on them! I'd read up, talk to people, I'd do whatever it took to know about them because that show was very in-depth and comprehensive.

In SSIMD, it's simpler -- my focus is mostly on their 'desirability' factor.

I ask questions that the average single boy or girl, who dreams of meeting them (or even marrying them -- everyone can dream!) would like to know about them -- especially their views on love and relationships. How they deal with relationships and break ups and what they look for in mates. It's about India's Most Desirable -- for people who desire them and want to know more about them. You shot for an episode with Lady Gaga in Singapore for Simi Selects. Can you talk about your interaction?

Lady Gaga has been my favourite pop performer for the last two years, ever since she came on the music scene. I know all her music, so I was delighted when I got the opportunity of interviewing her.

She is a huge global phenomenon. She was amazingly warm and friendly. Very girlie! She noticed everything I wore and complimented me profusely.

I gifted her an Anamika Khanna lehnga -- she absolutely adored it and called her designers in to see the exquisite embroidery. The skirt was encrusted with pearls and embroidery and it weighed 10 kilos!

I also gave her a DVD of Bollywood dances by my friend Farah Khan. She was so excited and told her assistant 'give it to me tonight; I want to see this tonight.'

She was quite upset at media reports that she will not be doing a concert in India because she wants more money. She said it was entirely untrue. She is dying to connect with India, loves Indian food and knows she has hordes of fans in India. So she is coming to India in October, she said, not for a concert, as she has to shoot for her new video, but for a promotional tour.

Our interview covered her childhood, her music of course, her family, her transformation to Lady Gaga. All this will be in my documentary style show on Simi Selects India's Most Desirable -- Lady Gaga Special, so don't miss it!

I liked the fact that she had no airs. She wasn't the prima donna or diva I expected. As I said, she was very 'girlie-girlie' -- and when we talked of fashion, off-cameras, it was just like talking to one of my girlfriends!

She is not hesitant to praise another woman -- and that is so rare these days. It's wonderful to meet an icon who has made such a huge success of her life at the age of 25! And it's wonderful to see that despite of all the fame and adulation, she remains very human.

'The show is doing so well, so why change anything?' 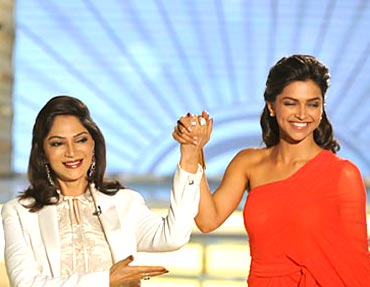 Rendezvous with Simi Garewal was quite popular but Simi Selects didn't get great reviews.

Rendezvous also got awful reviews when it started! So did It's a Woman's' World, my first magazine style chat show. And both of them became landmark shows! So what does that say?

I realise it's the nature of the media to criticise anything that's new or different. Maybe they prefer copies and clones of shows because they never criticise them.

No one in India tries something new or different. Every show on TV looks the same with a wee bit of tweaking. That's not how I want to do my shows. It has to be original. And let me emphasize here -- the viewers love Simi Selects. We are getting a terrific response. The TRPs are tops across English programme viewing. And that's what matters. So Star TV and I are both very happy.

The show is doing so well, so why change anything? Some people like the interview segments, some like the family segments, others enjoy the games -- so there's something in it for everybody.

'I don't believe controversies make or break a show' 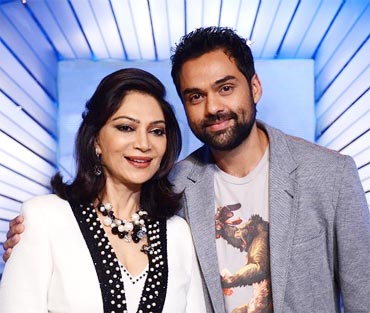 What differences do you find in the young stars of today and the ones you interviewed earlier for Rendezvous?

I interviewed many young stars in Rendezvous also; the difference here is that my guests are ALL young! They are the new generation. They don't have 'image' hang-ups or baggage. They speak freely and are very intelligent and smart and fun. Reading minds of any age is not difficult -- they are all human beings. They all have feelings.

Do you think some controversy during the show helps to create a buzz and increase TRPs?

I believe you create a genuinely loyal viewership and they wait for 9pm on Sunday to watch the show. I don't believe controversies make or break a show -- it's not a tabloid chat show.

What is the best compliment you have got after this show went on air?

I hate to be immodest but I've truly received amazing compliments from people everywhere and if I repeat all the nice things they've said it will look like bragging.

Last Sunday someone told me her TV wasn't working so she barged into her neighbour's flat (whom she hardly knows) just so she wouldn't miss the show.

'I don't go in for facials and beauty treatments' 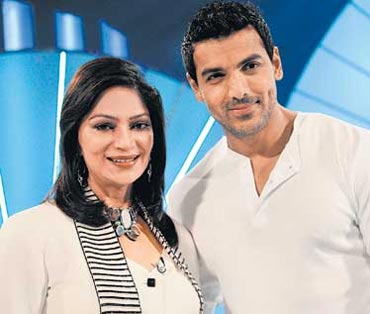 How difficult/easy is it to make the celebrities speak about their personal lives?

I have never found it difficult to talk to people about their personal lives. I respect their privacy and deal individually with the person in front of me. You have to make your assessments on the spot. I think they know that I am not trying to be gossipy or sensational; I am trying to understand their personalities.

You are mostly seen in white. Is there any other colour that you like apart from white?

I like ivory and cream -- but they are all extensions of white, aren't they?

You don't seem to age. Can you give us some tips on how to look young?

It's sweet of you to say that, thank you. I really don't do anything special which other women don't do. Except, I don't drink alcohol. I work out every day. I don't go in for facials and beauty treatments. I watch what I eat... you know, the usual.