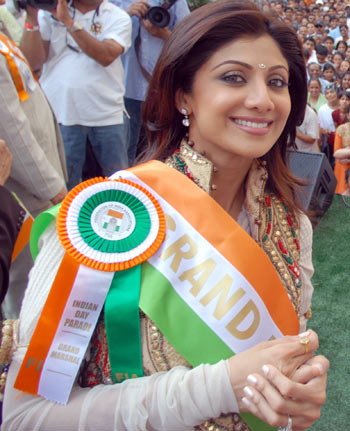 "I have been through this whole thing of racial discrimination," she said during a press conference organised by the Federation of Indian Associations held before the India Day Parade in New York on Sunday, where Shilpa was the grand marshal. "I think everyone has the right to live with dignity, and if something like that [SRK's detention] has happened, and if it is because of his race, it is unfortunate."

'It is unfortunate that it happened with someone like Shah Rukh' 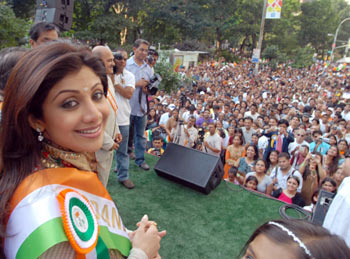 There are a lot of people who are inconvenienced by all this. But if you come to see how grave the situation was after the terrorist attacks, I think even Bombay has become a little overcautious," she added.

"But it is unfortunate when it happens to celebrities because then it is highlighted much more. But at the end of it all, I think people have to be treated with equality. It is unfortunate that it happened with someone like Shah Rukh," she said.

'It is an unfortunate procedure' 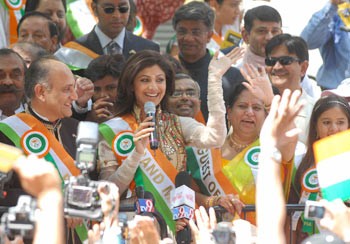 Khan himself did not want to make much fuss about the detention.

A day after the incident, he said that did not want an apology from the US government. 'I think it's procedure that needs to be followed, but an unfortunate procedure,' he was quoted as saying.

Prabhu Dayal, Consul General of India in New York, said that that consulate is taking up the issue with the US Immigration local director to find out what actually happened at the airport, and why SRK was detained.

'By the time we got to talk to Shah Rukh, he was already released' 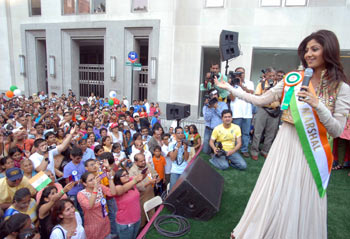 My consular officer for visa and passport, Mr Bajaj, was informed by New Delhi around noon that Mr Khan was detained at the airport and he immediately got in touch with him over phone. But by the time we got to talk to him, he was already released," Dayal told rediff.com

"When we called him, Mr Khan said that that the matter was over, that he has been released and that he was going to Atlantic City," he said. "After that conversation yesterday, we have had no contact (with SRK)."

Apparently, the consulate did not know that Khan was visiting the US and learnt of it only when the External Affairs Ministry called the consulate to say that Khan had been detained by the immigration officers.

"I don't think we will be able to get in touch with the US authorities before Monday," he said.