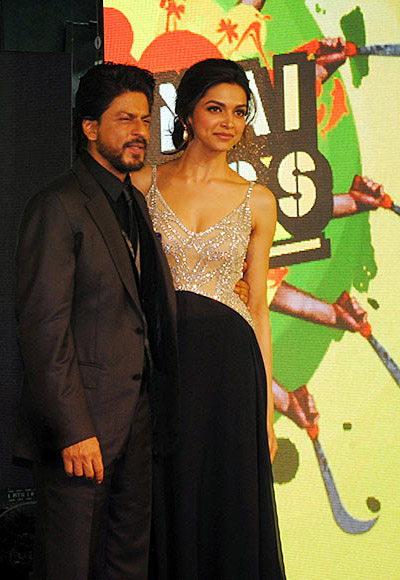 Shah Rukh Khan, who recently welcomed his third child -- a baby boy born through a surrogate -- may have been a little peeved with all the unwarranted attention his family got from the Bombay Municipal Corporation officials but the star was brimming with excitement at the music launch of his upcoming film Chennai Express at JW Marriott hotel in Juhu, a western Mumbai suburb.

However, when quizzed for details about the newest mumber of his family, SRK urged the media to respect his family's privacy and talk about the agenda at hand instead.

'It is extremely personal and confidential, it's also a mixed bag of bittersweet moments for me and my family at this point. I would request everyone, including the concerned authorities, to show the same alacrity they did for their enthusiastic investigation on my baby on things that really matter.’

'Having said that, when the sad part of it gets over, of course I will share everything with you. So, this is the last question, get on the (Chennai Express) train, we will talk about my baby some other time,' the actor said.

'Shah Rukh has been very protective of me' 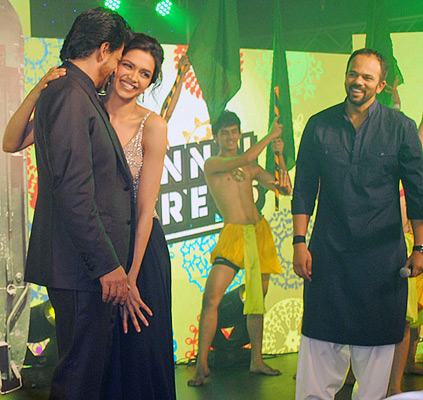 The music launch, however, turned out to be a very colourful event with a flambouyant dance performance by artists on the songs One two three four and the title track from the film.

Shah Rukh kicked off the interaction by singing his favourite song from the film -- Tera rastaa chhodoon na.

Deepika Padukone, who looked fetching in  her Naeem Khan Fall gown, said, ‘I felt liberated as an actor with Shah Rukh and Rohit around me’.

The actress, who's previously worked with Shah Rukh on her debut film Om Shanti Om, had some wonderful things to say about her costar too and described him as a caring and protective person.

Priyamani: It was lovely to work with Shah Rukh 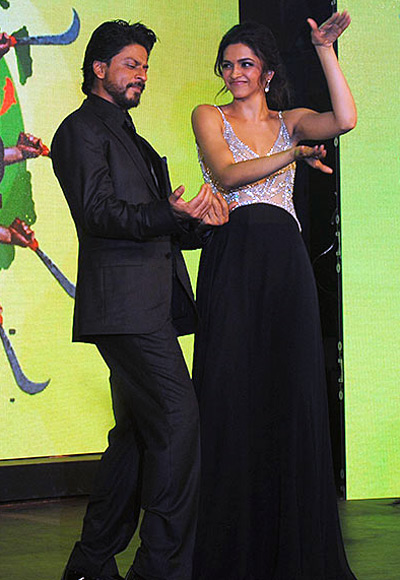 Interestingly, by her own admission, Deepika's most memorable scene in the film is the one where SRK throws a chappal (shoe) at her face.

Meanwhile, Shah Rukh recounted his struggle with his dance number -- One two three four -- featuring South actress actress Priyamani. Apparently, the actor had to go through numerous retakes to get the moves right.

‘Since Priyamani was working with me for the first time she was respectful and didn't get agitated when I apologised for all the extra rehearsal. She would dismiss it by saying that she likes to rehearse a lot. Poor girl came in to shoot for three days and ended up shooting for five days because of me,' SRK said.

To which, Priyamani responded, ‘He wasn’t bad at all, working with Shah Rukh Khan was a lovely experience’.

'My respect for women wearing skirts has increased' 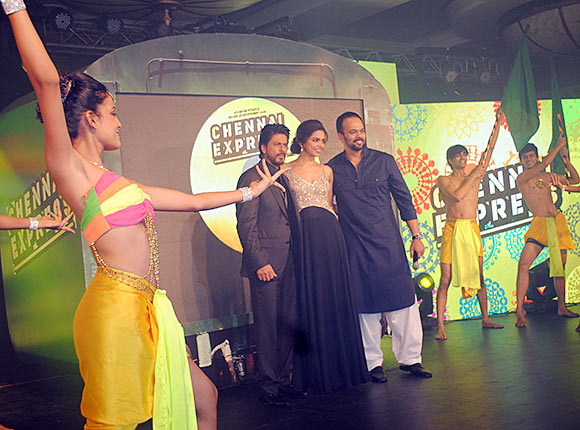 Shah Rukh Khan's ordeals, it seems, were only limited to the complex dance moves because the actor enjoyed donning the lungi (traditionally called veshti in Tamil Nadu) for the film.

'It is very airy and very convenient in a hot climate but I realised that people stared a lot each time I climbed up the stairs. My respect for women wearing skirts and men wearing lungi has increased,' he said.

The high profile night ended on a high note with an after party organised for, as SRK put it, 'the overworked mediapersons to let their hair down.' There was champagne and girls doing acrobatics on rings at the party.

The film is set to release this Eid on August 8.