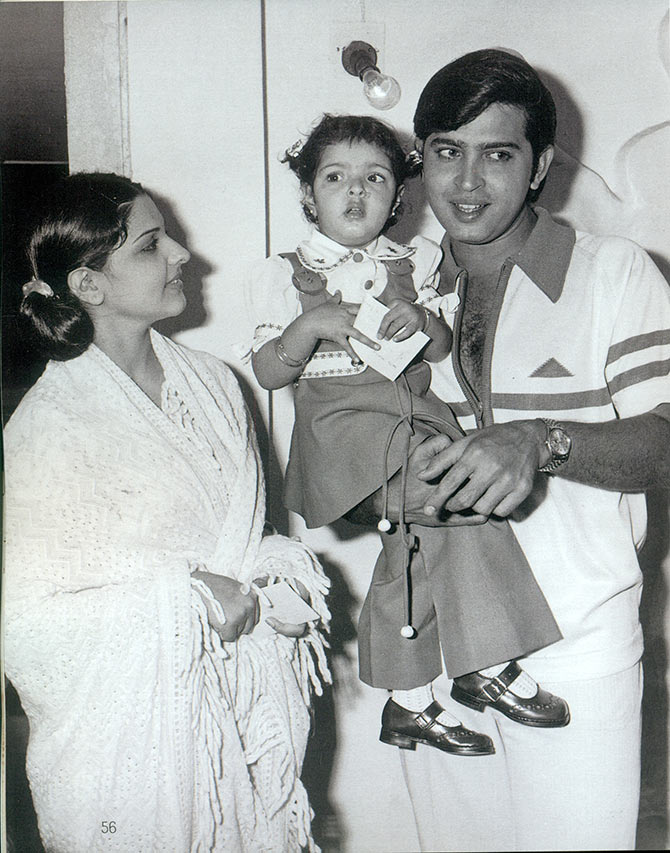 Rakesh Roshan's daughter Sunaina has penned a coffee table book on her famous father called To Dad, With Love, with lots of anecdotes and pictures from his life.

Besides the family itself, Sunaina has also spoken to film personalities who have worked closely with her dad.

We present excerpts from the book, in two parts.

In the first part, Shah Rukh Khan reveals some interesting details about how he bagged his first film with the Roshans, King Uncle, followed by Karan Arjun and Koyla.

We also present some beautiful and rare pictures of Rakesh Roshan with his family, friends and on the sets of his movies.

To this day, Shah Rukh Khan remembers how Dad met him at China Garden where we were having dinner and offered him King Uncle (1993) which started a long association that spanned three films as hero (King Uncle, Karan Arjun, Koyla), a sporting guest appearance (in Krazzy 4 which Filmkraft produced but Dad did not direct) and a deal for Khan's Red Chillies to take care of the spectacular SFX of Krrish 3.

SRK recalls their first meeting, "I was leaving the restaurant when Rakeshji took me aside and said he wanted to cast me in a film with Mr Bachchan who, incidentally, was also at the same restaurant.

Rakeshji made me the offer and said, ‘If you don't want to do the film, you tell my family because they liked you a lot in Fauji.’

I said, ‘Yes, of course,’ and he added that if I changed my mind for any reason I would have to face his family.

As far as he was concerned he'd done his job by asking me to do his film. That was very sweet of him."

Ultimately, King Uncle was not made with Amitabh Bachchan but with Jackie Shroff though Shah Rukh Khan remained an integral part of it.

Excerpted from the book To Dad, With Love by Sunaina Roshan, published by Om Books International, with the publisher's permission, Rs 1,995.

'I loved the biscuits that they made at home' 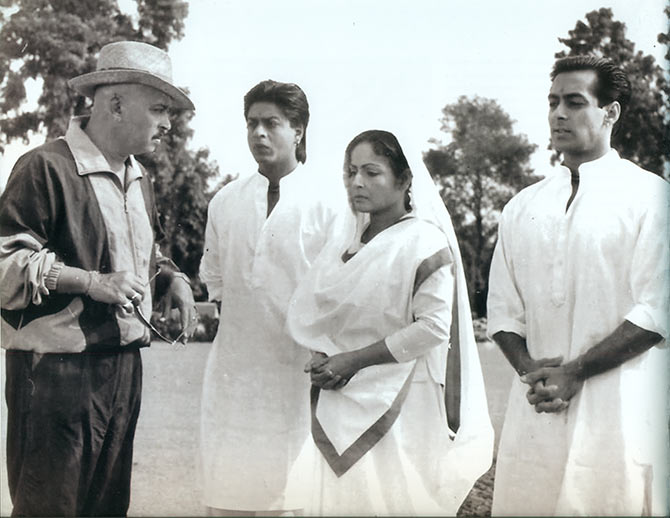 SRK remembers the slightest details about his early visits to our house.

“I loved the biscuits that they made at home. I was initially overwhelmed by Rakeshji's pristine look and light eyes but seeing him in his house with the whole family made me feel really wanted and loved.”

King Khan humbly recalls that it was King Uncle which took him out of the country for the first time.

“I got the opportunity to travel abroad when we went to South Africa to shoot a song,” he puts on record. “In fact, the first song that I ever filmed was ‘Is Jahan Ke Nahin’ for King Uncle." 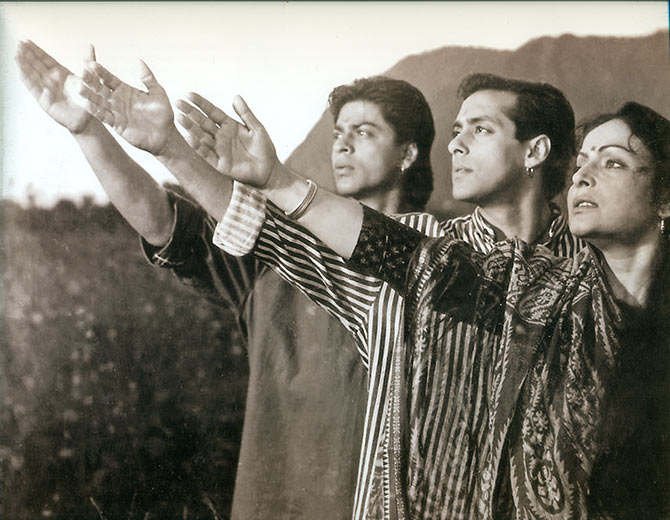 Dad was shooting in Nairobi with Anil Kapoor and the cast of Khel when he asked Shah Rukh and Nagma to fly down to picturise a song on them.

Shah Rukh associates that trip with many warm memories. “In the evenings, Rakeshji used to take me out for dinner with the rest of the team and all of them were very kind to me.

I think Sunaina and Duggu were given the job of looking after me. I also remember that when I didn’t have a jacket, Anil or Rakeshji would lend me theirs because you couldn't enter the restaurant without one. Their jackets were a little big for me,” he dimples at the memory. 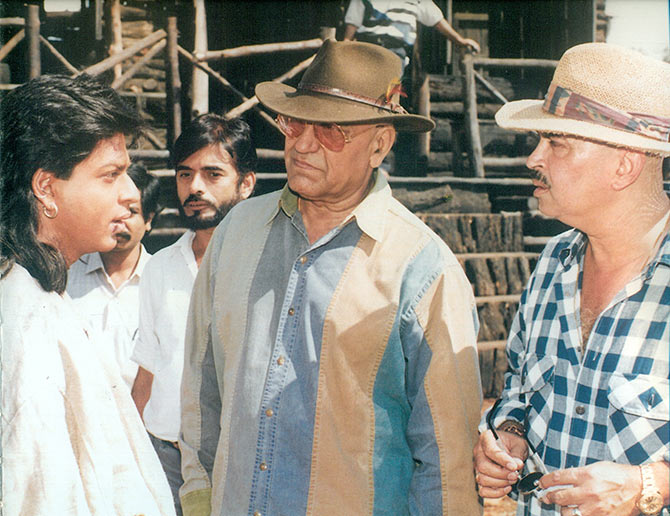 SRK maintains that Dad initiated him into this fascinating world of cinema and he learnt much from him. He even picked up terms like ‘hit film’ from Dad.

“Rakeshji was the first man to tell me that my film (Deewana, 1992) was a hit,” he smiles wryly at his early naivete. “I was shooting for King Uncle at Mehboob Studio when he came in and said, ‘Arre yaar, teri film bahut badi hit ho gayi hai (hey buddy, your film is a massive hit),’ Until then I didn't even know what a hit film was."

Since Dad was one of the best horse riders in the film business, SRK also learnt to ride a horse from him during Karan Arjun. "I'm still not good at it,” admits the frank Mr Khan who also states that his career's first "item number" was 'Jaati Hoon Main' in Karan Arjun (1995).

“It was my first action film too,” he states for the record.

'I picked up a lot of sophistication from Mr Rakesh Roshan' 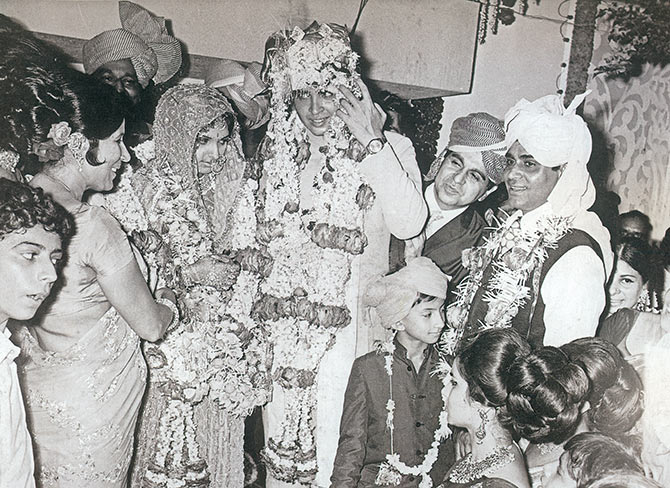 SRK even credits Dad with introducing him to a more sophisticated style of living.

"During King Uncle which was my first large scale commercial film, we were in a five-star hotel in Goa where I used to enjoy sitting in my room and playing video games while everyone else would be out having dinner.

So he used to say, ‘Tu Kamre mein jaake kya karta rehta hai? Video games khelta rehta hai’ (What do you keep doing in that room? Play video games?).’ Then he would force me to go out with them for dinner. I learnt a lot from him. I didn’t understand the relevance of good food, sitting in a dining room and eating. I picked up a lot of sophistication from Mr Rakesh Roshan.”

'I still haven't learnt to be on time' 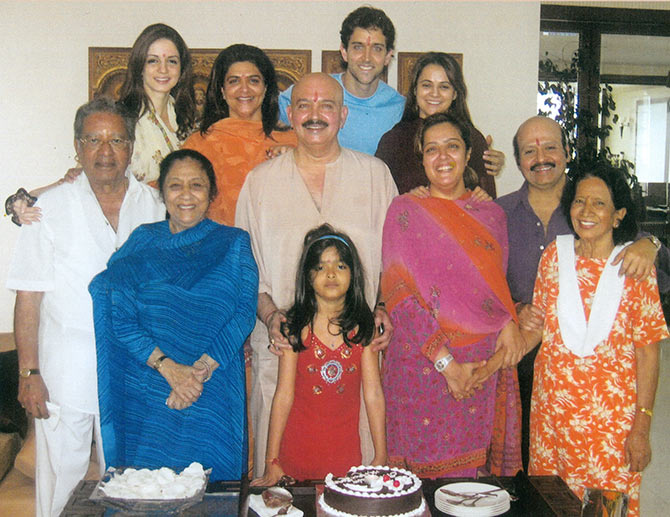 One quality he didn’t pick up from Dad was punctuality.

He unabashedly admits, “I still haven’t learnt to be on time. He is precise to the second and you can wind your watch according to him.

I could never wake up early, so he used to depute a few guys to make sure I was up on time.

Or he would threaten to personally come and wake me up. For me, one of the scariest thoughts was to be woken up early in the morning because at that time I used to sleep in the raw."

'I used to fool Rakesh Roshan a lot' 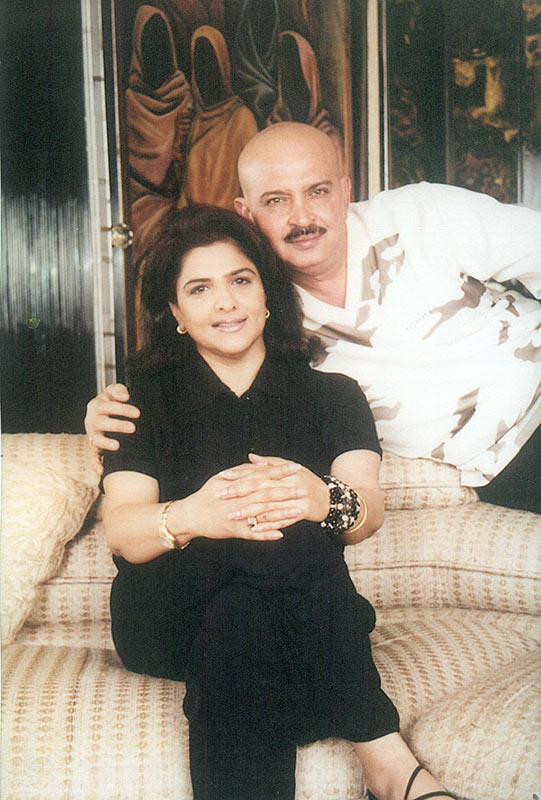 "The first thing Rakeshji would wear was his hat. He is one of those people who look daisy-fresh after a bath. He looks like he's been dry-cleaned, his face glows like he's been scrubbed. I didn't really want to get up but when you see a fresh face in the morning, standing with big guys by his side, saying, ‘Chalo utho’ (come on, get up), I would say, ‘Haan, uth gaya’ (I'm awake).

I would get up and sit up. I soon realised that if I sat up, he thought I had woken up and would go out to call for tea. The moment he went out, I would go back to sleep. I used to fool him a lot like that. Or I would make up stories that I had woken up but the car broke down.

I really gave him grief during Karan Arjun and Koyla by turning up late. But I think he liked the fact that I worked hard and would do anything I was asked to as an actor." 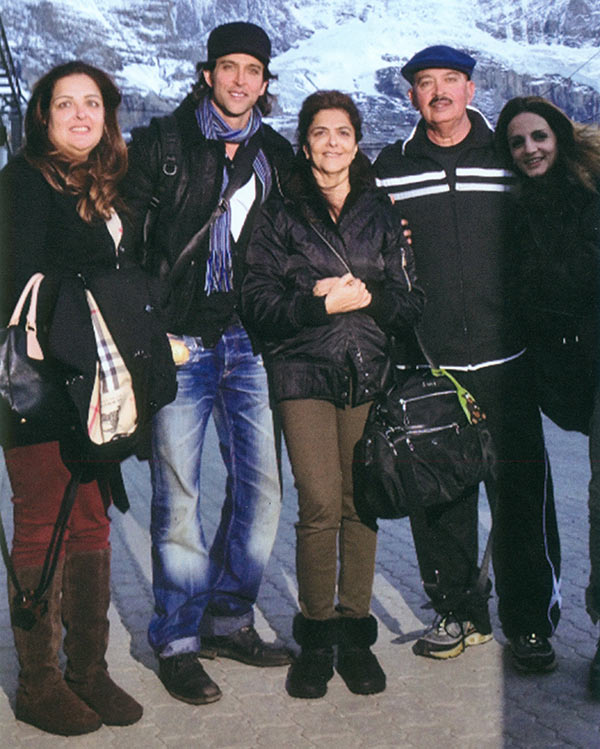 Shah Rukh soon became comfortable enough to explain to Dad that he really was uncomfortable with reporting for work at 9 am and to please allow him to come late.

One day, Dad told him that he could turn up late the next morning. The first happy thought that rushed through SRK's mind was that his persistence had paid off and he could stroll in an hour or so later than usual.

He was still enjoying that thought when Dad told him that instead of 9 am, he could come at 9.15.

That's how much leeway he was willing to give SRK!