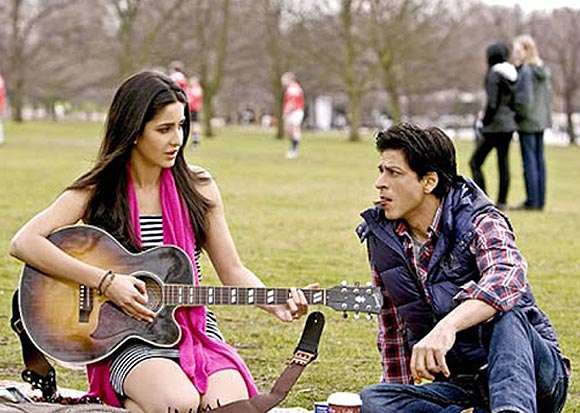 Actor Shah Rukh Khan, who is currently shooting in Kashmir for Yash Chopra's yet untitled film, got nostalgic as his father always wanted him to visit the valley.
'My fathers one unfulfilled wish was to bring me to Kashmir cos his mom was from here. Now i am here, it feels i am in his big strong arms,' he tweeted.
The film will get a name on Yash Chopra's 80th birthday on September 27 and is expected to release this Diwali.
Tags: Shah Rukh Khan , Yash Chopra , Kashmir , Diwali , Bollywood

Image: Disco Deewana from Student of The Year

Filmmaker Karan Johar has revived the magic of the classic hit Disco Deewana. Karan has tailored the track, recreated by Vishal-Shekhar and sung by Sunidhi Chauhan.
Karan shared the teaser of the song on Twitter.
Meanwhile, Mini Mathur already likes the remix of Nazia Hassan song. 'Karan .. It's a sure fire winner. Love the fact that nazia - zohebs voice is still on it ...looks like fun :))' she wrote.
The song will be premiered today across 16 music channels, FM radio and several online platforms.
Tags: Karan Johar , Disco Deewana , Mini Mathur , Sunidhi Chauhan , WATCH 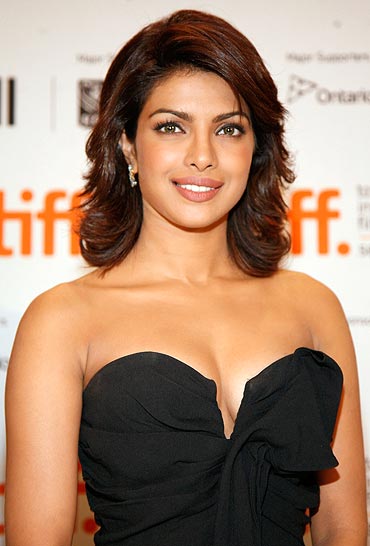 Image: Priyanka Chopra
Photographs: Malcolm Taylor/Getty Images
After finishing the work on her debut album, Priyanka Chopra is in London to promote her upcoming film Barfi!.
'London bound! So excited about promoting Barfi.. The film and my single comes the same time And such different vibes to both! Very grateful!' she tweeted.
She is also making her debut as a singer with In My City, featuring Will.i.am. The song will be launched on September 13 as part of Thursday Night Kickoff, a pre-game show for NFL Network's Thursday Night Football.
Barfi! releases on September 14.
Tags: Priyanka Chopra , NFL Network , London , Barfi

Saiyaan, the latest song from Heroine is getting a good response. Sung by Rahat Fateh Ali Khan, the sufi number features Kareena Kapoor, Arjun Rampal and Randeep Hooda.
Director Madhur Bhandarkar shared the song and thanked everyone: 'Thank you for your overwhelming support! Saaiyaan from #Heroine gets 1 million views in 3 days,'
Heroine releases on September 21.

Abhishek Bachchan: Dhoom changed everything for me 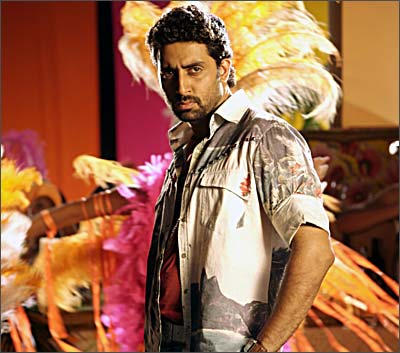 Abhishek Bachchan, who is currently shooting for Dhoom 3 in Chicago, got nostalgic. The actor remembered the first part on its 8th anniversary and tweeted: '27th August 2004. A milestone in my movie career. Dhoom released on this day, and changed everything for me. And 8yrs later... On the same day, I shoot for Dhoom 3! Time flies when you're having fun. Thank you all for always being there through it all.'
Meanwhile, director Subhash Ghai is excited about his next film with Salman Khan.

'A YOUNG top director told me to cm bk to my style as he grownup watching my movies as khalnayak.i smiled. I am BACK with sleeveup already ! yes i was away focusing on whistlingwoods school for a decade BUT now I m back to spicy hot film making with a terrific script in my hand,' he tweeted.
Tags: Dhoom , Abhishek Bachchan , Subhash Ghai , BACK , BUT
More