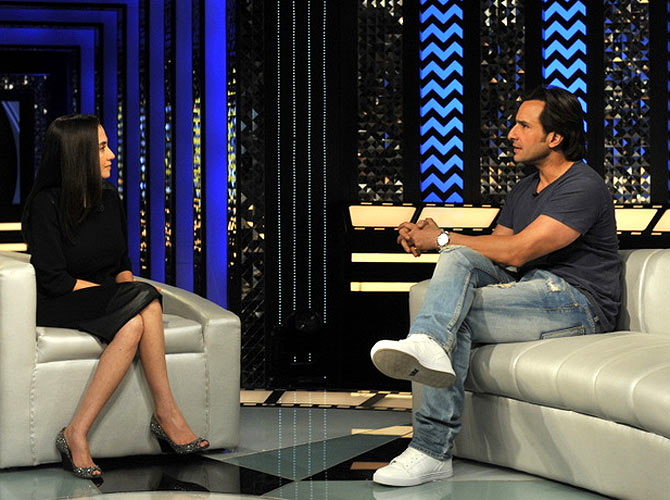 The actor-director, who are currently promoting their new film Bulett Raja, had an interesting chat, where Saif insisted he wasn't angrez!

We present excerpts from the show:

Anupama: Tigmanshu, what was Saif like with the character of Raja Mishra in Bullett Raja? Personally, Saif comes across as very westernised, extremely 'angrez’. So how do you break that?

Tigmanshu: It wasn’t difficult. We had discussed everything before we went to the sets.

Saif: Yaar, I’m not angrez. I have this image of being angrez because I went to an angrez school but I’m sure there’s a class or a section of Eastern people who are exposed to the West. I mean, they’re not dehaats but they’re not Western also. I am rooted. I like to eat with my hands, I like to sit cross-legged. I pray on a janamaz. So I think I’m a little bit like my father in that sense. He liked the tabla and the harmonium, he wasn’t English. But nobody’s Raja Mishra, yaar (smiles). I mean there are a few people, but not around here
Tigmanshu Dhulia: (laughs) Exactly.
Click Next to read more.

'The late Yashji (Chopra) used to stammer a tiny bit' 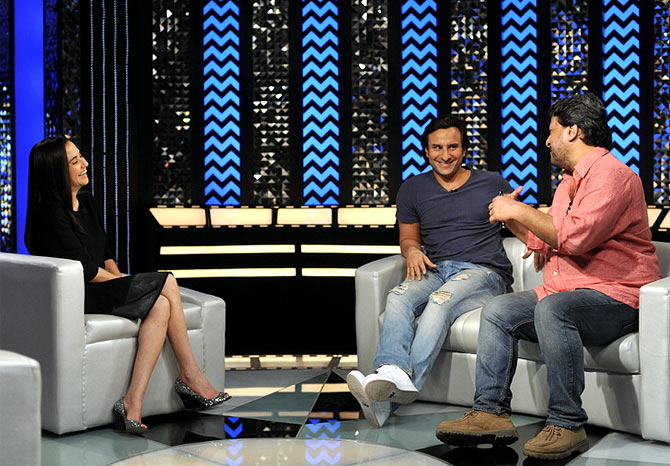 Anupama: Saif, what’s it like to work with a director who also acts and acts as well as Tigmanshu Dhulia?

Saif: Well, it’s much easier because you are trying to do something that you haven’t done before, it’s all new for you, I think all directors should know how to act a little bit. Some directors, I’ve had the privilege of working with, are not such great actors.

Saif: I’ve had the pleasure of working with him (smiles).

Anupama: If you've seen him in the scene from Jaane Bhi Do Yaaro (laughs)...

Saif: But even the late Yashji (Chopra) used to sometimes stammer a tiny bit. And he said a line to me once. He said, “You just come in and you say 'P-p-pratap has landed'”. So I came in my first take and said (stammering), “P-p-pratap has landed.” Everyone started laughing. I said, “Why are they all laughing?”. Everybody said "Idiot! What are you doing?"

Anupama: Did you really do that?

Saif: Yes, it was my first shot ever in movies. That’s what happened.

Anupama: In your debut film Parampara?

Saif: Yes. I had to say, 'Pratap has landed'. But it’s nice if you get an idea of what to do because all actors would like a fresh take. There’s a way that we would have done it but if somebody shows you, then your way of modulating lines, saying something is different and it gives us something to work with.