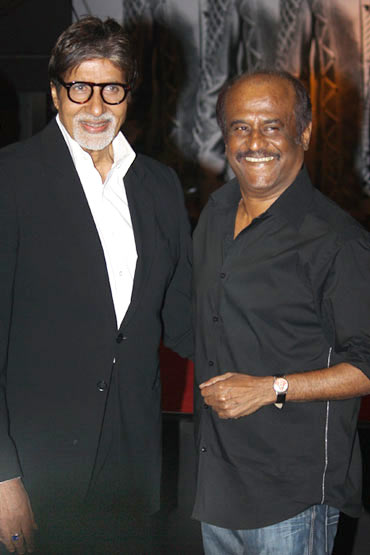 Saturday evening saw the audio release of Tamil film director Shankar's Robot (Endhiran in Tamil), starring superstar Rajnikanth and Aishwarya Rai Bachchan. Present on the occasion were a galaxy of celebrities, including the Bachchan family, two Oscar winners in A R Rahman and Resul Pookkutty, and others. Krishnakumar Padmanabhan recalls the event

The Tamil movie industry is on the cusp of change.

Earlier, viewers had knowledge of upcoming releases only through massive posters in vantage points in Chennai and other major cities.

Then, makers of event movies -- starring Rajnikanth or Kamal Hassan -- began coming on satellite television trumpeting the virtues of their films.

Of late, with almost every other movie being produced or distributed by production houses belonging to the extended Karunanidhi family, who also have a virtual monopoly in the cable television space, most of these movies come with the now-standard 360-degree promotion.

Director Shankar's Endhiran (Robot in Hindi and Telugu) is by far the most-expensive Indian film ever produced, and thus, the stars and technicians could not escape the publicity rigmarole.

But at a time when Bollywood stars text Union ministers alleging humiliation at the hands of Western airport security, stage their disappearance and concoct link-ups on the eve of their release, the Endhiran launch was a shining example of how the southern industry has stayed away from cheap publicity stunts -- at least so far.

Rajnikanth shoots from the lip 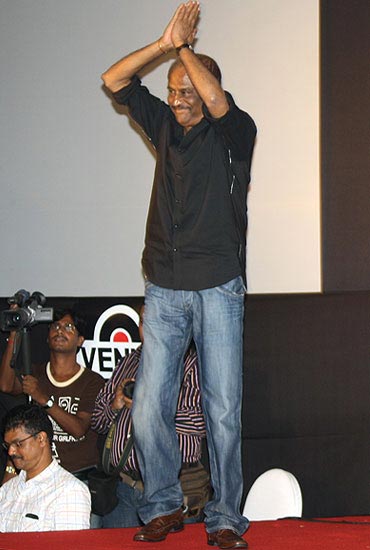 So we had director Shankar revealing more plot in one evening than Bollywood does during the full publicity period, the hero poking fun at himself, and the ace music director A R Rahman speaking more to those flanking him on the stage than from the dais.

Even Rajnikanth seemed taken aback by the entire publicity drill, and being the straight-talker he is, said as much during the audio launch of Robot in Mumbai on Saturday night.

"Kalanidhi (Maran, the movie's producer), please don't mistake me, but I have to say this," he said. "I don't know what to say. There was a major audio launch for Endhiran in Malaysia, then there was a launch in Andhra [Pradesh], and now here we are in Mumbai.

"We have been talking on and on about the film, but we have offered you little else. It is like we have made a dish. We have to present it to you to taste it. But before that, we are going on and on about how we made this dish, what all we have put into it. We are not showing the film, we are just talking and talking. When I think about this, it is very funny actually."

'Amitabhji is my inspiration, guru and role model' 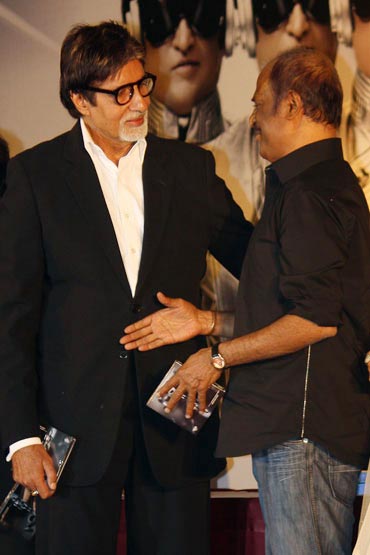 Earlier, Rajnikanth began his speech with warm words for his friend and fellow superstar Amitabh Bachchan, who later released the audio.

"Amitabhji is my inspiration, guru and role model. Whenever I have had a difficult decision to make, I have turned to Amitabhji," he said.

Rajnikanth also mentioned a private moment between them which those present couldn't figure out, something which he is known to do. "Amitji, I will never forget the 45 minutes we spoke in Lonavla. I am forever thankful to you," he said with glazed eyes. 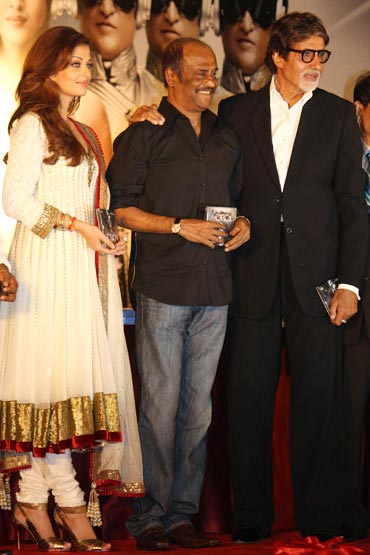 What were those 45 minutes about? Was it career guidance, or something bigger that Bachchan offered Rajnikanth? No one will know.

Other people he has spoken of in similar manner include his friend and industry rival Kamal Haasan, Mohan Babu and Rajkumar, Telugu and Kannada cinema titans respectively and personal friends.

In typical style, Rajnikanth thanked someone who he respects immensely in public without revealing what he was talking about.

Rajnikanth not the first choice 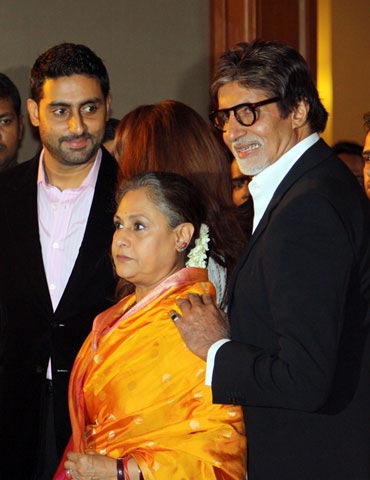 Robot is Rajnikanth's second consecutive film with Shankar, with whom he did his previous blockbuster Sivaji.

Seldom does Rajni repeat his team in consecutive movies, and he wasn't the first choice for Endhiran.

The idea has been in Shankar's mind for a while and popular Tamil writer Sujatha, who wrote the Tamil science fiction masterpieces En Iniya Enthira, collaborated with the director and finished the script and dialogue before his demise.

When Rajnikanth almost turned down Robot 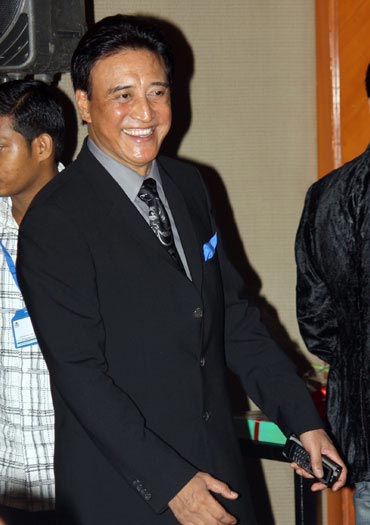 Shankar's first choice for the film was Kamal Hassan, with whom he had done Indian/Hindustani, but it did not work out. Bollywood badshah Shah Rukh Khan was then supposed to do the movie, but that too fell through.

"Had I not worked with Shankar in Sivaji and not seen him up close, I would not have taken up this role. It is such a challenging role. But after Sivaji I had the confidence that Shankar would get it out of me. Thank you, Shankar, for offering me such a legendary role." 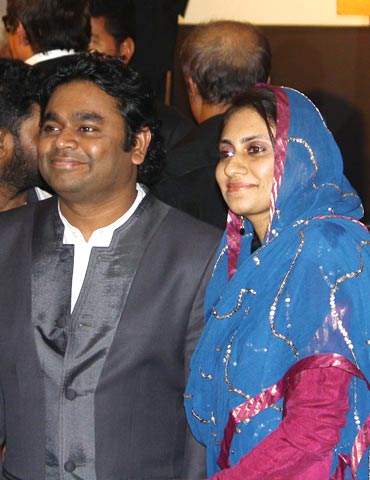 Of A R Rahman, Rajnikanth simply said, "What can I say, he is god's good child."

'Thank you, Aishwarya, for starring opposite me' 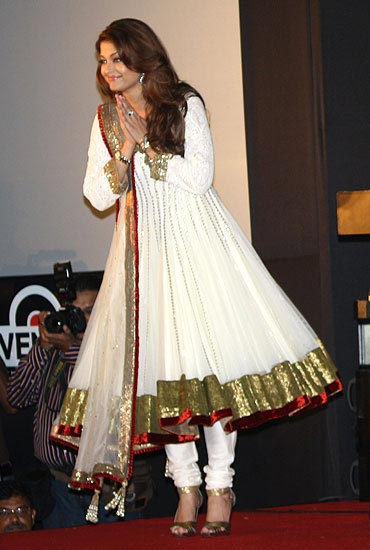 In his thank you roll call, Rajnikanth paused when he came to Aishwarya Rai Bachchan.

"Thank you, Aishwarya, for agreeing to star opposite me," he said, getting the crowd warmed up. He then narrated an incident that happened in Bengaluru.

"I was in my brother's house in Bengaluru. A new tenant -- a Rajasthani Marwari named Natu Lal -- had moved into the neighbouring house. One day he asked me, What Rajni all your hair has fallen, so are you enjoying retired life now?

"I said I am not retired yet and that I was working in a movie called Robot, in which Aishwarya Rai is the heroine. He nodded and asked, 'Hero kaun?' When I said I was the hero, he wouldn't believe it. He was speechless for 10 minutes. Then when his children convinced him that I was indeed the hero and that I am a star, he went away shaking his head. I could hear him saying, 'What has happened to Aishwarya? At least shouldn't Abhishek and Amitabh not have drilled some sense into her'," Rajnikanth said. 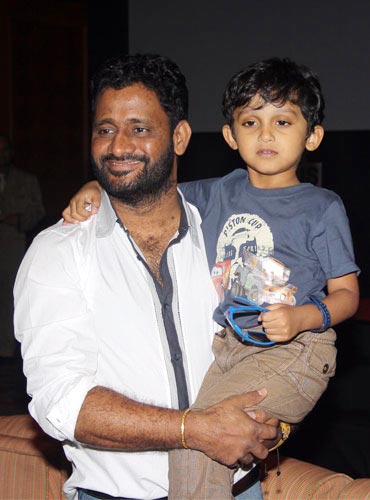 Earlier, director Shankar said he would be happy if the people saw the film not as a Hindi, Tamil or Telugu movie but as an Indian movie.

Rajnikanth said people should not judge the movie by its Rs 150 crore budget or its star cast.

"That historic film [Sholay] became a hit not only because of Salim-Javed and Ramesh Sippy, but also for those legendary characters -- Gabbar, Viru, Jai, and Basanti. Similarly, we hope you will all like Robot for its earthly characters," he said.

When Aishwarya dove for cover 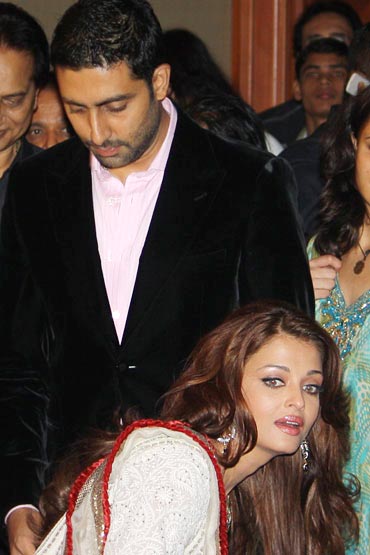 Shankar said the robot has acquired all skills known to man, including martial arts and languages.

"But he has not learnt man's lies, jealousy, and betrayal. If you are good to him, he would reciprocate, if you are bad he will do bad things to you, and that is the movie's one-liner," he said.

"Not only is she a great beauty, she is a great actor and a perfectionist. But the only problem with that is, not only does she do her part perfectly, she expects all others around her to also be perfect," he said, as Aishwarya, who was chatting with Rahman till then, dove under the table for cover.

'Working with Rajni was awesome' 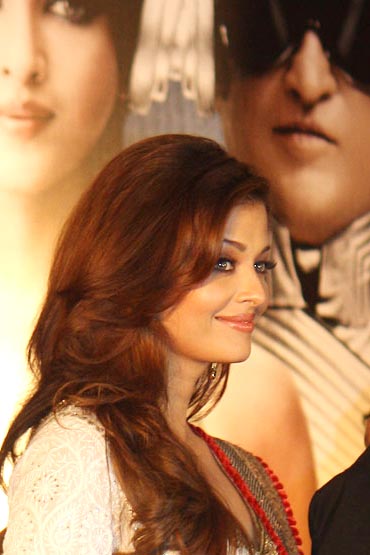 When it was her turn to speak, Aishwarya said: "I am expected to give a speech and I don't even have one prepared. So much for perfectionism."

She spoke of how Shankar's movies -- she had done the Tamil film Jeans with him early on in her career -- are technically always ahead of their times, and how great it was to work with the ace director and Rajnikanth.

"There was a scene where Rajni sir does one of his signature flicks and my back was facing the camera. I said I don't care if this shot goes for a second take, but I am not missing this for anything. It was an awesome moment," she said.

King of Tamil films is also king of humility 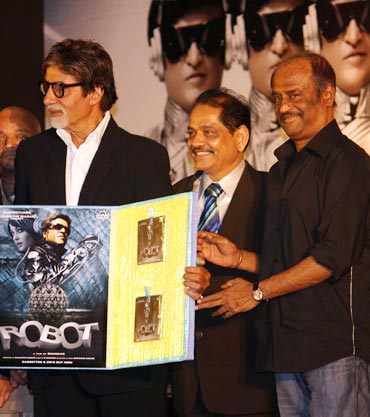 "I have long been associated with Rajni and value him as a friend and colleague. He is admired and loved by Indians all over. The biggest thing about him is how grounded he has remained despite all the adulation," he said.