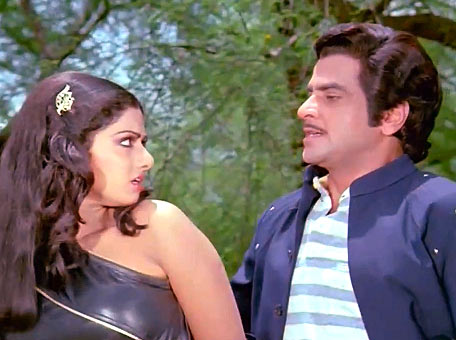 Bollywood displayed a strong case of multiple personality disorder in 1983.

On one hand, it bragged of remarkable cinema like Ardh Satya, Katha, Masoom, Mandi and Kisi Se Na Kehna while the other unleashed masala potboilers like Mawaali, Himmatwala, Justice Chowdhary, Pukar and Coolie with equal gusto.

If the quietly recuperating Amitabh Bachchan (after the near-fatal accident on the sets of Coolie) delivered his mandatory giant hit, Rajesh Khanna re-emerged with the generous response to Avtaar, Souten and Agar Tum Na Hote.

Meanwhile, Dharmendra tickled the audience with his garrulous antics in Naukar Biwi Ka while son Sunny Deol made his debut in the scenic love story, Betaab.

Other new kids on the block -- Jackie Shroff and Anil Kapoor, too, pulled all stops to get noticed in Hero and Woh Saat Din even as short-lived superstar Kumar Gaurav's decline continued with flops like Romance and Lovers.

It was 'Jumping Jack' Jeetendra, however, who ruled the roost with back-to-back hits in Hindi remakes of successful Telugu films.

Ditto for Sridevi, his co-star for most films that year (and to follow), made an impressive transition from South to Mumbai with an enviable mix of box-office winners and a critically-acclaimed performance in Sadma.

The Jeetu-Sri combo struck gold in a series of entertainers but it all began with K Raghavendra Rao's Himmatwala -- the highest grosser of 1983.

So if you haven't seen the original, here's what you, er, missed. 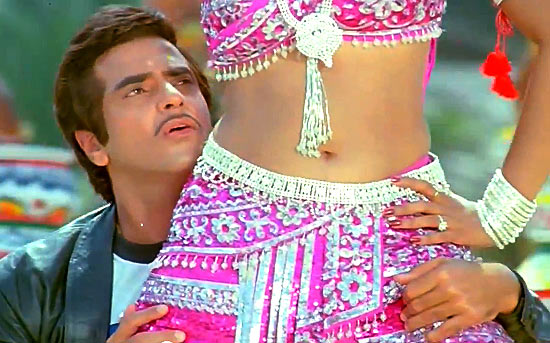 With Telugu filmmaker Rao's Himmatwala, also a remake of his own Ooriki Monagadu, Jeetendra willingly shed his image as a catalyst in weepy social dramas (Judaai, Aasha, Ek Hi Bhool) hero image and swung back into action.

Wearing his trademark white pants and shoes in several scenes, of course.

In addition, Jeetendra sports a strange wig (the kind Arun Govil wore to portray Lord Rama in Ramanand Sagar's mythological TV series) throughout the film. Govil also has a small role in the film but, luckily, he gets to keep his natural hair.

Sridevi, only 19 then, looks rather mature for a teenager and makes a convincing pair with a 40-year-old Jeetendra.

It's noteworthy how well-preserved his vigour is compared to most actors today who begin to resemble a crumpled paper by the time they hit 40s. (No wonder he endorsed the energising capsule, 30 Plus at one point.)

Also on board is Waheeda Rehman, as Jeetu's mother.

Incidentally, she played his wife (and later mom) three years earlier in the forgettable Jyoti Bane Jwala alongside a cast he'd collaborate with on most of his subsequent hits -- Amjad Khan, Kader Khan, Shakti Kapoor, Asrani.

There's also Swaroop Sampat (as his sister) and Shoma Anand (as Govil's love interest). While Sampat's significant other, Paresh Rawal steps in Kader Khan's shoes for the 2013 remake, Anand made her name for herself as the vacuous mom of five girls in Jeetendra's home production (run by daughter Ekta Kapoor) Hum Paanch. 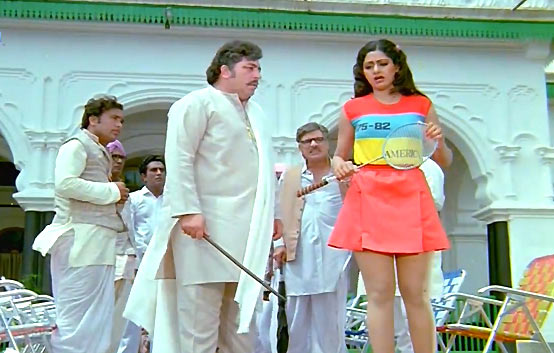 The plot with its blend of relentless twists and abundant cliches is nothing to write home about.

Here's the deal: Jeetendra's Ravi returns to his native, Ramnagar as an engineer in charge of a dam construction project, to discover his mother (Rehman) and sister (Sampat) in dire condition and tattered clothes.

A flashback reveals a semi-Agneepath situation wherein his school master father (Satyen Kappu, who else?) is falsely accused of taking advantage of a village woman forcing him to abscond his family and leave in disgrace.

A seething Ravi vows to avenge his father's lost honour and regain confidence among the terrorised villagers from the chief source of evil -- the arrogant zamindar Sher Singh Bandookwala (Amjad Khan trying to match his gaze with a stuffed tiger prop, which has been replaced by a live-action one in the remake) and his crooked ally, Munimji (an expectedly voluble Kader Khan).

Needless to say, our bungling bad guy Bandookwala has a spoilt, bratty, growling daughter (Sridevi) just two arm twists away from turning into a picture of humility.

In classic Bollywood tradition, the unpleasant Sri dons TIGHT-fitting leather pants, body suits, three-fourths, swimwear but the minute she transforms into girl-next-door, it's only saris and salwar kameez.

Though the English Vinglish beauty boasts of a famously svelte figure today, this was not the case with her early films.

Back then, she earned the unflattering tag of 'thunder thighs,' an attribute that is amply highlighted in a camera chiefly obsessed with her derriere.

Ingredients for a hit masala 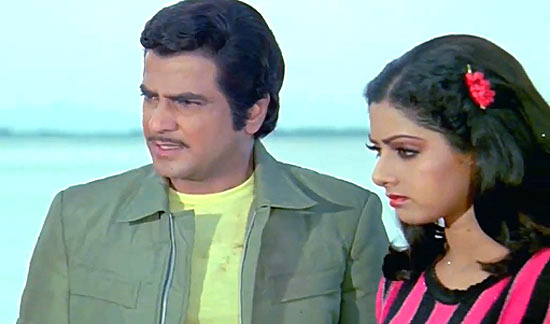 Himmatwala doesn't concern itself with performances or making much sense -- doling out implausible and absurd developments at every opportunity.

As long as the prime ingredients of romance, comedy, action, melodrama are active, Rao disregards the need to bind them together with some spunk or significance.

In an almost hilarious turn of events, two secondary characters lose their lives and their fast-forwarded funeral indicates the director's urgency to tick tragedy off 'Emotions you'll find in Himmatwala' list. 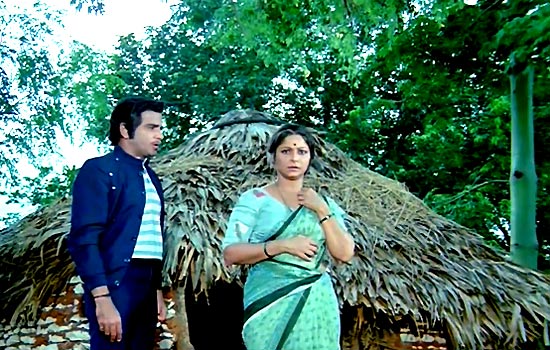 Next target is Rehman when she's taunted for projecting herself as a married woman while her husband could be presumably dead.

Cut to a quick hat-tip to Manmohan Desai -- the unprecedented master of lost-and-found genre when we discover her husband hasn't quite departed yet. (Oh yes, Himmatwala is one loaded offering.) 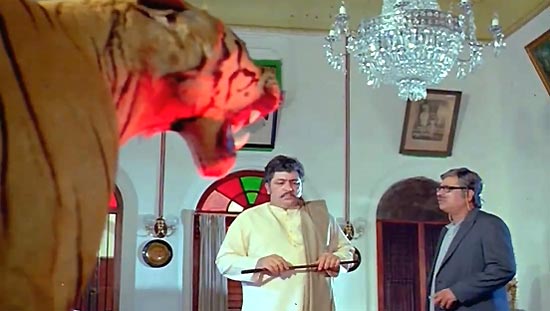 Jeetendra's distracting fashion (in one scene he's wearing a vest on top of a dungaree) and overacting or Sridevi's terribly dubbed delivery may or may not catch your fancy but Kader Khan's distinctly campy dialogues are in another league altogether.

Sample these and titter: 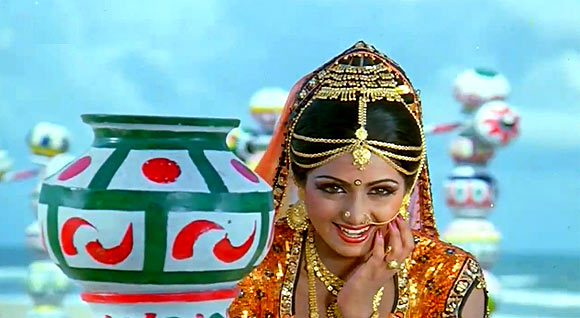 Bappi Lahiri's soundtrack is nothing exceptional but his ornate arrangement combined with Lata Mangeshkar and Kishore Kumar's vibrant rendition lend the matka-filled, multi-coloured frames of Naino mein sapna an infectious energy, which is attractive despite the excesses.

Also the free-flowing Jeetu-Sri chemistry is definitely at work in making it all click.

Besides Naino mein, which went on to become epic in Bollywood imagery, the other chartbuster Taki Taki is pure mumbo jumbo.

And in another Kishore Kumar goes ballistic with a frantic chant of Aa aa ooh aa ae ae. Who knew this would go on to become Tusshar Kapoor's lingo in the Golmaal franchise? 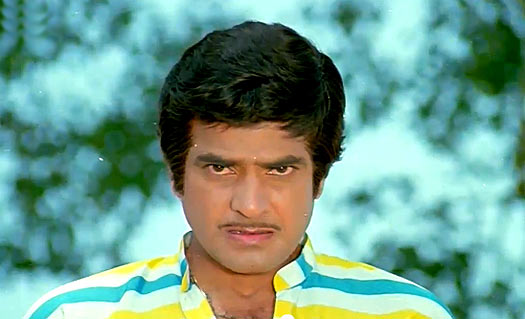 The dances are far too acrobatic for my liking but Himmatwala does score with stunt director (and Ajay's father) Veeru Devgan's dynamic action sequences.

The fight amidst banyan plantations is deftly executed.

And even the elaborate piece wherein Jeetendra single-handedly takes on more than half a dozen goons in a slickly choreographed bamboo fight with the easy of a martial artist -- leaping, tossing, somersaulting, the works is more Jackie Chan than Jumping Jack.

But it's all very amusing.

Himmatwala is not the kind of film that aspires for any history except box-office. To its credit, it neither pretends to otherwise.

Guess its ethics and aesthetics resonated with filmmaker Sajid Khan better than anyone else.

A huge fan of the 1983 hit, which is certainly not a classic, Khan is ready with Devgn in and as Himmatwala.

Can he pull off a Jeetendra? Could South sensation Tamannaah go on to become the next Sridevi?

To that, I'll respond with a title from another film that came out in 1983 -- Jaane Bhi Do Yaaron.