The Most Ambitious Project of Aamir's Career 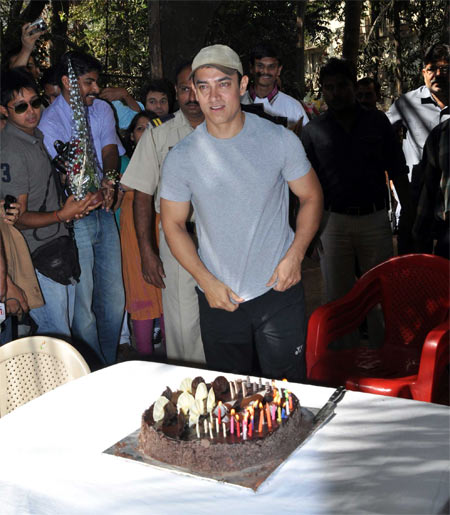 Aamir Khan started his 47th birthday celebrations by inviting the media to his Bandra home in suburban Mumbai at 9am, to cut a cake. Fans from all over India had gathered outside as well, to catch a glimpse of the actor.

Dressed in a grey T-shirt and denims, the actor first thanked the media for coming.

"I would thank the media, who come every year to celebrate my birthday. My day starts with you and I feel blessed," he said, adding, "I am also thankful to God for the kind of respect and success that I have achieved. My wife (Kiran Rao) and I are blessed with a son. I don't think I can ask for more."

'I am very excited about my television debut' 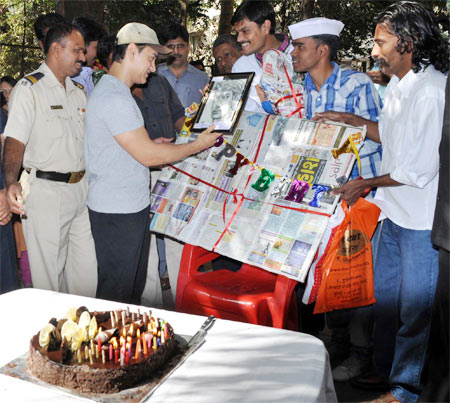 Khan, who usually spends his birthdays with family, will be shooting for his first reality TV show this year.

"I spend my birthdays with my family but unfortunately, this year, I shooting for my reality show," he said.

"I am very excited about my television debut," he added. "The Star team and I are trying to come up with something different. We have been working on it for the last two years. This is probably the most ambitious project of my career."

'Talaash is very close to my heart' 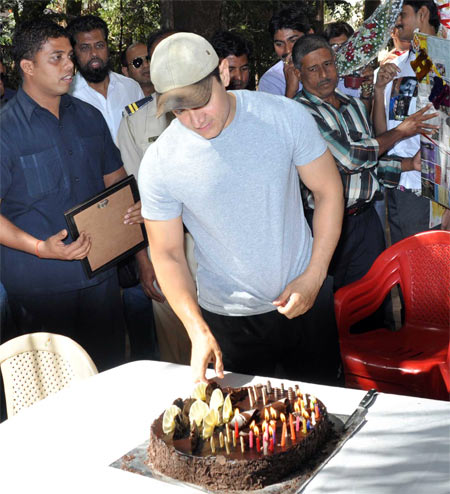 The actor pushed the release date of his film Talaash from June 1 to November to concentrate on his television show. Also, director Reema Kagti needed more time for postproduction.

"Last month, a fire broke out on the sets of the TV show which caused some delay and this has directly impacted the film's release," Aamir says. "Talaash is very close to my heart. Its release has been postponed and will now release on November 30 or December 6. I don't think I will be able to do justice to both at the same time. I have discussed this with Reema, (producers) Farhan Akhtar and Ritesh Sidhwani, and they agreed."

He added, "I am sure my fans won't be disappointed, as we will try and make the film better. Also, fans who have been missing me will shortly see me on the small screen -- it will be aired in a couple of months from now." 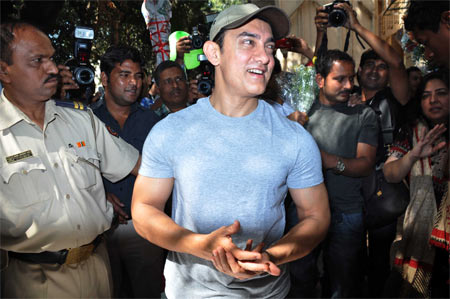 In his last birthday, Aamir had promised that he would get his friend and colleague Salman Khan married by 2012. When reminded of that, Aamir joked, "I hope Salman falls in love soon but no one can force him."

Aamir, who started his movie career as a child artist in Yaadon Ki Baarat (1973), recalled the moment when he faced the camera for the first time. "I was eight years old when I faced the camera (for the first time). I remember all the artists would apply make-up and I would feel very weird when it would be applied to me. I didn't like the smell at all. I was also very nervous, as there were a lot of people on the sets," he said. 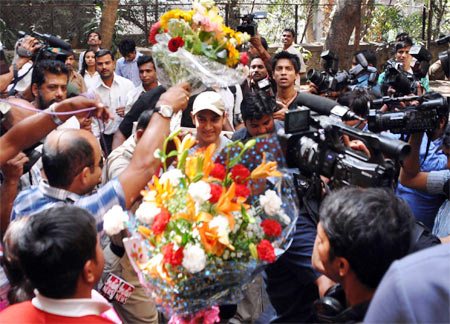 Recently a newspaper called Vidya Balan the female Aamir Khan, thanks to her back-to-back hits with No One Killed Jessica, The Dirty Picture and Kahaani. Aamir seemed happy with Vidya's success but he said: "I think she should be known as Vidya Balan only."

He added, "I haven't seen Kahaani but I've heard very good things about the film. Recently, Vidya has given some excellent performances in her films and I would like to congratulate her. I am glad that she is doing well."