How Quick Gun Murugun got his style 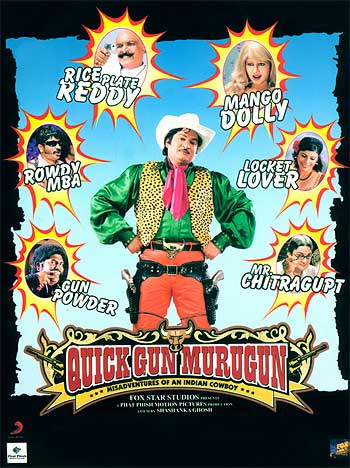 Married to actor Rajat Kapoor, Meenal gave up her photographer job to do something different with her career. She joined Suzanne Caplan Merwanji, the production designer of such films like Snip and Dil Chahta Hai. Meenal did not get a chance to be a part of Suzanne's movies but she did work for ads like Centre Shock, Cadburys and Fevicol.

Her first film was also her husband's directorial debut -- the well-reviewed Raghu Romeo. She later designed for Rajat's Mixed Doubles and Mithya.

When director Shashank Ghosh approached Meenal to style his new cowboy film, Quick Gun Murugun, Meenal happily signed on. She watched a couple of Hollywood Westerns -- mostly Clint Eastwood movies -- for inspiration. The film she repeatedly watched for inspiration was Once Upon A Time In Mexico, starring Antonio Banderas, Salma Hayek and Johnny Depp.

Meenal tells Patcy N how Quick Gun Murugun and Mango Dolly came to be so stylish.

'The most difficult thing to design was the gun holster' 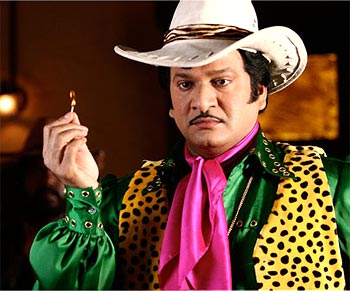 We wanted Quick Gun to be flashy. So instead of leather pants and boots, we used regzine for that plastic texture. We gave him a pink scarf, a green shirt and a yellow jacket. We wanted the cloth to shine, so we chose satin.

The most difficult thing to design was the holster for gun. That isn't found here. Craftsmen can't get it made correctly, as the gun should slide in easily. We had to do a lot of hard work for this. We would get pictures of gun holsters and get a cobbler to make it for us. The design had to look perfect too.

Rajendra Prasad's regzine pants were also layered to make him look fat. We were shooting the film in April in Hyderabad. The poor guy had to really sweat it out. The wig was quite a killer for him too. But he smiled through it.

Since he wore the same outfit throughout the film, we designed three identical pairs for him.

'Whatever Mango Dolly wears, she is a seductress' 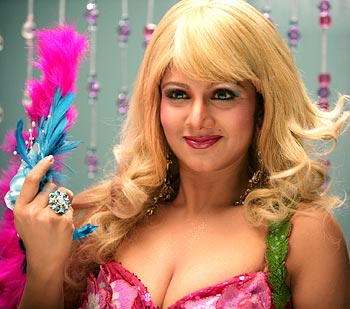 Helen was our inspiration for Mango Dolly, as she plays a cabaret dancer. We tried all kind of make-ups and wigs and eyebrows. After three-four trials, we decided on this look.

Mango Dolly has two looks in the film -- in the night, she is a cabaret dancer. By day, she's the girl-next-door with black hair. She's a typical south Indian girl, wearing a petticoat and blouse. But whatever she wears, she is a seductress. 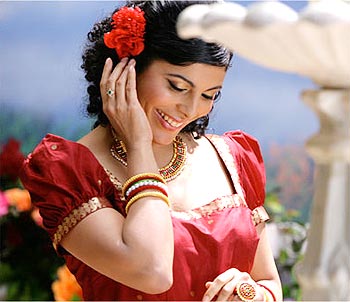 Quick Gun Murugun is in love with Locket Lover. She's a decent girl -- a typical school girl, wearing the South Indian style half sari. Her pallu is always in place -- it never falls like Mango Dolly's.

She has good values. Quick Gun adores her so much so that he keeps her photograph in a locket around his neck.