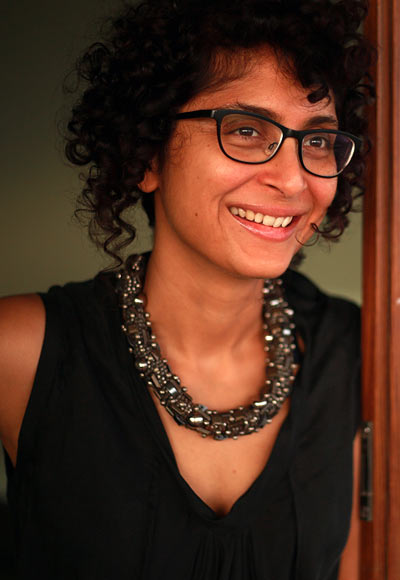 The walls of Kiran Rao's office are full of movie posters starring her famous actor-husband Aamir Khan -- from Delhi Belly and Taare Zameen Par to the film that brought them together, Lagaan. Surprisingly, there are no posters of her only directorial venture, Dhobi Ghat.

Looking pretty in her geeky spectacles, Kiran greets me with a big smile. She instantly recalls our last meeting, when I had interviewed her in 2011, for Dhobi Ghat.

In a long chat, Kiran tells Sonil Dedhia why she wanted to present Ship Of Theseus, why she didn't want Aamir to be a part of the project, and what was the toughest thing about being Aamir Khan's wife.

'Initially, I never thought of presenting Ship of Theseus' 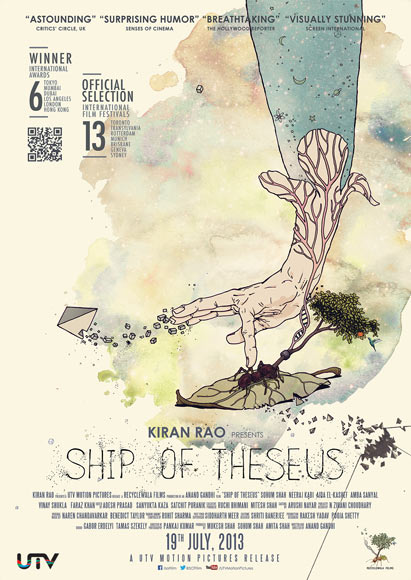 You saw Ship of Theseus at a film festival in Mumbai last year. What was your initial reaction?

I had heard a lot of good things about the film and really wanted to see it. I thought it lived up to all the expectations. It was such a visual spectacle, very beautifully written and performed.

The film connected with me very deeply on every level. I just came out of the theatre and I knew that I had to shake hands with the man who made it.

(Director) Anand (Gandhi) was surrounded by a crowd waiting to wish him. A little later we met and I told him that I really loved the film. We chatted for a little and decided to catch up again.

I wanted to connect with Anand and understand how he made the film.

Is that when you decided that you wanted to present the film?

When I first saw it, I never thought of presenting it. When I met him, I casually asked him if he needed any help with the film.

He said that he wanted to put the film out and get a theatrical release.

I had the experience of working, producing for Aamir Khan Productions and I knew what goes into getting a theatrical release.

We figured out that if I presented the film it would possibly get a bigger platform than it would get if it were releasing on its own. I was more than happy to give my name and my time.

That is a good observation (smiles). There are so many good reviews that we were confused what to put up on the poster. This is one the lucky films that has been unanimously appreciated. The film appears to be serious but actually it has pockets of surprising humour, which an audience would never expect at that moment in the film. Even in our daily lives the most unusual circumstances are funny and as people we find each other funny. 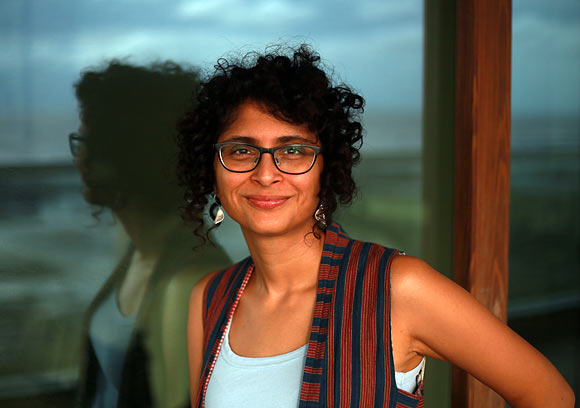 Your name has surely brought in a lot of awareness but didn’t you or Anand think of getting Aamir on board considering his huge fan base?

Certainly, Anand and I discussed this. We immediately realised that with Aamir presenting this film, the audience would have been too large for the film.

Aamir’s name attached to a small film can do a lot of harm and may not be beneficial. His audience is far bigger. They are so loyal to him that they would just come in to watch it without knowing what the film is about.

That was not the audience we wanted for this film. We realised that the audience had to be aware of a film called Ship Of Theseus and what it is all about.

Did Aamir’s association with your own film Dhobi Ghat then hamper it when it released?

Yes, it was a learning experience for all of us.  I am not sure but there was a certain section of the audience who came to watch Dhobi Ghat and were of the opinion that it was not their kind of film.

While it benefitted the film in general, it also taught us to focus on the audience needed for the film and marginally grow it.

'Aamir fully supported the idea of me presenting the film'

How did Aamir react when you decided to present this film?

I actually wanted to show the film to Aamir the very moment I saw it. I told him it was a very special film. I didn’t manage to set up a screening at least for two weeks.

He saw the film and absolutely loved it. He fully supported the idea of me presenting the film. He was a part of the discussions of how to promote the film and the best way to do it.

Aamir’s main input, which we have taken very seriously, is that the film is small and special so don’t compromise it by adding a lot of costs for the promotions. And, secondly, make the audience aware of the film. 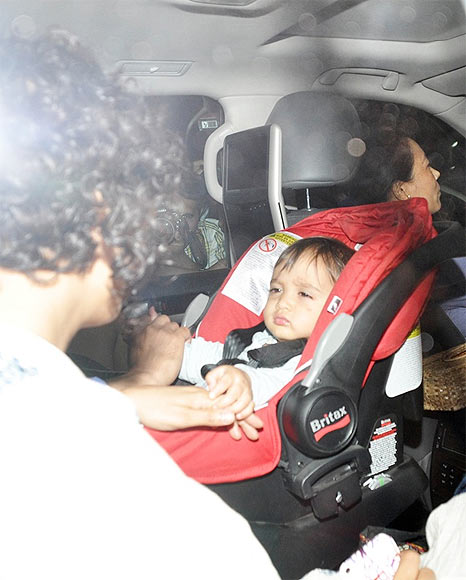 You are both true cinema lovers so is the conversation always about cinema?

Aamir is a bookworm. He is an avid reader and reads almost five times more than I do. I have my reading habit since the time Azad was born.

Aamir likes to read a lot about history so suddenly when he learns something interesting about, say, the Roman Empire, we will discuss it at length.

When it comes to films, we end up watching middle-of-the-road stuff which everybody watches. Most of it is mainstream Hollywood. We do go to the occasional screenings that happen here. We end up discussing the performances and new type of filmmaking and a lot of other things.

So what kind of films do you end up discussing?

I recently saw Searching for Sugarman and I think it’s a brilliant film. I immediately called up Aamir and told him that he had to watch the film.

We loved Beasts of the Southern Wild, District 9.

We also love the X Men series and Guru Dutt films. Most of the time we are at opposite ends when it comes to discussing films, but that’s the fun part of it. 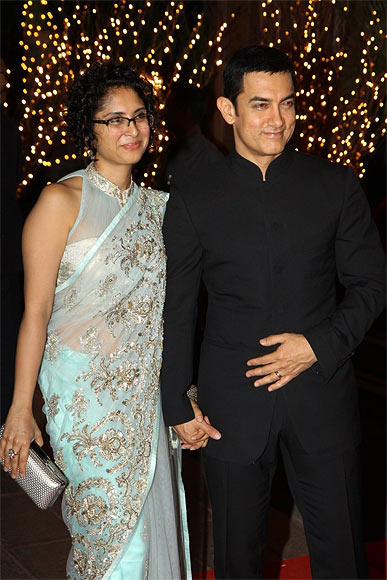 How involved are you with his work?

He shares a lot with me about his work. Sometimes the discussion is about his day-to-day work. He also asks me what should be his next film or how do we plot the way forward for our company AKP Films.

We share a lot as a couple. He is the sort of person who likes to listen to other people’s views and is open-minded about it.

He often bounces scripts or ideas off me, or any decisions that he wants to make. He is also close to (sister) Nuzhat and (cousin) Mansoor Khan.

As an ordinary viewer, what do you have to say about Aamir Khan the actor?

As a kid, I absolutely enjoyed him watching him in Qayamat Se Qayamat Tak. I loved his natural, beautiful and youthful character.

Over the years, I feel an actor has grown out of him. I have enjoyed the kind of characters that he has played. I am always excited to see what he does next.

Aamir always tries to bring his character to life and tries to do good stories. 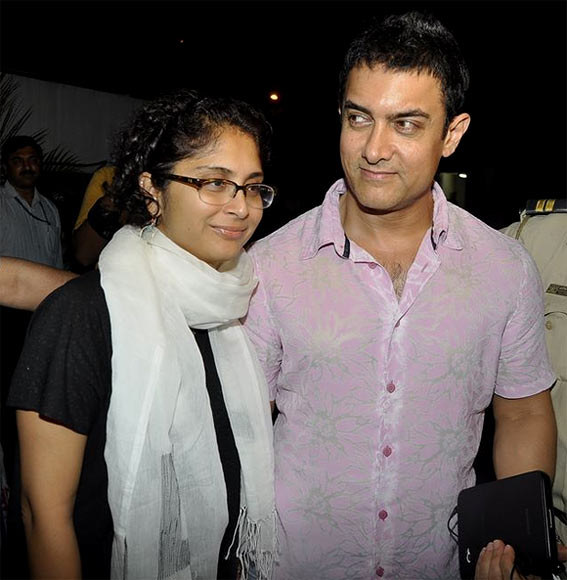 What is the toughest part of being Aamir Khan’s wife?

There isn’t anything tough about being Aamir Khan’s wife except that there is always lack of privacy.

Also, there is the expectation that I have to be presentable all the time (laughs). I am a little more careful about how I dress and how I look.

Apart from that, there isn’t any pressure. 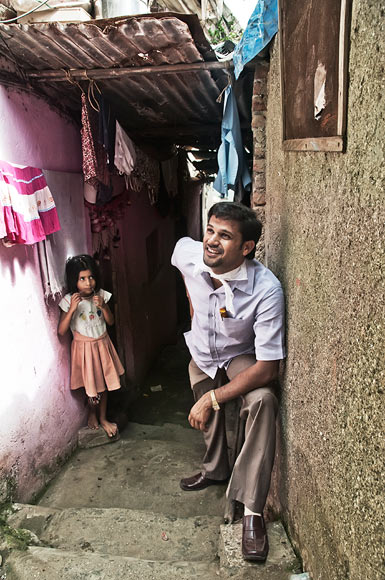 Many films like Ship of Theseus are being made but distribution remains a problem. How do you think we can solve this issue?

Not only in India, but worldwide, small films have a tough time releasing. The fact is that there is a greater infrastructure available for small films in developed countries than in India.

We must develop alternative exhibition venues for films like Ship Of Theseus. We also need to look at alternative ways of putting out the film.

We can’t always have a theatrical release. Worldwide people have accepted that not every film will get a proper release with proper promotions.

I feel online distribution is one of the solutions and has a future because people don’t have time to go and watch all the films in theatres.

Is that the reason you are primarily promoting the film on a digital platform?

Yes, we did a lot of brainstorming and thought that the traditional approach to promote the film wouldn’t be very helpful.

The best route available for us was to use digital platforms, as a large audience for this kind of film is connected digitally though certain social networking platforms. 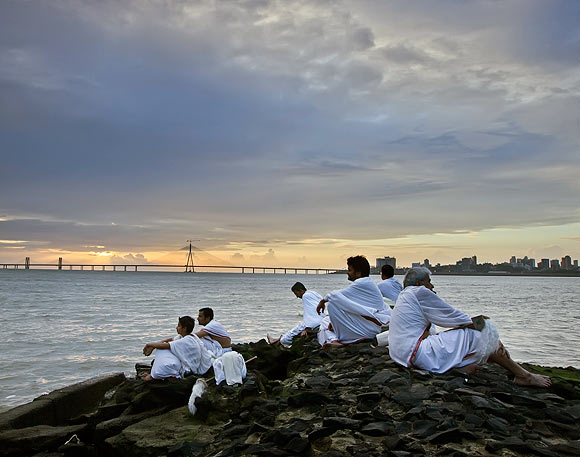 You mentioned alternative exhibition venues. Do you have any plans to do it yourself?

That has been a long term dream for me. I have been trying to do this for quite some time now.

Ever since I came to Mumbai, I’ve been thinking that my kind of films have to release somewhere. They don’t have to be big places because art films don’t have a big audience.

With Ship Of Theseus also, our initial plan is to release the film in five major cities across India in around 25 to 30 screens. Later on, when people become aware through word of mouth, we will try and act accordingly.

Are there any plans to present more films in the future?

I am not looking to do it for the long term. It takes a lot of passion, energy, effort and time to do it.

I have more than happily put aside six months for this film because I genuinely loved it. The six months of time away from my own script, away from my son Azad and away from things that I am doing. I just don’t want to attach my name to a film and not do anything.

Also, I don’t want to attach my name to something that I don’t enjoy. I am not the only one who can do this. There are so many people in the industry who can do it.