The ashram where Julia Roberts 'found' herself 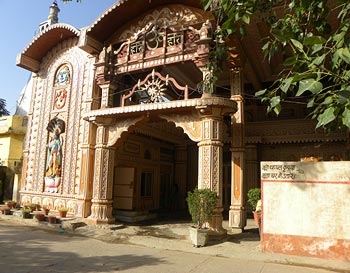 Residents of Pataudi village in Haryana, located about 40 km outside Gurgaon, say that the nearby Hari Mandir Ashram has never attracted much attention.

And its sleepy 25-acre campus certainly looks the part of a typical ashram: a magnificent temple, a school for 500 students, dormitories for men and women, an old-age home and a clinic.

So Pataudi residents were quite shocked about three weeks back, when they first noticed the influx of out-of-towners and foreigners making their way in and out of the ashram's main entrance. 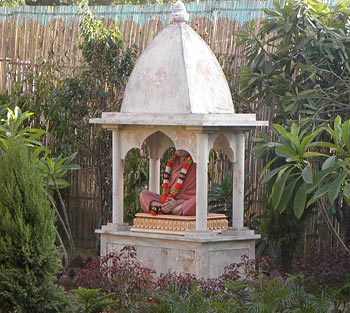 "Very rarely do we see so many outsiders coming and going from Pataudi. I believed that they had come to meet the ashram's spiritual leader, Swami Dharmdev," says one local chai wallah.

In fact, residents were actually noticing that crew for Eat, Pray, Love had arrived in their tiny town to set up the India leg of the film's shooting.

Soon following the crew, of course, would be none other than Hollywood star Julia Roberts, who reached Pataudi with her children on September 17, where she's staying at the Pataudi Palace, located just a few hundred metres from the ashram.

A tete-a-tete with a Swami 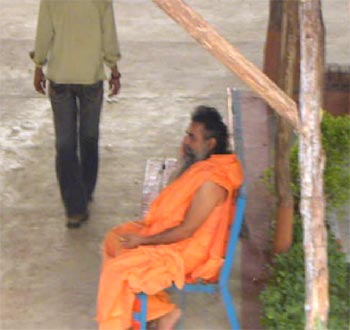 In speaking to locals and a few ashram students and crew at the ashram, rediff.com has learned that filming at the Hari Mandir compound started on September 20, and continued for four or five days.

Ashram students seemed particularly pleased that Roberts met Swami Dharmdev on just her second day at the ashram, and was very respectful. She also brought her children to meet him, and told Dharmdev the children's Hindu names: Mahalaxmi, Krishna Balaram and Ganesh.

They reportedly spent roughly thirty minutes in conversation, during which the Swami tied Raksha-Sutra protective threads around the family's wrists. They also posed for a lone photograph, in which a kneeling Roberts, at the side of a seated Swami, looks the very picture of bliss.

'Madame is a very talented actress' 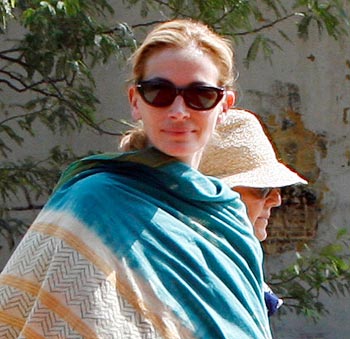 Over the four days of shooting, scenes featured Roberts memorising and chanting the 182-verse Gurugira mantra, washing temple floors, leading a spiritual retreat for new ashram devotees, cooking and serving food for a communal meal and finding a vision of God atop the ashram roof. Shots were taken all over the ashram campus, but were focused primarily in the temple.

Surprised workers relayed that Roberts ate food with the rest of the team, and that she caused no fuss throughout the shooting. Not so with Indian stars, they reported. She even ate the same food as the cast and crew: 'dal, subji, paneer, roti, gulab jamun'.

Many of them even got to shoot as extras in the film, and said that Roberts was a true professional and had her part memorised perfectly. "Madame is a very talented actress," says one boy, who shot for one of the communal eating scenes. 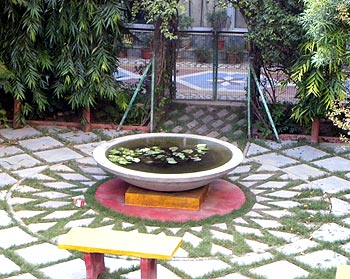 And though the Pretty Woman star managed to make a good impression on literally everyone we spoke to, for some reason the international media is already off and running with reports that locals, ashram students and even Hindu groups are in a 'furore' over alleged lack of access to the Mandir.

"The media people are just looking to sell stories. There's no outrage here. We are all honoured to have such famous and respectful guests," says one student, who adds that a few journalists have approached him for quotes, but turned away disappointed when he only had nice things to say about the shooting.

They say it's true that during the week of shooting access to the ashram was somewhat restricted, but that they still had the opportunity to pray every day from 4 am and 8 am.

'Delhi seemed pretty crazy to me, but this Ashram life is great!' 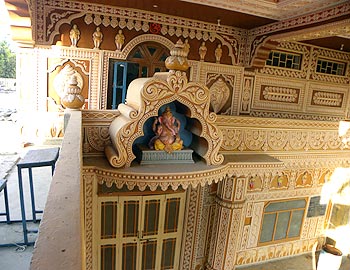 In fact, members of the film's art team are still at the Ashram, as they've set-up a base of sorts. And according to both Ashram staff and the foreign film crew, things are going swimmingly!

"I love it here," said one female art director from New York City. "It's so peaceful at the ashram. And we've been treated very, very well by the staff and students. It's been a heart-touching experience. When we landed in India, Delhi seemed pretty crazy to me, but this Ashram life is great!" 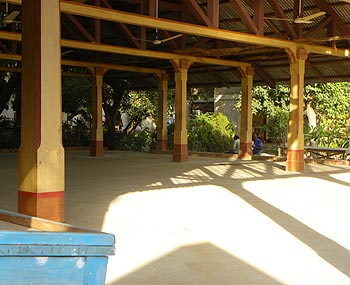 Before ever leaving the comfortable environs of New York City, Gilbert was allegedly already a serious practitioner of yoga shakti and a devotee of Siddha Yoga guru Gurumayi Chidvilasanada.

But it's only after she travels to the Siddha Yoga ashram in Ganeshpuri, Maharashtra, and there loses her ego and memorises the 182-verse Gurugita chant that she finally flirts with enlightenment.

Interestingly, Gilbert deliberately doesn't mention the ashram or guru by name in the book, though context clues make it quite clear. Likewise, the film crew chose to film in an unspecific ashram, finally deciding upon the Hari Mandir in Pataudi, which will not be named in the film.