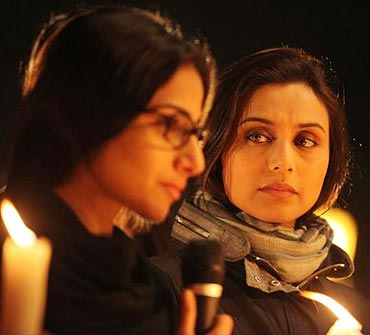 Rani Mukerji and Vidya Balan come together for the first time in 2011's first release, No One Killed Jessica.

Much has been written about their animosity but they maintained a fun atmosphere when Sonil Dedhia met up with them. Watch this video to check it out.

The actresses talked at length about the film, about being friends, and much more.

The response to the film's promos has been fantastic.

Vidya: Yes, the response is fantastic. We were expecting good response from the audience but this has exceeded our expectations. This response has increased our responsibility. Now I am keeping my fingers crossed that we all can live up to them.

Rani: I am delighted; it feels good to hear that people are talking about the movie. The songs are getting a good response too. As an actor, what more can one ask for before the release?

'People have become proactive and are looking to be torchbearers' 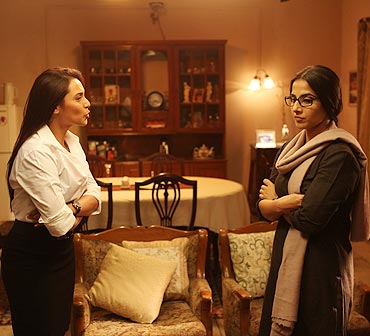 The songs are doing well too.

Vidya: The songs are enjoyable. Normally when you are working on a film where the story is serious, you tend to give slow music. But (music composer) Amit Trivedi is completely different. Amitabh Bhattacharya's lyrics are so fresh that as soon as you hear the song, you start humming it.

My favourite song is Aitbaar, based on my character. It's a fusion song that is very effective.

Rani: I love the songs. I am in love with Aali Re. That defines my character, who is bold and courageous and doesn't really bother about anyone. I also like Dilli because it defines the city. Hats off to Amit Trivedi. He hasn't done many films but he brings in certain kind of maturity in the way he deals with his music.

Did you have any apprehension about doing the movie, as it deals with a very sensitive subject?

Vidya: I don't think so. The verdict of the case has changed the way people think about the judiciary system. People have become proactive and are looking to be torchbearers and want to get justice.

Rani: At the end of the day, if we are able to educate people to take things in their own hands and fight for themselves legally, there is no harm in doing such a film. I feel proud to be a part of it.

'I didn't think it was necessary to meet Sabrina Lal' 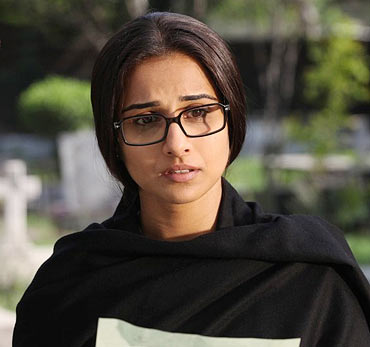 Tell us about your characters in the film.

When I read the script and took up the role, we had access to almost everything that had happened with the case through various medium. But what I wanted to know was her emotional journey, which was not possible. I didn't think it was necessary to meet her. She discussed everything with director Raj Kumar Gupta, and I was confident about him.

My role as Sabrina had to start even before the incident took place, so she was a regular girl, living a very cushioned life when suddenly reality hits her.

Rani: I had to play a character of a crime reporter called Meera. I have faced a lot of entertainment reporters and thought it would be easy to do this role. When I started getting into the character, I realised how difficult crime reporting is.

Also, I had to portray the role of all those 10-12 reporters who had actually covered this story and had helped to solve the case, so the scenario became tougher. I have immense respect for crime reporters as their work is very dangerous and you have to be brave enough to face any kind of situation.

'I was Sabyasachi Mukherjee's first love and now he left me for Vidya!' 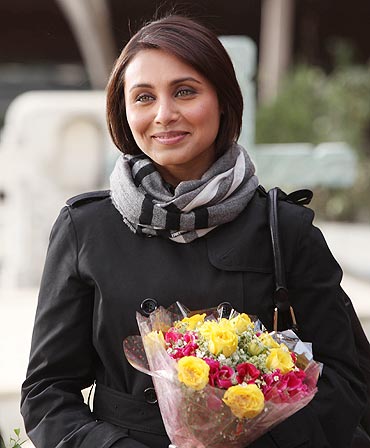 Sabyasachi Mukherjee has done the costumes for the movie. How difficult was it to manage both of you together?

Vidya: Only he can answer this question. My look in the film is very subtle. There's no shape to the clothes I have worn in the film. I've worn loose t-shirts, men's shirts and loose jeans, and spectacles. The look was given on purpose to show that Sabrina was like any other girl.

Rani: Sabyasachi is a fantastic designer and I don't think he faced any problems. I was his first love and now he left me for Vidya! (laughs)

'Grey shades are the most difficult to perform' 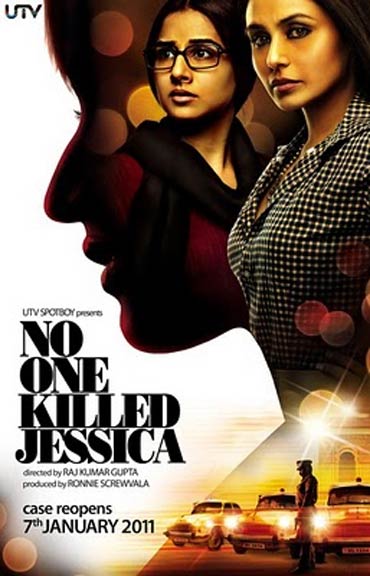 Both of you shared a good chemistry while shooting for the film. Apparently, Rani would tease Vidya quite a bit.

Vidya: It's a treat to work with Rani. As an actor, I have immense respect for her. It felt great to share the screen space. Yes, it's true that Rani would tease me and make me laugh.

Rani: I have always been a big fan of Vidya's and was looking forward to doing a movie with her. During the shooting for the movie, every time she would look at me, I would tease her by putting a thumb in my mouth. She had done this in Ishqiya.

What is your favourite film of each other's?

Rani: Ishqiya. It's those roles with the grey shades that are the most difficult to perform. And that's what Vidya did in Ishqiya. If I had to choose her best film, it has to be Paa.

'We have two different roles, which compliment each other' 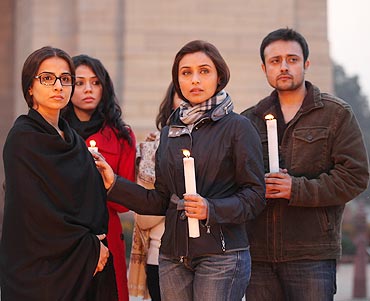 Can two actresses be best friends?

Rani: I don't think so. But I shared a good relationship with Vidya. Also, in the movie, there is no love triangle, so we have nothing to fight for.

As an actress, I have a lot of respect for Vidya and have always admired her acting. Both of us believed in the film; that's why we are together. I always wanted to do a film with her. We were going to do Laaga Chunari Main Daag but for some reasons, it didn't work out.

Vidya: I agree. I have always had this image of a superstar (when I thought of Rani) and as she mentioned, I was also looking forward to working with her.

In this movie, we have two different roles, which compliment each other. So we were never trying to outdo each other. I think we are secure actors; there is nothing to fight for.

'Thanks to Sabrina, so many other pending cases have now re-opened' 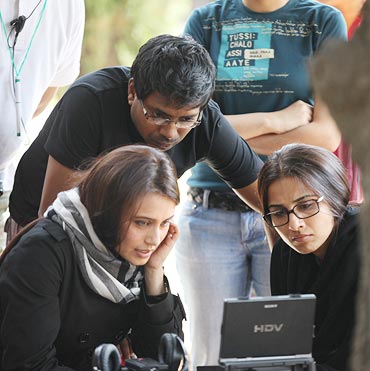 Raj Kumar Gupta is just one film old. Any doubts about him doing the film?

Vidya: Looking at his first film Aamir, I don't think anyone would have any doubts working with Raj Kumar Gupta. He is a director who has his head over his shoulders and is completely confident about what he wants to do.

Rani: Yes, I agree. One can never doubt his capabilities. He has a vision in mind and is a very sensible director. It doesn't feel like you are working with a director who has done just one film before.

You met Sabrina Lal for the first time at the trailer launch. What changes did you see in her?

Vidya: When I met Sabrina, she hugged me and said 'finally'.

As a person, she is very mature. She has evolved as a stronger person and her perspective has changed towards life. I can only admire her as she bravely fought for 10 long years. Thanks to her, so many other pending cases have now re-opened.

'There's nothing wrong in my abusive tone in the film' 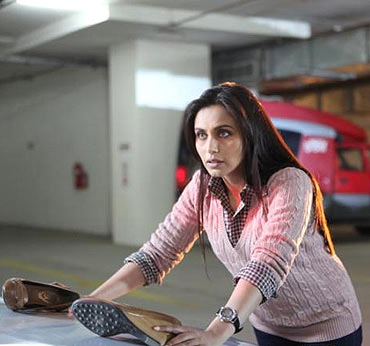 The Censor Board had objected a lot of scenes.

Vidya: If there is something that needs to be highlighted even at the cost of getting an 'A' certificate, then I think it is justified.

Rani: I'll be more than happy if the film gets an 'A' certificate. I don't think anything should be censored because everything is such an integral part. When it comes to my abusive tone in the film, the script demanded it. There's nothing wrong in it.

Vidya: I have Sujoy Ghosh's Kahani and Milan Luthria's The Dirty Picture.

Rani: I am doing Reema Katgi's film. She is a brilliant director. It feels great to be back with Aamir Khan. I had done Ghulam with him and have always learnt something from him. Before Ghulam, I had done Raja Ki Ayegi Baraat, which was a woman-oriented film. Now again, I am doing No One Killed Jessica which is a woman-oriented film. It's like a full 360 degrees turn.

'Hrithik Roshan was unbelievable in Guzaarish' 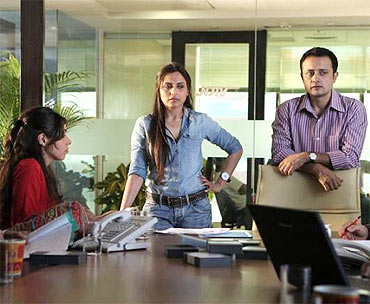 Now that the year has come to a close, who do you think was the Best Actor, Actress of the year? Also, pick the Best Film, and Best Song of the year.

Vidya :I would vote for Hrithik Roshan in Guzaarish. He was unbelievable! He just used his face to express himself in the whole movie, and of course, his body. He is so convincing that you actually want him to die.

I am not clued in with anyone else's performances, so I cannot answer the second part (laughs).

Taking everything into consideration, I would go for Ishqiya for Best Film. The Best Song would be Dil Toh Baccha Hai from Ishqiya.

Rani: I would pick three actors: Shah Rukh Khan for My Name Is Khan. He was adorable in it.

Ranveer Singh for Band Baaja Baraat. He is the new star on the horizon. I was blown away by his performance.

I haven't seen Guzaarish but I am sure being a Sanjay Leela Bhansali film, and Hrithik Roshan performing the role, he must have done a fabulous job!

There are two actresses in the Best Actress list: Vidya Balan for Ishqiya. I have always liked her work.

And then Anushka Sharma for Band Baaja Baarat because she is a bright talent.

The Best Film would be My Name Is Khan, and Best Song is Sajda from My Name is Khan.