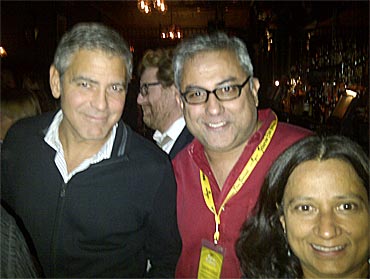 "George Clooney will be there, so we have to go to the Fox Searchlight party," my friend Geeta Misra said to me. It was around 10.30 pm on Saturday evening and we had just come out of a very engaging tribute to Clooney -- one of the honourees at this year's Telluride Film Festival, in the United States.

At the tribute we saw clips of his major films -- Out of Sight, Syriana, Confessions of a Dangerous Mind, Good Night and Good Luck, Michael Clayton, Ocean's Eleven, Up In The Air, O Brother, Where Art Thou and his new film The Descendants (Fox Searchlight is distributing The Descendants).

This was followed by a conversation between the very funny and self-deprecating Clooney and the more serious The Hollywood Reporter critic Todd McCarthy.

In the casual conversation we learned that Clooney had auditioned for the supporting role in Thelma and Louise but eventually his friend Brad Pitt got the role. Alexander Payne had approached Clooney about casting him in Sideways, but then the actor did not hear from the director, until two years ago when they met up for a meal in Toronto. Over the meal, Payne offered Clooney the lead role in The Descendants.

And Clooney did not shy away from talking about his work on television -- sit-coms such as Facts of Life, Roseanne and Friends, and the one day deep into the first season of E.R. when a man stopped him on Fifth Avenue in Manhattan and said "Hey George, how's it going?"

"That's when I realised that I had made it," Clooney said. 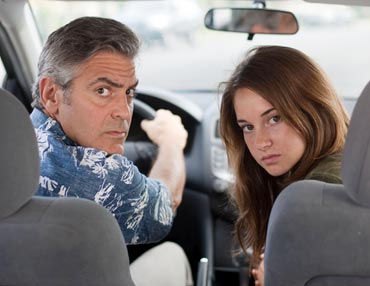 Image: A still from The Descendants

Initially, I felt I had seen enough of Clooney for that evening, albeit in a large theatre. But the idea of seeing Clooney in person again -- one of the biggest global movie stars of our times and this time at a private party, seemed exciting. I consider myself a serious journalist, often writing about films, but I am also a fan of movies and stars. And I had sent an RSVP for the Fox party.

"Okay, one drink," I said to my friends as we walked to the party.

We arrived at the Fox party inside the bar at Telluride's historic New Sheridan Hotel and it was still relatively quiet. The waiters were ready to serve us drinks and there was plenty of food. Half an hour into the party, I saw Payne standing by the bar and talking to a few people.

Earlier that morning I had spoken to Payne as we stood in line to get breakfast at a coffee shop. I said to him that I really liked The Descendants. He thanked me, asked me my name, and I told him, even though I knew he would forget it within minutes.

"George Clooney was so good in the film," I said to Payne. "I think you have made it possible for him to win the best actor Oscar for this year."

"I hope so for his sake," Payne responded.

Now seeing Payne at the Fox party Misra turned to me and said: "Skip your film!

Perhaps another half hour and we suddenly realised Clooney was indeed there. We had not seen him arrive. He stood next to the bar, looking most relaxed, chatting with a middle-aged couple. He was wearing jeans, a button down shirt and a dark blue cotton sweater. His gray hair was cut short. His face lit up and animated, as he laughed at whatever his friends were saying. 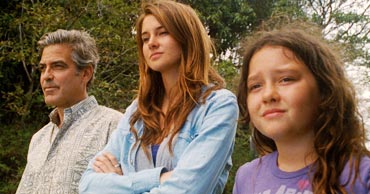 Image: A still from The Descendants

Misra walked up to him, even as I told her to give the star his space. As she approached Clooney she turned back and asked me to take a picture of her with him. "Is he okay with it?" I asked as Clooney turned to face me with my BlackBerry in my hand. "Oh yes, I am fine with it," Clooney said to me. So I took a picture of Misra and Clooney.

Now Misra started nudging me. "Go you ask him for a picture," she said. I wanted to do so, especially since some friends in New York often joke that because of my gray hair I somewhat resemble Clooney. They call me desi Clooney! But I admit I felt awkward, almost shy. I walked to the other end of the bar and got another glass of wine. By now there were more people surrounding Clooney.

Perhaps another 15 minutes and I noticed Clooney was obliging other people with pictures. Three glasses of Chardonnay in my system and I saw an opening right next to Clooney. And so I finally approached him even though he was still talking to other people. I handed my BlackBerry to a young filmmaker who stood nearby staring at the movie star.

"Hey George, can I get a picture with you?" I asked, still feeling as if I was disturbing him. But Clooney seemed cool. Quite mechanically he turned to my direction, stood right by me and gave a smile for the picture. Misra also joined us. It was all very quick. The young filmmaker clicked the picture, handed me back my BlackBerry. I thanked Clooney for the picture. I think he heard me, but he had already turned away from me.

But now I have a picture to prove that I was at a party with George Clooney!