Anushka: I am an Anti-Yash Chopra Heroine 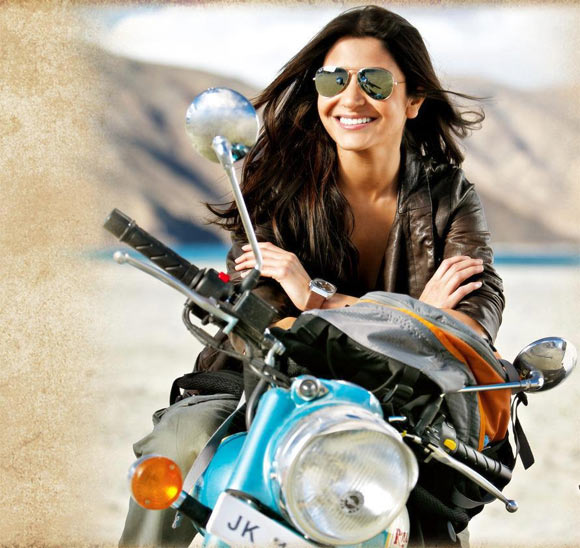 Anushka Sharma boasts of being the only actress to have been directed by both the Chopras -- the legendary Yash Chopra and his son Aditya Chopra.

In this interview with Sonil Dedhia, Anushka recalls her equation with Yash Chopra, why she enjoyed playing the anti-Yash Chopra heroine and why she is critical about her performance.

What was your first reaction when you received the offer for Jab Tak Hai Jaan?

Adi (Aditya Chopra) called me to his office and told me about it.

I was very happy and excited but at the same time, I was a bit emotional because I just didn't think I would ever get a chance to work with Mr Yash Chopra.

In every actor's career, there are some directors you want your name to be associated with. If today, there was any other actress playing Akira's character, I would be dying.

'Yashji had a fantastic sense of humour' 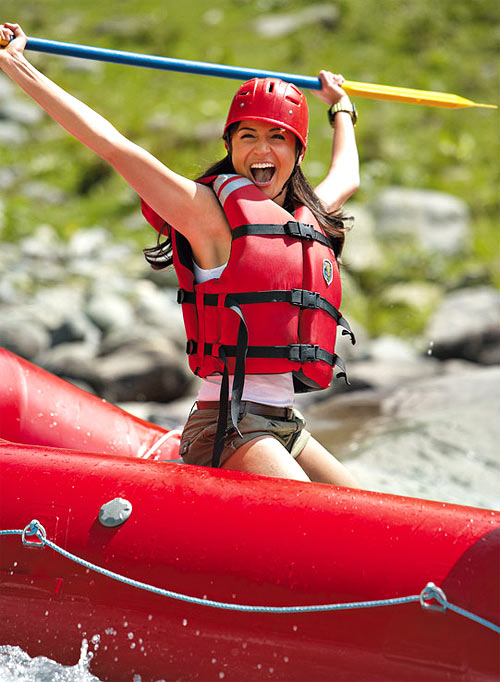 From knowing him as a producer to working in his last film as director, what was your equation with Yash Chopra?

When I used to meet him earlier, there was a bit of distance like when you respect someone so much there is a little awe.

I can't go up to Shah Rukh or Mr Bachchan (Amitabh) and say hi or hello; there is a lot of respect.

When I started working with him, I realised he was so relaxed and funny. He had a fantastic sense of humour. He was so warm and genuinely concerned about actors and crew. He was a creative director, who wasn't bothered about numbers and figures.

What was your last conversation with Yash Chopra? Any one compliment he gave you that you remember?

I did have long conversations with Yashji during the shooting of Jab Tak Hai Jaan but someone would always be around.

However, bizzare as it may seem, the last time I met him at Rani Mukerji's house, when she had a Ganpati puja, he called me and spoke to me for an hour about almost everything.

He spoke about what he thought about me in the film, he singled out some scenes that he thought I did very well, he told me where I was looking nice etc.

He actually told me all the things I wanted to hear after the shooting was over. Had it not been for that day, I'd have missed the opportunity forever as sadly he is not with us today. I would have had this empty, incomplete feeling that Yashji did not tell me how I was in the film.

He could have taken any actress-and actresses die to do a Yash Chopra film-and he took me. I just wanted to make sure he was happy with the decision. I hope I justified his choice...

'Yashji was cooler, funnier and younger than his age' 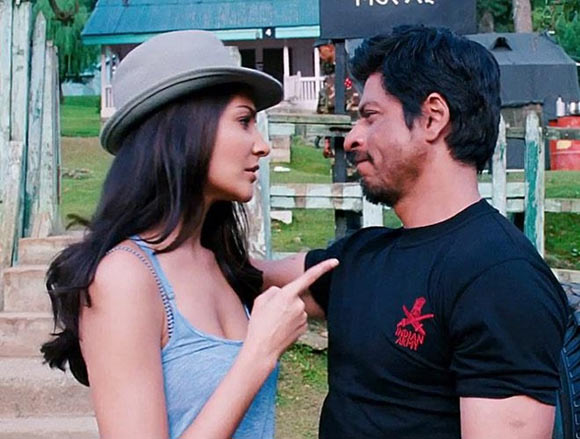 You are the only actress who has worked with both Yash and Aditya Chopra. How are they similar and different?

I feel special that I got the chance to work with both of them.

Yashji made eternal love stories, stories of man-woman relationships. Adi makes stories about principles, correctness and goodness. That is the basic difference between them as directors.

Yashji is much quicker and faster, he takes one or two takes. Adi is also quick compared to other directors, but he still prefers taking extra safety takes.

Yashji was cooler, funnier and younger than his age. I think age is just in the mind; at times I felt older than him in thought process! He was way funnier than Adi. He took things lightly, he was relaxed. Adi is very special to me as he is my first director. But he is very influenced by his father's cinema.

Adi is also funny but his sense of humour is not as good as Yashji's. He tries to do everything correctly, transparently and does it with principles.

I agree. All the actresses in his films look good.

That is not because of physical appearance or any special treatment done to face or hair. It is because of the respect and love he had for them.

It is the vision that he saw and translated that on screen. As a man he was very chivalrous, he was a believer in beauty, so I guess that's why.

'Katrina's character has a new twist for a Yash Chopra heroine' 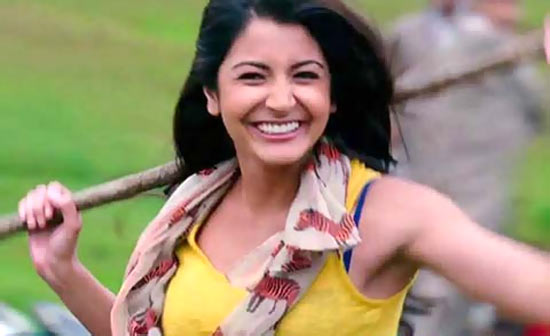 You are not the typical heroine role in the film. Did you miss being a conventional heroine in a Yash Chopra film?

Akira, the character I play, is unique and new in Yashji's films. When I saw Veer-Zaara, Rani came out to me as a strong Pakistani lawyer, something not seen before in a Yash Chopra film.

I play a 21-year-old documentary filmmaker who is ambitious. I am trying to fulfil my dreams. According to the character, love can come in the way of her success and dreams.

This is the difference between the two characters. Even Katrina's character has a new twist for a Yash Chopra heroine.

Even though Jab Tak Hai Jaan has an old world charm about it, the expression and language of the film is very contemporary.

The film at the outset grabbed attention for the first-time pairing of Shah Rukh Khan and Katrina Kaif. Do you worry that you may be sidelined?

No, not at all. When you are offered a movie, you know the script and the role. Nobody blindfolds you into a film.

The nature of Yashji's film has always been a triangle. His stories are basically about the relations between three characters and how they are interlinked with each other. Take Dil Toh Pagal Hai or Veer Zaara. You can't say that Rani Mukerji or Karisma Kapoor was given a smaller role. The strength of the roles in his films is that they are always equal. 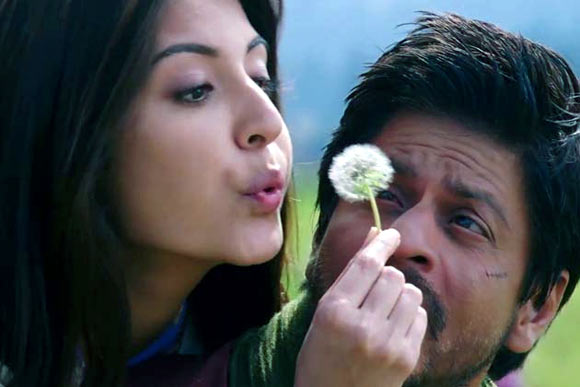 Did you get a chance to share screen space with Katrina Kaif in the film?

Yes, we have quite a few scenes together.

I got along with Katrina and I think that holds true for her too. We had a good working relationship. You know that when you don't have to make fake conversations just to show how good a friend you are.

We gelled with each other. I think neither of us is very girly. We didn't sit down and discuss hair, make up, shoes or clothes.

Honestly, if I were asked who I would like to act alongside in a film with two actresses, I would choose Katrina.

You have worked with Shah Rukh before. Did you see any change in him this time around?

He is the same -- the most lovable guy. He is still my favourite co-star. He is still a very selfless actor, a team player, frank, honest, and great fun to be around.

'I rely on my brother to approve my scripts' 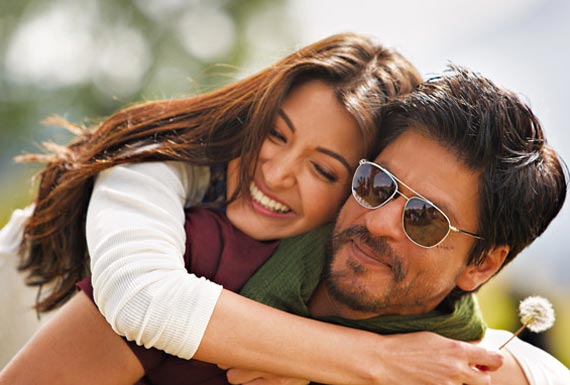 Are you critical about your performances?

I am more critical about my performances than all the critics put together!

I genuinely don't understand why people raved about me in Band Baajaa Baaraat. In my head, I hadn't done anything special.

I get so critical about myself sometimes that it isn't good because that never leaves me happy with what I have done.

Do you consult with anybody in the industry or outside about your films?

My brother. I rely on his approval of my scripts.

'The concept of heroine-oriented films is very regressive' 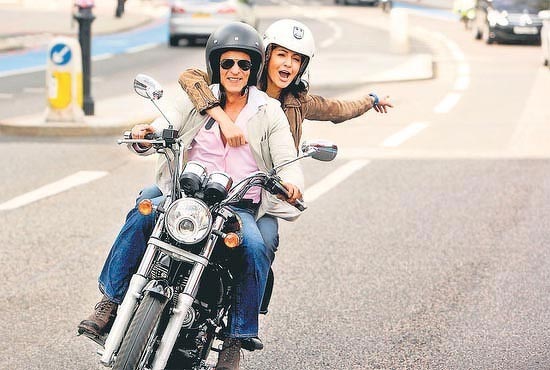 You have had commercial success. Would you like to act in a strong heroine-centred film?

People make things very frivolous when they say heroine-oriented roles. It's just a film where the main character is a girl.

The concept of heroine-oriented films is very regressive according to me. If there's a story that is told from the point of view of a girl, of course I'd like to do it. But I won't pick up a script just because I have the maximum screen time. I'd rather do a film that is going to be a commercial success.

Here, I am not talking about the Rs 100-200 crore films; it should just be a successful film, a film that people will want to watch.

Does the uncertainty of stardom ever worry you?

Stardom is nice but because I am an outsider in the industry, I don't want to get sucked into this too much.

I have this sense of practicality that this is temporary. Right now, I am getting many offers because my films have done well. But it's not going to be an ongoing process.

I don't want to get delusional about where I am. I keep a constant check by saying that this isn't my entire life.

Honestly, 10-15 years down the line I wouldn't even want to remain an actress. Probably I will be married and driving my kids to school!