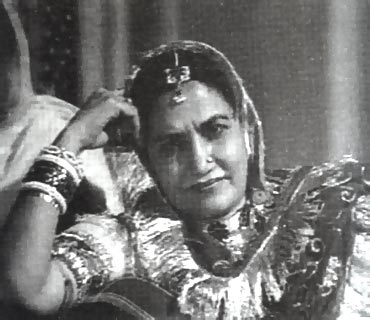 The English version of Shaukat Azmi's Urdu book Kaifi & I was recently launched by the author's grand-niece, Tabu. Translated by Nasreen Rehman, the book is a beautiful take on Shaukat's journey with late poet husband Kaifi Azmi, and includes the lives of their children Shabana Azmi and Baba Azmi.

We present excerpts from the book.

When Muzaffar Ali started work on Umrao Jaan (1981) he offered me Khanam's role. I was more interested in playing Umrao's mother, but Subhashini who was Muzaffar's wife at the time, impressed upon me that Umrao's mother is a lackluster and helpless woman whereas Khanam who is a strong, autonomous and impressive woman is a far more interesting character to portray.

I am glad I took Subhashini's advice because to this day I get praise for my performance as Khanam, a worldly woman who runs the premiere salon of courtesans in Lucknow. In fact, after watching the film Kaifi told Subhashini, 'Shaukat is so convincing as Khanam that had I seen the film before I married her I would have investigated her family tree!'

After Umrao Jaan I worked in several other films such as Bazaar (director Sagar Sarhadi, 1982), which explores the tragedy of young Indian girls who are 'sold' into marriage to rich Arabs from the Gulf.

Lorie (director Vijay Talwar, 1984) is a compelling story about a young woman, Geeta Malhotra (played by Shabana), who loses her first child and is unable to have another. I played the mother of the child Geeta kidnaps and brings up as her own.

I worked with Muzaffar Ali for the second time in Anjuman (1986). Even though I play the role of a trouble-making busybody, this film is close to my heart because it is the story of SEWA, a self-help organization for women that trains them in chikan embroidery and markets the finished goods for them. Shabana plays Anjuman, the young woman who galvanizes the chikan embroider workers in Lucknow, in a struggle to transform their lives.

Excerpted from Kaifi & I, Zubaan Books, with the publisher's permission. Rs 295. 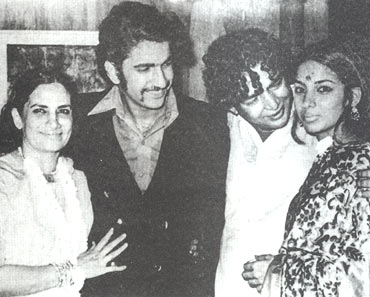 One morning, in 1988, Mira Nair arrived at my house in Janki Kutir and said, 'Shaukat Apa, I am making a film called, Salaam Bombay. I would like you to act in it.'

By now I had given up acting because of chronic health problems and showed little interest, though I did ask her what the film was about. She narrated the story in some detail and told me that the film was about the prostitutes of Kamati Pura, and offered me the role of the Madam of the brothel.

Trying to slip out of doing the role, I said, 'Madam of the brothel! I have never set eyes on such a creature.' Shabana called out from inside, 'Mummy, you must do her film; she is a good Director.'

I asked Mira about her earlier work and she told me at some length about a documentary that she had made on cabaret dancers. 'I shall give you a videocassette that you must watch. You will see how I went into their homes and filmed them, even though I had to face many difficulties including police harassment -- but we got away with making the film.'

Now, I was interested and asked Mira, 'What makes you think that I can play this role?'

'I have seen you in Garm Hawa.'

I looked at her perplexed, 'Garm Hawa! The two characters could not be more different!' 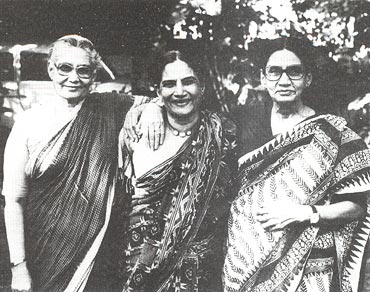 She laughed and said, 'You give yourself completely to your part. It's not as though you're trying to prove, "Look this is I, Shaukat Kaifi, playing this role!'"

My interest was further aroused, 'I am not sure I can play this role because I have no idea what that world is like.'

She persisted, 'I shall take you there and introduce you to these women who are wonderful. I have been working with them for the past year and a half, and am also running a workshop for twenty-five children.'

The following afternoon I went with Mira to Kamati Pura, Bombay's famous red light district. My eyes were searching for a role model whom I found sitting under a tree. I observed her very carefully. She was a middle-aged woman who was busy playing cards with a male friend. I went up to speak to her, and saw that her arm was burnt and she was trying to hide an ugly scar. I could not bear the sleaziness that permeated the atmosphere and left hastily. This was certainly not a project for the fainthearted. I decided to face the challenge. The following week I re-visited Kamati Pura several times with Mira.

When we started shooting Mira booked two rooms in a nearby hotel for make-up and other facilities. On the first day, when I descended the stairs all made up, nobody could recognize me. Mira was pleased with my first shot, as was Sandi Sissell, the camerawoman, who was from the United States. I knew I had succeeded in portraying the charater when the local prostitues laughed and said, 'Lordy, can it be true that she is Shabana Azmi's mother? She's a real Madam! Look at that brazen expression in her eyes!'

After the shoot Kaifi came to pick me up and I got into the car without bothering to remove my make-up or change my clothes. He looked at me and said very quietly, 'You could have at least spared a thought for my reputation.' 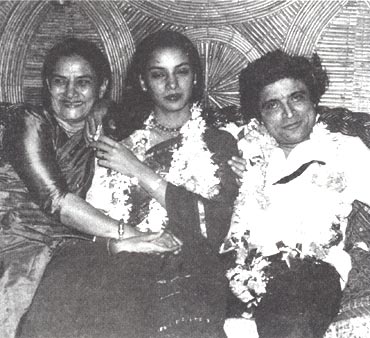 As a little girl Shabana was convinced that I loved Baba more than I loved her. Perhaps, there was some truth in this because Baba's arrival had filled some of the void left by Khayyam's death.

One morning, when Shabana was nine years old and Baba just six, I was giving them their breakfast and picked up a toast from Shabana's plate, saying, 'Betey, Baba's bus will be here soon, so I am giving this toast to him. You have a little more time; I've sent Alice to get some bread and she'll be back any minute.' Shabana left the table silently.

When Alice returned I called out, 'Shabana, Shabana, come Betey, look your toast is done.' I heard her in the bathroom sobbing as though her heart would break, and rushed to her. The moment she saw me, Shabana hastily wiped away her tears and left for school.

She went to the laboratory and took some nila thotha. Mercifully, the poison had passed its sell-by date. I held my head in despair when Parna, Shabana's best friend from their kindergarten days told me that Shabana had told her, 'Mummy loves Baba more than she loves me.' 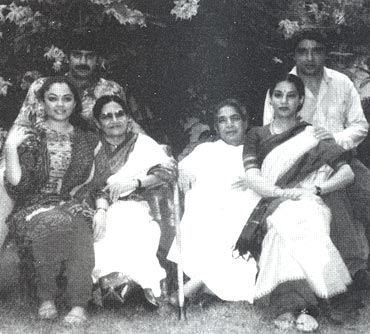 I recall another incident when I told Shabana off quite firmly, because she had been rude to me, only to discover that she had tried the throw herself in front of a train at Grant Road station. Luckily, her school's janitor happened to be standing behind her and managed to pull her back, shouting, 'Baby, Baby what are you doing?'

Shabana escaped a second time but I was most distraught and now had to think twice before telling her off. It was her hypersensitivity that also made her acutely aware of our financial constraints, and she never made the usual demands that most children make of their parents.

White plimsoles were a part of her uniform and Shabana went through a pair in three or four months. One day, I grumbled, 'Such large feet like Clodhoppers! How can I afford a new pair, every three months?'

A few days later I noticed that her shoe was ripped near the small toe, but instead of asking for a new pair Shabana had cut out a piece of cardboard and glued it on the hole. My heart went out to her and I scraped together some money and bought her a new pair. I used to give Shabana thirty paisa a day for her bus fare from Juhu to Santa Cruz station.

If she wanted a snack she saved five paisas by getting off the bus four stops earlier at Juhu Chowpatty and trudging home, but she never demanded extra money. Once again, it was from Parna that I learnt about this many years later.

Shabana was always looking for ways to earn some extra money for the house. After she had passed her Senior Cambridge in the first division, Shabana had three months before going to college. She found herself a job selling Bru Coffee at petrol stations, earning thirty rupees a day. She did not tell me, and I am afraid that I was so busy rehearsing that I did not notice her absence.

At the end of the month she handed me all the money she had earned. Surprised, I asked, 'Betey, where did you get this money from?' She made light of it and said, 'I had three months to wait before gong to college. I thought, why not put the time to some use.'

I was very proud of Shabana but I was also distraught that at this young age she felt she had to share her family's financial responsibilities.