Looking back at Bollywood in Posters 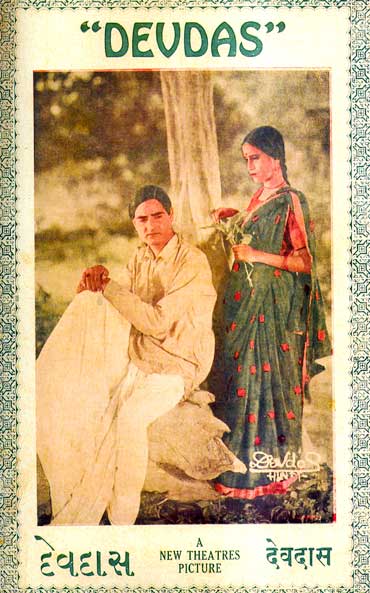 Original hand-painted movie posters have become collectors' items these days. One such collector is S M M Ausaja, who has been collecting rare handmade film posters for the past 20 years and owns about 5,000 posters today.

His book Bollywood in Posters was recently launched by Amitabh Bachchan. The book has posters, synopsis, cast and crew details and trivia.

We present excerpts from the book with the accompanying posters:

The Saratchandra Chatterjee novel was first adapted to screen in the silent film bearing the same name in 1928.
It was directed by Naresh Mitra. Then Prathmesh C Barua directed the 1935 Bengali version in which he himself played Devdas.

Barua made a Hindi version the following year, presenting K L Saigal as Devdas, Jamuna as Paro and Rajkumari as Chandramukhi.

Saigal immortalized himself with this role of an alcoholic lover, and people who patronized the film didn't like Dilip Kumar's marvelous portrayal in the 1955 adaptation by Bimal Roy.

K L Saigal's songs from the film were hugely popular across the country.

Excerpted from Bollywood in Posters (Rs 2500) by SMM Ausaja, published by Om Books International, with the publisher's permission. 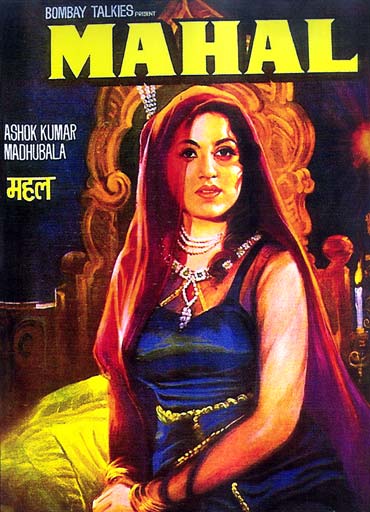 The first mystery film of Independent India that stormed the box office. It catapulted Lata Mangeshkar to top league with Khemchand Prakash's immortal composition 'Ayega aanewala...' it also boosted the career of Madhubala as a lead actress.

The film had haunting melody, gripping drama and sterling performances by Ashok Kumar and Madhubala. Its taut script and deft direction made Amrohi a formidable director in the industry.

It had choreography by Lachchu Maharaj, and a thrilling climax culminating in a court room. 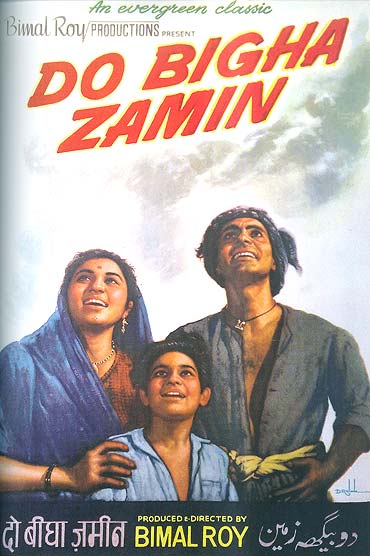 One of the few fifties' Hindi films which won critical acclaim not only at home, but also at the Cannes Film Festival, Do Bigha Zamin remains a landmark in the combined careers of director Bimal Roy and actor Balraj Sahni.

These two films catapulted him to big league in Hindi cinema, after which he is known for a series of cult films with the greatest actors on the horizon -- Devdas, Yahudi, Madhumati, Sujata and Bandini to name a few.

Do Bigha Zamin exposed the tragic indifference that the nouveau riche of semi-industrialized 50s India had for the lower class.

Balraj Sahni, as Shambhu the wronged farmer, immortalized himself with this film. He actually spent days with the Rickshaw pullers of Calcutta to prepare for the role. 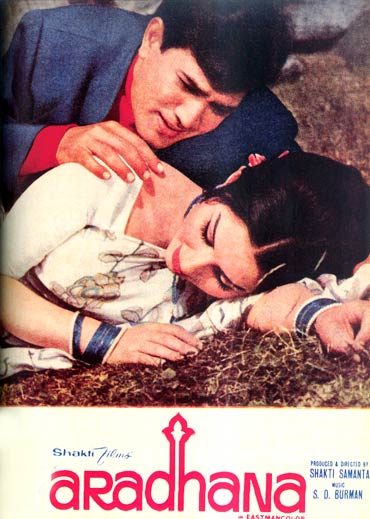 This Shakti Samanta's film heralded the arrival of a new romantic superstar on the Indian screen -- Rajesh Khanna.

The musical romance involving pre-marital sex and illegitimate pregnancy essentially followed a conventional narrative form with the hero essaying the roles of both father and son with the same face. A daring attempt.

Khanna's rise was aided by Kishore Kumar, R D Burman and a director like Samanta.

Aradhana was a romantic trendsetter in terms of music, performances and the on-screen chemistry of Khanna and Sharmila Tagore. It won three Filmfare Awards viz Best Film, Best Actress and Best Playback (Male). 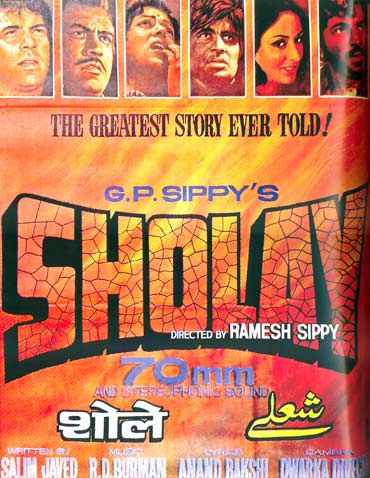 Unarguably the biggest hit of Hindi cinema, Sholay ran for not just one but multiple reason.

Amjad Khan's portrayal of Gabbar Singh became cinema history in itself, a blazing debut as a villain set a benchmark of on-screen tyranny!

Amitabh's rising stock as an 'Angry Young Man' consolidated his superstardom with this film.

When it was released at Bombay's Minerva theatre, Sholay was given mixed reviews, and was declared a dud in the first week!

As weeks progressed, the film grew in stature making critics and trade analysts eat their words! It got the distinction of becoming the first film to celebrate a silver jubilee in more than hundred theatres across the country. BBC declared it a 'Film of the Millennium' in 1999. 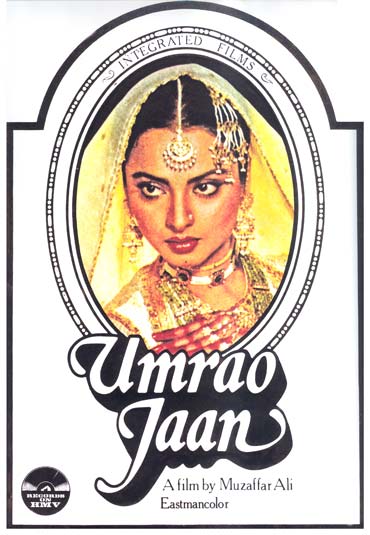 After two films, both in the year 1958, based on the same work -- Nakshab's Zindigi ya Toofaan (Nutan and Pradeep Kumar) and S M Yousuf's Mehndi (Ajit and Jaishree), Hindi cinema saw yet another adaption of Mirza Hadi 'Ruswa's novel in 1981 by director Muzaffar Ali.

With Rekha in the title-role, Al's Umrao Jaan surpassed all adaptations of the past to emerge a classic. Rekha's performance, Shahryar's poetry, Ali's vision, Khayyam's music, Parveen Bhatt's camerawork and the art direction of Bansi Chandragupta and Manzoor catapulted this film to cult status.

It's one of the few genuine films on Lucknow and its old-world charm, portrayed with authentic research showing the filmmaker's passion for his subject.

Though Rekha lost her Best Actress Filmfare Awards to Smita Patil for Chakra, she won the National Award for her performance. It is considered to be the most important film in Rekha's and playback legend Asha Bhosle's career. The film won two Filmfare Awards -- Best Director and Best Music. 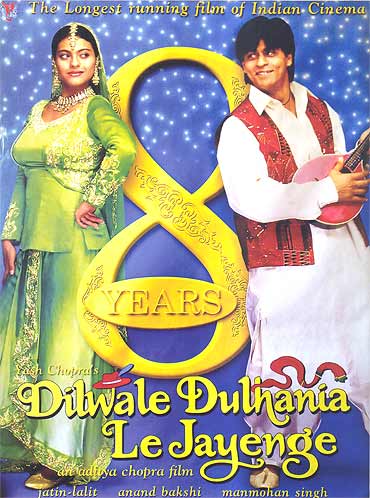 The film marked the spectacular debut of filmmaker Yash Chopra's son Aditya Chopra as director. The film smashed records to emerge as the longest running film in the history of Hindi cinema. It consolidated Shah Rukh Khan's career as the hottest teen icon.

It demonstrated sparkling chemistry between Shah Rukh and Kajol. Besides the lead pair's magic, it had an immensely popular soundtrack (Jatin-Lalit) and a brilliant performance by Amrish Puri. The dialogue and cinematography complimented the film's narrative. 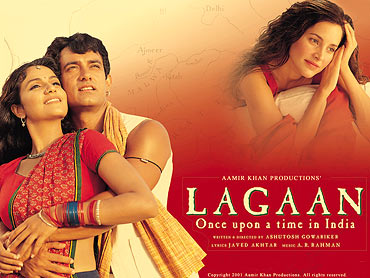 A period drama set in pre-independence India about a group of villagers resisting an unjust tax (lagan), and getting challenged for a cricket match by the local British officers, a win being essential for the waiver! 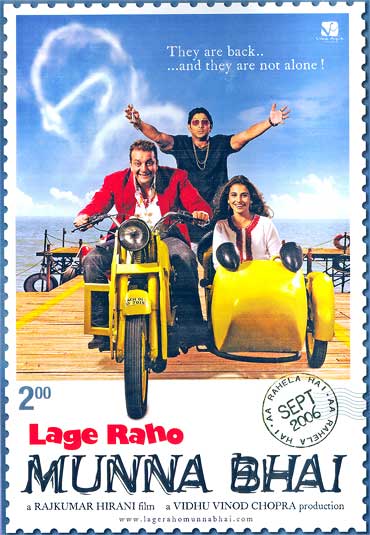 A sequel to the superhit Munna Bhai MBBS, Lage Raho Munnabhai opened with herculean expectations from the audience and critics.

Producer Vidhu Vinod Chopra and director Rajkumar Hirani managed a coup of sorts by delivering on even better film! It reinvented Gandhian values with its thrust on winning people with humility rather than violence or any negativity.

Sanjay Dutt and Arshad Warsi appeared in awesome form in terms of performances.

The film was superbly directed by Hirani and deservedly went on to become not just a hit but a classic for years to come. It won four Filmfare Awards: Best Comedian (Arshad Warsi), Best Film (Critics' Choice), Best Story and Best Dialogue. Other nominations included Best Actor, Best Villain (Boman Irani), Best Director and Best Film. It was voted Best Film of 2006 by CNN-IBN and Star Gold channels. 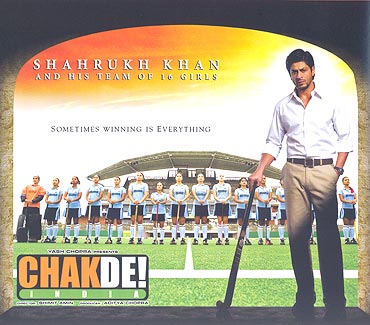 Few producers dare to venture on a subject that is devoid of romance and the usual hero-heroine storyline. A film about an aspiring all-girl hockey team ready to take on the world under a committed leader -- played wonderfully by Shah Rukh Khan -- who also had to redeem his honour in society.

The girls performed so well that it would be difficult to applaud the film without a mention of their collective contribution, particularly Chitrashi Rawat. Brilliantly scripted and ably directed, Chak De! India was a triumph for its director Shimit Amin.