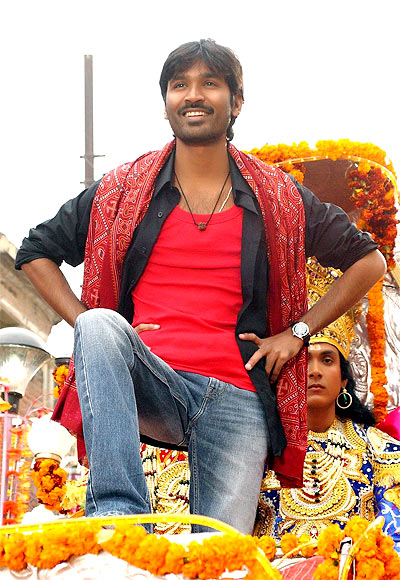 After doing 24 Tamil films in a career spanning over a decade, actor Dhanush is ready to take on Bollywood with his first Hindi film Raanjhanaa, in which he stars opposite Sonam Kapoor.

My interview with the actor was scheduled on a rainy afternoon in suburban Mumbai. Dhanush, who flew in straight from Chennai for the interview, apologised for being late.

Dressed in a plain blue shirt and denims, Dhanush looks like the quintessential guy-next-door. Though he comes across as a shy but grounded person, he is witty and has an amazing sense of humour.

In the conversation that follows, Dhanush talks to Sonil Dedhia about his Bollywood debut, why being Rajnikanth's son-in-law has not helped him, his relationship with his wife and his future plans.

You made your acting debut in 2002. Why did it take you so long to act in a Hindi film?

I've been offered Hindi films since 2008 but I kept saying no.

In the case of this film, I just followed my heart. I said to myself forget about the language, if you don't do this film then there's no point in being an actor.

Honestly, when (director) Anand L Rai first contacted me, I said no. I was doing three-four Tamil films at the time and also promoting 3 (a film directed by his wife Aishwarya, featuring the hit Kolaveri song).

Anand sir asked me to just listen to him for 15 minutes. After listening to the narration, I couldn't say no.

I really loved the character. I could see myself in it. Anand sir narrated around 40 scenes out of which around 20 scenes were similar to my real life. I instantly connected with the film.

'The only challenge was saying my dialogues in Hindi' 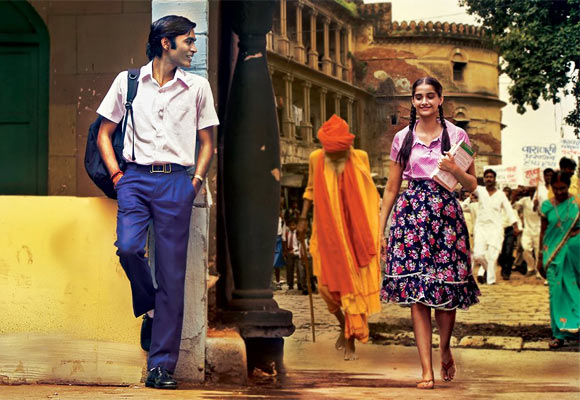 Was it challenging playing a North Indian character, given that you are from Chennai?

The only challenge was saying my dialogues in Hindi. The writer of the film, Himanshu Sharma, really helped me with the diction.

A lot of credit goes to Anand sir as he had collected all the information and had shaped my character very beautifully. He gave me ample time to prepare for it.

How much has your Hindi improved?

I am not confident yet. Give me time till my next Hindi film and I'll answer all your questions in Hindi (laughs).

How was your experience of working with Sonam Kapoor?

She is a really nice co-star. I wasn't well-versed in Hindi but she was understanding and patient. She did not laugh when I said the wrong dialogues in a funny accent. She never behaved like a superstar.
Tags: Sonam Kapoor , Himanshu Sharma , North Indian , Chennai , Hindi

'I followed a girl desperately when I was 16' 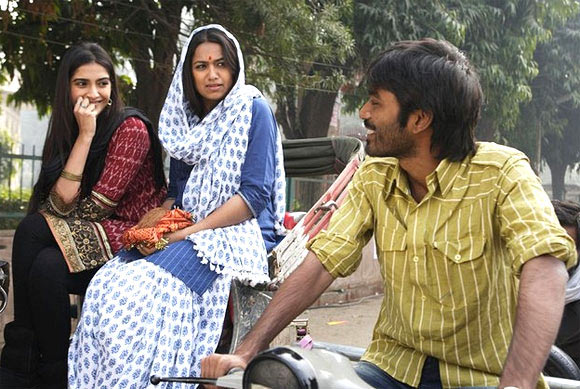 In the movie, your character desperately follows Sonam Kapoor's character. Have you ever done that in real life?

Yes, I was 16 when I fell in love. She was my first love and belonged to a different school. I followed her desperately for some months. I did everything for her that you will see my character doing in this film.

Did she accept your proposal finally?

She accepted me, but dumped me one year later (laughs).

Is this incident true or are you just making it up?

No, it's true. For me, it was true love. After she dumped me, I thought it was just high school infatuation but later I realised that I was really in love with her. 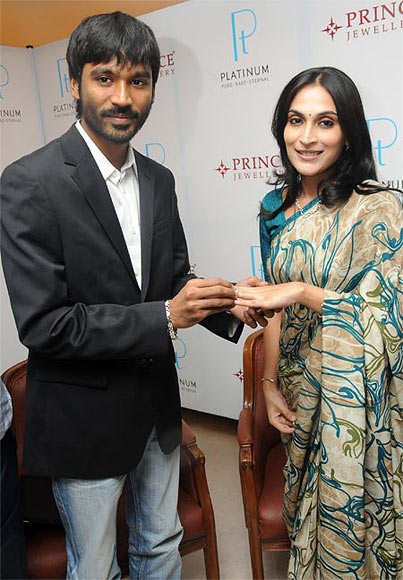 How did you meet your wife Aishwarya?

I met her when my second film Kadhal Kondaen released. I was at a theatre to check out the audience reaction. When the film ended, the theatre owner came up to me and told me that Rajinikanth Sir's daughters wanted to meet me.

Aishwarya and Soundarya were both there in his cabin. We exchanged pleasantries and they praised my work.

The next day, Aishwarya sent me a bouquet saying, 'Good work. Keep in touch'. I took it seriously (laughs). Two years later, we got married.

So it was love at first sight for Aishwarya?

Do I look like somebody with whom someone will fall in love at first sight? It is because of my talent that she liked me (laughs).

You have been married for nine years now. Has it ever affected your work?

It hasn't affected my work but I just feel bad that I cannot be there for my family as much as I want to be. I have two sons, Yatra and Linga, and I hardly spend time with them. It is very unfortunate but I have to give this kind of time to this work.

I may not be a good husband but I am trying to be a good father. Today, when I was leaving, my younger son made an angry face.

We got married too young and we are still exploring ourselves. Like any other couple, we also have good and bad times. We also have arguments but they are all healthy. We are still discovering each other.

What was Aishwarya's reaction to your doing a Hindi film?

She is yet to watch the film but right now, they are all very thrilled that I am speaking Hindi.

'Rajinikanth's name has neither helped me nor affected me' 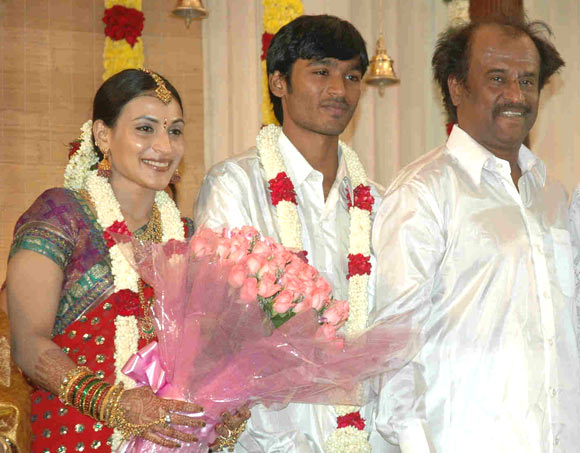 How has your father-in-law Rajinikanth reacted to Raanjhanaa?

He has been very busy with his work while I've been with mine. We haven't spoken about this film yet. I am sure he would love to see the film.

Has being Rajinikanth's son-in-law been of any help to you?

Being his son-in-law doesn't do anything to me. I have always done my own work. It (his name) neither helped me nor affected me.

You are constantly being compared to him. Does that pressure affect you?

Do you take any sort of advice from him?

No, never. I take my own decisions.

'I really want Raanjhanaa to work for my director' 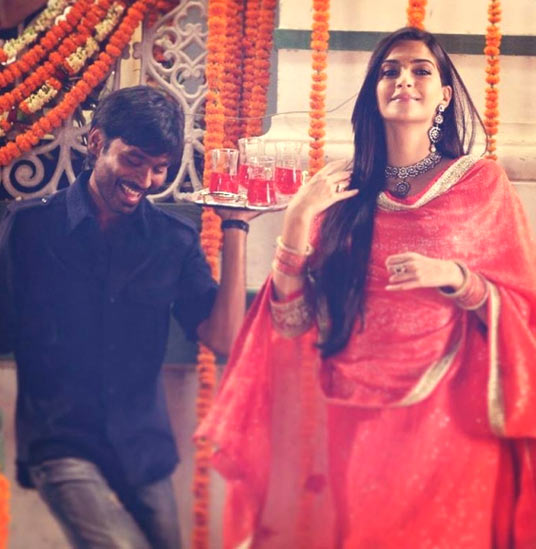 Has Raanjhanaa affected your work in Tamil cinema? There are reports of your Tamil film Maryan getting pushed back.

That's all false news. Maryan is completed and ready for release. Since Raanjhanaa is coming out on June 21, they don't know when to release the film.

Initially, when Raanjhanaa was announced, there wasn't supposed to be a Tamil version. Later the producers decided to dub the film in Tamil too. Since the dubbed version is also releasing on the same day, we are figuring out when to release Maryan. We don't want both the films to be affected.

A lot of south actors have tried their hand at Hindi films but have not been able to achieve much success. Do you think you will be able to change that?

The only thing I want is for this film to work so that my director is happy. He has shown a lot of faith in me and was adamant to cast me in the lead. He was under pressure to sign a big star but he decided to go with me. I want him to be happy.

'It's not important to make it big in Hindi films' 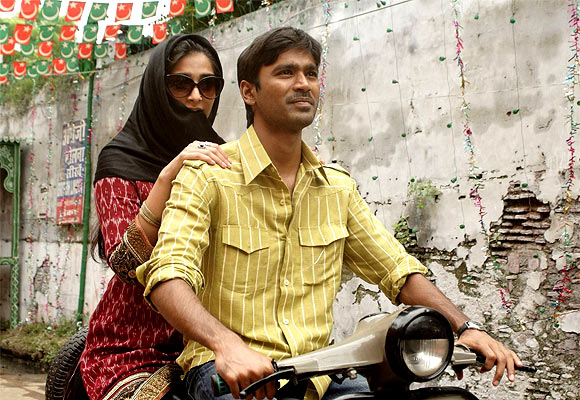 How important is it for you to make it big in Hindi films?

Is it true you have signed your next film with Anand Rai?

Yes, and I will also be co-producing the film.

I would have been a chef in a five-star hotel.