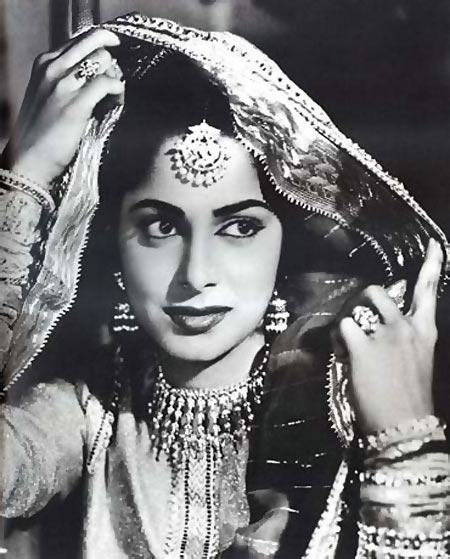 Did my heart love till now? forswear it, sight!
For I ne'er saw true beauty till this night.

I am not sure to what extent Guru Dutt or Rehman are influenced by Shakespeare but that instant yearning for Waheeda Rehman after she lifts the veil to reveal her resplendent face is classic Romeo.

Truth be told, all the poetic exaltations lyricist Shakeel Badayuni bestows in praise of her incandescent charm are not mere flattery. Rehman as Jameela is a picture of awe and adoration, a breathing goddess, a bona fide Chaudhvin Ka Chand.

But beauty, often, pays a price. Be it Snow White evoking the Evil Queen's wrath or Ann Darrow finding an unlikely admirer in King Kong. Here it triggers a commotion in the lives of best friends Aslam and Pyare Miyan.

For all its romantic fervour, Chaudhvin Ka Chand (1960) is a project stemmed out of necessity. The heartbreaking response to Kagaz Ke Phool

, one of the finest Hindi films ever made, left filmmaker Guru Dutt's production house in doldrums and in sound need of a major success. And though he may be perceived as a man of melancholic disposition, his actions render him a fighter. He decided to move on almost immediately with a period romance triangle set in Lucknow.

Getting the Nawabi flavours right 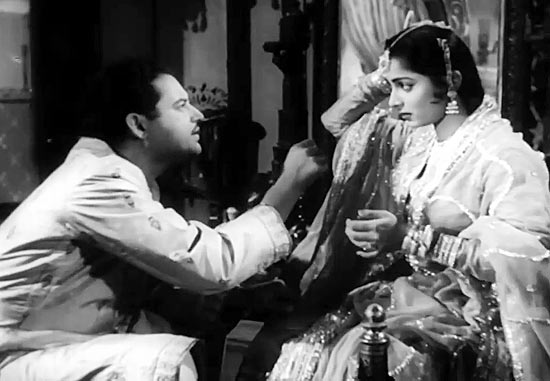 Chaudhvin Ka Chand (full moon) is essentially a Muslim social, which depicts the values and directives of a conservative society, a predominant Purdah system, the confusion and prying it leads to against the backdrop of Lucknow's indulgent Nawabs, their whims and their women.

While the subject doesn't demand the profundity of his other landmarks like Pyaasa, Kagaz Ke Phool or Sahib Biwi Aur Ghulam, it garners enough merit of its own to find a spot in the realm of classics.

And yet, he chose M Sadiq instead of himself to direct it. (He never directed a single film after the debacle of Kagaz Ke Phool.) Sadiq, who later went on to helm the 1963 Pradeep Kumar-Bina Rai hit, Taj Mahal was passing through a rough patch in his career.

In an interview to Nasreen Munni in the latter's documentary (In Search of Guru Dutt), Rehman reveals how M Sadiq was undergoing financial instability and hadn't delivered any hits but Dutt believed in his talent. Moreover, he was convinced Sadiq, being from a Muslim background, will be able to get the Nawabi flavours and etiquette of his community more aptly. 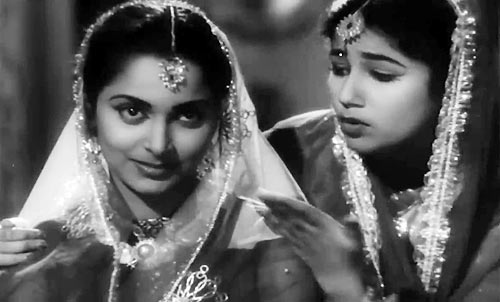 Inside these opulent kothis with ornate, enamelled pillars and grand furniture, adorning surahis and hookahs, everyone communicates in chaste Urdu and exemplifies the gait of grace clad in Bhanu Athaiya's meticulous wardrobe of delicate chikans, tulle and zardozi gararas, tanzeb kurtas and brocade sherwanis.

The curiosity to see what lies beneath the veil, however, turns many a respectable Nawabs into bumbling fools. And during one such encounter, Nawab Sahib (Rehman), fondly addressed as Pyare Miyan by friends and family, loses his heart to the beautiful Jameela (Waheeda Rehman). It's a brief glimpse but cupid's arrow has struck him hard. This tradition flourished through the decades -- from Mere Mehboob's Sadhana to Bombay's Manisha Koirala.

We get a better view of just how exquisite Jameela is when she emerges excitedly amidst bursting flower pots twirling a pair of equally radiant phool jharis (sparklers) draped in a shiny dupatta embellished with 'kamdani ke phool.' The dupatta causes its share of mix-up after the women exchange theirs with the best friends and pledge lifelong sisterhood.

Since Nawab is forbidden from entering the zenana (the ladies room) territory, he sends out Tuntun, his domestic help and confidante to find out his ladylove's identity. The only clue: the duppata. And thus begin a series of cleverly planted misunderstandings. 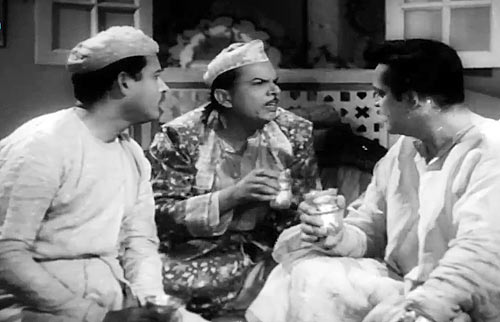 The real-life camaraderie of these friends -- Walker was Dutt's discovery while he hung out with Rehman since his Prabhat Film Company days -- is extended on celluloid too.

Pyare Miyan is most affluent and madly smitten. He's always getting beaten up in the movie. Then there's the mild-mannered orphan Aslam (Guru Dutt), also well-to-do but feels a sense of obligation towards the Nawab for all his generosity since he was a kid.

And finally there's Johnny Walker's Shaida, a mischievous scamp who is thoroughly afraid of his battering father much to the amusement of his baby sister. His sub plot builds along the way but serves little except to provide comic relief from the ensuing melodrama.

In a turn of events, Pyare unwittingly persuades Aslam to marry Jameela. Elaborate wedding festivities, blustering shehnais and flower-covered dolis mark the event as the merriment cuts to a dawdling dulhan welcomed into her new home with curious kids and relatives surrounding her at every step. 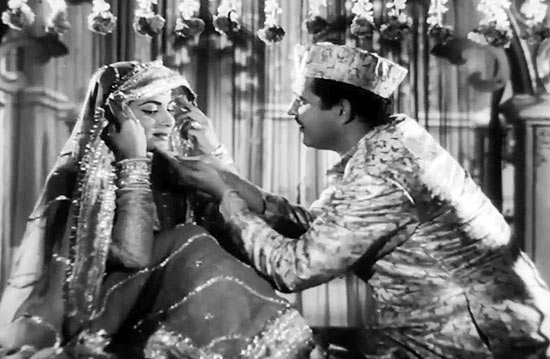 Their wedding night scene is laced with endearing humour (when Aslam frightens a veiled Jameela about his ugly appearance till she lifts her ghoongat to confirm) that loosens both up promising the beginning of genuine affection.

During its infinitely melodious title song, Waheeda Rehman and Guru Dutt's remarkable chemistry takes a life of its own and cinematographer (and also the producer of the 1978 cult classic, Don) Nariman Irani's passionate close-ups of the two suggest more intimacy than actual touch.

After the film celebrated its silver jubilee, Dutt re-release the film with two songs in colour. He re-shot Chaudhvin Ka Chand and the mujra Dil Ki Kahani picturised on Minoo Mumtaz entirely, only this time his favourite V K Murthy (to whom Irani was first assistant) stepped in to do his magic.

Apparently the censors found the Technicolor-treated version a tad too sensual for their liking. And while their censure is debatable, the observation isn't. When compared to the bashful Jameela of black and white, the ruby-lipped Rehman indeed looks far more confident and conscious of the effect she has on her man. 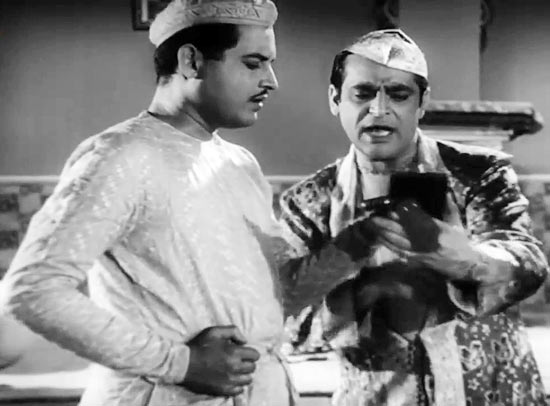 Things get complicated once Aslam finds out the object of Pyare's obsession is none other than his wife. The revelation is handled quite elegantly. Instead of blaring violins and out of the blue lightening, a visibly distraught Aslam just stands still clenching tightly his crisp kurta.

This is the part where Dutt shines and takes the script to another level. His reaction is restrained yet emotional. At the same time, he appears somewhat amused as if destiny has played a practical joke on their lives. As in any bad news, this too takes a little time to sink in.

And when it truly hits him, the mood becomes distinctly stark and theatrical leading to another gem from Mohammad Rafi --Mili khaak mein mohabbat with a lone Aslam lamenting his fate in the surrounding of ruins.

Even if Chaudhvin Ka Chand is designed as a crowd-pleasing entertainer, Ravi's eclectic soundtrack isn't there for the heck of it. Songs are a crucial part of the narrative. (The film won three Filmfare Awards for Best lyrics (Badayuni), Male playback singer (Rafi) and Art Direction (Biren Nag)).

Like when Aslam enters self-destruction mode and pretends to be debauched to discredit himself in Jameela's eyes, the torment his actions cause her are beautifully articulated in Badle badle mere sarkar. Irani's play of diffusers lends Rehman's glistening tears the sheen of a diamond.

It's not hard to see why everyone would be so besotted by the lady. It's impossible to look away from the screen when she's there. Though much junior, the Guru Dutt discovery gets top billing in the opening credits but more than lives up to this privilege. 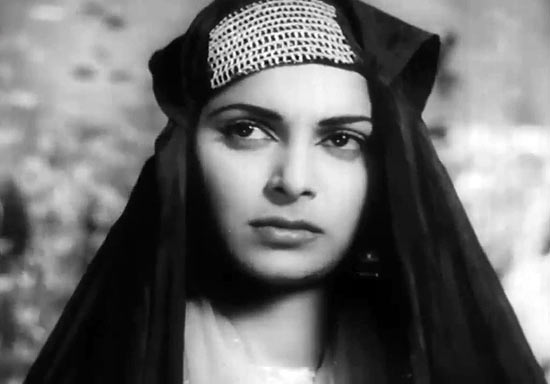 Among her co-stars Guru Dutt, I reiterate, gets under the skin of a sensitive individual caught in a bizarre tug of loyalty to his friend and commitment to his love.

As the spoilt, self-seeking, exasperatingly ignorant Nawab preoccupied with superficial appeal, Rehman fails to create any sympathy for himself.

Quite early in the film, Jameela makes fun of his appearance describing his nose as a 'jalli hui roti pe bhuna hua baingan.' It's quite a nasty visual and Rehman does nothing to erase it. His personality, better-suited for sly characters, lacks the boyishness or vulnerability to pull off the love struck Pyare Miyan.

But the only discordant note is concealed within the enormous pile of pleasurable elements in Chaudvin Ka Chand. 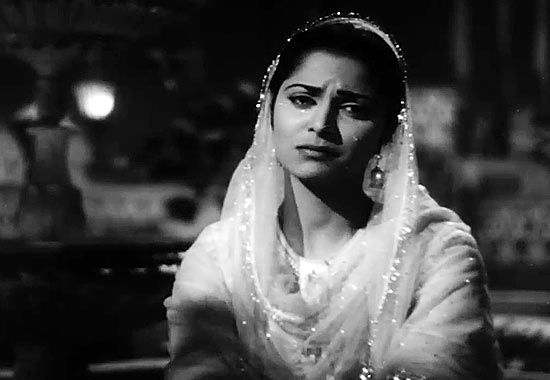 Love triangles are rarely ever fair on women.

Either she is subject to suspicion and scrutiny over her character or easily dispensable/sacrificed to be with another. In Chaudhvin Ka Chand too, there comes a point when Aslam initiates a situation for divorce and a desperate Jameela rebukes her concerned family for interfering, demeaning herself as her husband's kaneez/laundi (maid/mistress) so much so that a disgraced Aslam hangs his head in shame.

It not only mirrors a male chauvinistic society and routine regression but a complete breakdown of a wife and woman's pride.

But in the era Chaudhvin Ka Chand belongs to, a Cocktail kind of 'You love me. I love her. She loves me back' admission is unheard of.

Some scenes enrage you not only because a woman's future is dependent on her husband's goodwill and can easily become putty in his hands if otherwise but because even after all these years, the scenario remains unchanged in certain sections of society.

But being a Guru Dutt film, this disparity is not an endorsement but a means to underscores the decay in man's mentality. Unfortunately, very few subsequent films of this genre, including the Rishi Kapoor-Jeetendra-Tina Munim starrer Deedar-E-Yaar, which is amply inspired by Chaudhvin Ka Chand truly understood the significance of social critique. 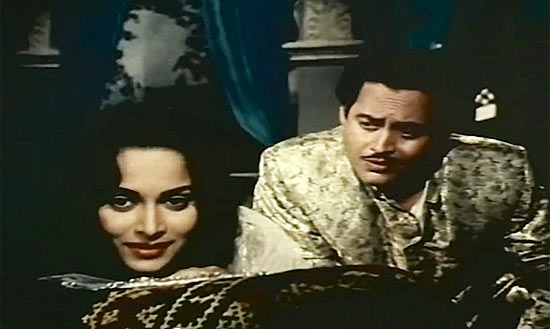 Besides influencing a whole new generation of love triangles, some of this romance drama's most strategic scenes find resonance in films that came out much later.

Like the one where Guru Dutt gets lyrical on discovering his lovely wife napping on the terrace on a full moon night. You'll see similar imagery in the song Woh chand jaisi ladki from Sanjay Leela Bhansali's Devdas featuring Shah Rukh Khan and Aishwarya Rai.

The tragic climax involving death by a diamond is replicated in Muqaddar Ka Sikander wherein Rekha takes her life while Amitabh Bachchan furiously begs her to open the door.