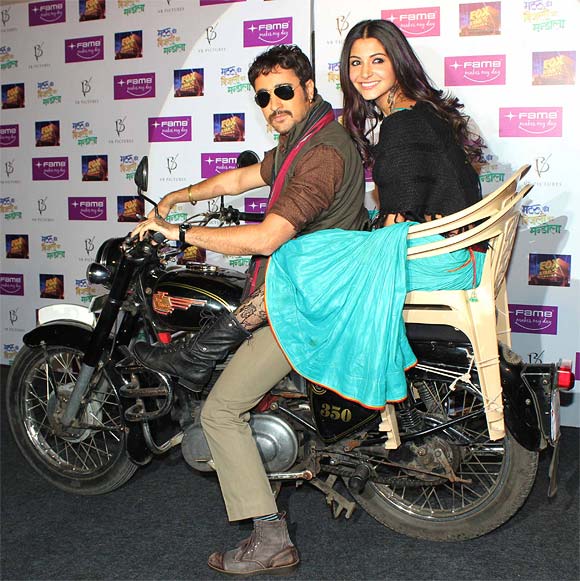 Imran Khan and Anushka Sharma made a grand entry into the trailer launch of their new film together Matru Ki Bijlee Ka Mandola -- he rode on a motor bike, with Anushka sitting pillion, on two plastic chairs.

"My role here is different from what I have done earlier," Imran told the media assembled. "During the first script reading, I was unable to deliver dialogues in Haryanvi. It was not easy at all. I felt I made a mistake by agreeing to do this film, so I told Vishal I wouldn't be able to do it. But he convinced me. He had faith in me when I did not."

Talking about Imran's rustic look in the film, Vishal said, "I wanted to see Matru in Imran. I had liked his look in Delhi Belly but I wanted more. We did several tests on his appearance and finally got him in this overgrown beard. I even thought of making him go bald. He was very patient with me and we finally achieved the look."

Bhardwaj: The pink buffalo is an item girl

Vishal claimed his personal experiences in his college days made him understand the characters better, and get the best out of his actors. "I have a lot of friends, who are similar to the characters in my film. Mandola's character (played by Pankaj Kapur) has been inspired from one of the characters in Charlie Chaplin's film City Lights."

A pink buffalo, spotted in the trailer, is also a special character in the film.

"We needed an item girl and I thought the best item girl would be a pink buffalo," Vishal laughs.

Imran: Aamir told me to stay in Haryana for six months 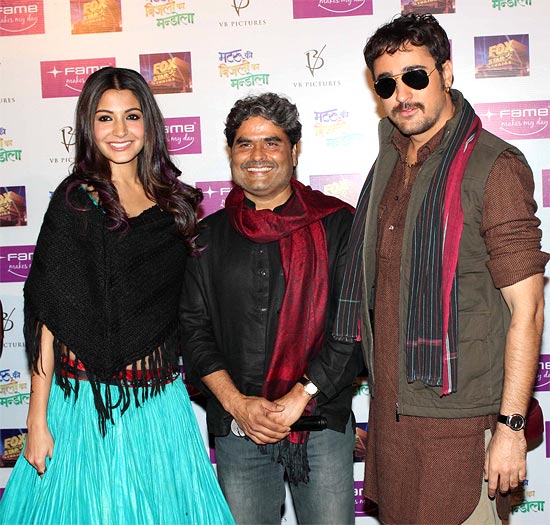 Imran has often taken career advice from his mama Aamir Khan, and did so once again for this film.

"Aamir told me to stay in Haryana for six months, so that I get things right but it was not feasible. During the shoot of Jaane Tu... Yaa Jaane Naa, he suggested that I travel across India in a bus for a year. It was (director) Abbas Tyrewala who said this would not be possible as we had to start shooting."

Imran and Anushka have been paired opposite each other for the first time in Matru Ki Bijlee Ka Mandola.

"I never thought we would look like this and do a film like this," Anushka says. "But Imran has looked the hottest ever in the film."