10 Best Bollywood Movies of the Decade 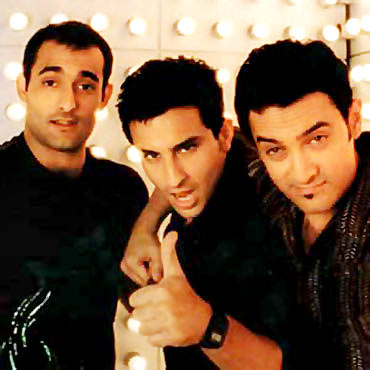 As it turns out picking the good apples from the bad ones is a lot harder than it looks.

After a lengthy discussion and debate on the best films that emerged from the past decade with my friend, a prolific movie enthusiast and comic art collector, Satyajit Chetri, I made up my mind to make this list as probable as possible with a few ties, now and then, but some notable albeit unavoidable omissions too.

Of the many joys of list-making, cheering holds higher ground over booing any day. So here's a year-wise toast to the most groundbreaking films that hit the screens between 2001 and 2010.

Its influence is undeniable and obvious in the hip romantic comedies to come out in recent years but nothing quite like the original. 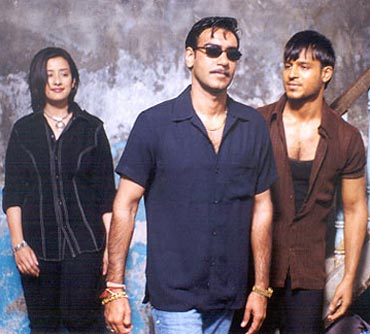 Image: A scene from Company

Inevitable comparisons to Satya aside, Ram Gopal Varma's technically sleeker Company never tries to be too personal like his previous iconic take on the underworld.

Instead it carves its own niche by investigating the sly networking and rivalry within the murky mafia biz through its two charismatic gangsters played by a fine-tuned, brooding Ajay Devgn and raw, volatile Vivek Oberoi.

The upshot is at once inspiring and memorable. 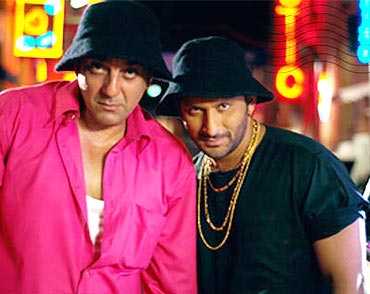 Image: A scene from Munnabhai MBBS

Feel-good quotient in movies is either contrived or excessive. Only a few like the Munnabhai series strike a right note.

Bless the lord for giving us two of those in a quick span of one decade. Director Rajkumar Hirani and his blend of meaningful entertainment, along the lines of Hrishikesh Mukherjee, give us ample to smile about through its golden-hearted tapori, Munna, his steady side-kick Circuit and their hilarious adventures in the bid to do well.

If Munnabhai MBBS takes a lighthearted dig at the impersonal attitude of medical practitioners, its ambitious and outstanding follow-up Lage Raho Munnabhai (2006) takes pride in the values of Gandhigiri.

Let's club the twain as one big film and render it a well-deserved pat on the back or maybe a giant jadoo ki jhappi? 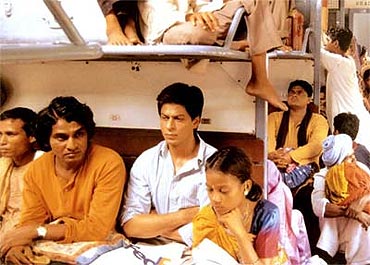 Image: A scene from Swades

The greatest achievement for any actor is to lose himself in a role. The greatest acknowledgement of his efforts is to see him as that role.

That's one of the reasons why Shah Rukh Khan's work as Mohan Bhargav is deemed his best so far.

What makes Mohan and Swades, so lovingly crafted by one of the most earnest (at times too earnest) filmmaker of our times -- Ashutosh Gowariker, special is the innate simplicity, idealism and strength of character they lend to each other and the overall optimism in its story without an iota of compromise.

Of course, there's A R Rahman making it all the more genuine with his exquisite background score. 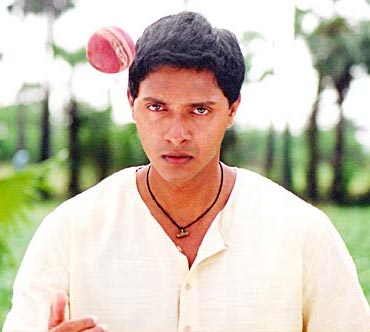 Image: A scene from Iqbal

And it's not just because its leading protagonist is handicapped by physical limitations. This is Nagesh Kukunoor film and devoid of sentimental manipulation.

Rather the sheer resilience, good-natured humour and will to conquer all odds in Iqbal, essayed by a remarkable Shreyas Talpade, makes this is a delightful tale about triumph of spirit. 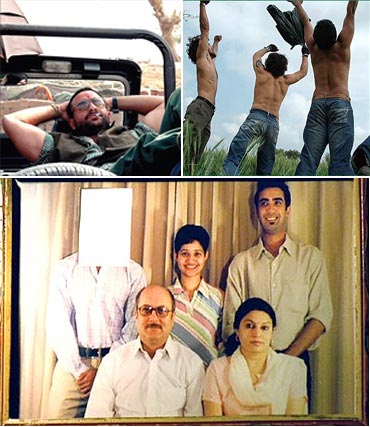 It's tie-time, folks. Come on, there's a whole lot to choose from in the treasure trove called 2006.

It's sacrilegious to pick ONLY one. Let's see, Lage Raho Munnabhai's already sitting pretty with MBBS. There's no way Omkara is getting a slip. Ditto for Rang De Basanti.

It's important we make space for Dibakar Banerjee's wittily-penned debut, Khosla Ka Ghosla. After all it paved the path for spunky, smaller-budget films like Do Dooni Chaar and Band Baaja Baaraat showcasing Delhi's mercurial, middle-class flavours.

Coming back to Omkara, a flawless depiction of flawed personalities, Vishal Bhardwaj's breathtaking reworking of Shakespeare's Othello leaves behind a souvenir of unsuppressed awe. The man weaves the fragility of human fabric and its fallacies against the contrasting shades of a coarse, caustic tongue with such inspiring assurance, all you do is sit back and gasp at the man's genius.

There's much to admire and appreciate in Rakeysh Omprakash Mehra's fierce and furious Rang De Basanti. In this marvelously shot and layered story that moves back and forth between a bunch of campus blokes and the historical figures they eventually emulate, Mehra underscores the urgency for youth activism in the face of overbearing corruption. His methods are controversial but they sure get the point across. 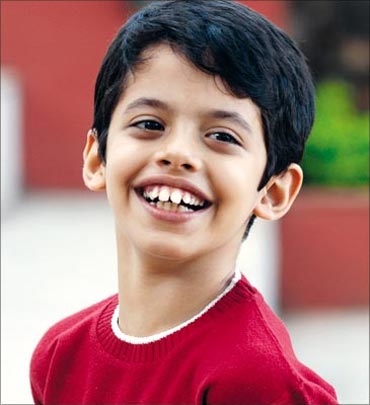 There's something irresistible about films in which you see yourself.

While for some Taare Zameen Par is an intricate study in the struggles of a dyslexic school boy, to many of us it's revisiting a childhood one's lived through at some point or the other.

But because it is played with such disarming ardour and astonishing sensitivity by Darsheel Safary, a gifted natural with a winning smile, this realisation is all the more heartrending.

To director Aamir Khan's credit, he articulates the complexities within Amol Gupte's perceptive script by leaving Safary's wonderment and disillusionment to do all the talking and us all the crying. 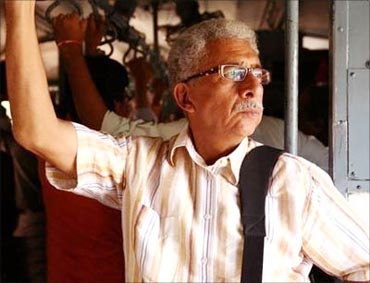 Image: A scene from A Wednesday

Every dialogue in Neeraj Pandey's A Wednesday packs in a punch, a whistle and a sock in the face of all those who think it's a hero type's prerogative to do all the gallant stuff.

The film's heartening success reiterates this further. The script's wry sarcasm and relevant scenario engage its supremely talented leads -- Naseeruddin Shah and Anupam Kher in an absorbing game of hide and seek through a series of niftily executed thrilling sequences.

An intelligent action film, sans the dishoom dishoom, A Wednesday is gripping from start to finish. 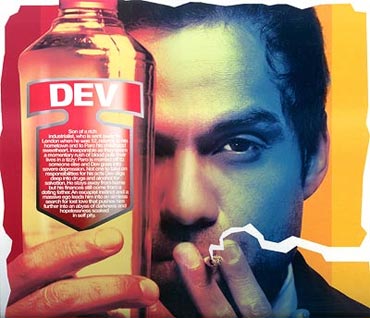 Image: A scene from Dev D

No film prior to Anurag Kashyap's Dev D has dared to do this to literature.

In place of conventional homage, Kashyap, following a suggestion by the film's leading Abhay Deol, grabs a celebrated classic (Sarat Chandra Chattopadhyay's Devdas) that's already been remade to death with intensity and opulence, only to reconstruct it into something contemporary, radical and irreverent, it's rather fabulous. 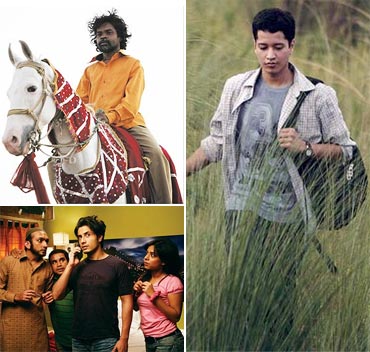 If 2006 had all the nicely done biggies, 2010 rode high on the strength of low-budget flicks. Again, it's impossible to pick one out of so many exceptional films. And so it's a tie.

Anusha Rizvi shows off her skills in Peepi [Live], a colourful, ironic and authentic commentary on the state of affairs in rural India as well the clownish portrayal of Breaking News-driven electronic media. Compelling performances by its theatre-sourced cast, Indian Ocean's rousing beats are among its other pluses.

Vikramaditya Motwane's Udaan is soulful and stirring. It sees the world through a teenager's eyes and angst reminding us what it's like to be seen but not heard through its young protagonist's ethereal poetry. At the same time, it wears a nasty side in the garb of (an electrifying) Ronit Roy's unrelenting father. A valiant first-time effort by Motwane.

And more power to Tere Bin Laden's Abhishek Sharma. Imagine how ridiculous the whole idea, of roping in an Osama Bin Laden lookalike to record fake videos in order to garner an entry in US by an eager Pakistani journalist, must have sounded on paper. Sharma employs this very audacity to create some of the most effortless laugh out loud moments in a long, long time.