Sushil Kumar, 28, has become the first contestant to win the prize money of Rs 5 crores on Kaun Banega Crorepati Season 5.
Kumar, who got married recently, is a computer operator and a part-time tutor in Bihar. The episode will be aired on Sony Entertainment Television on November 2.

Rajul Hegde spoke to Sushil Kumar, and asked him just how ecstatic he was.

Do your family and friends know you have won Rs 5 crores?

After watching the promos on television, I have been getting calls from friends and relatives. People have been coming to me to shake my hand whenever I have stepped out in Mumbai.  I always wished to see my name in newspapers. It's a dream come true. 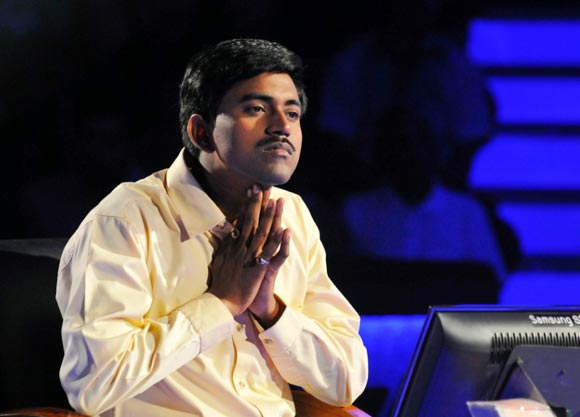 What kind of preparations did you make before you went on the show?

I didn't prepare much because I had an idea of what would be asked. I did some preparation with whatever books I had.

Do you watch KBC regularly?

I used to watch KBC at my neighbour's place for many years when we did not own a television. I have been watching KBC for the past 11 years and I would get the answers right most of the time, till the level of Rs 50 lakh. So I was confident that I would at least win Rs 50 lakh. But I never expected even in my wildest dream that I would win Rs 5 crores.

Is this your first attempt to come on KBC?

No. This is my second attempt. I had tried my luck in the previous season but couldn't make it. This attempt was worth it because it not only made me sit on the hot seat but also changed my life completely.

'Amitabh Bachchanji made me comfortable and calmed me down' 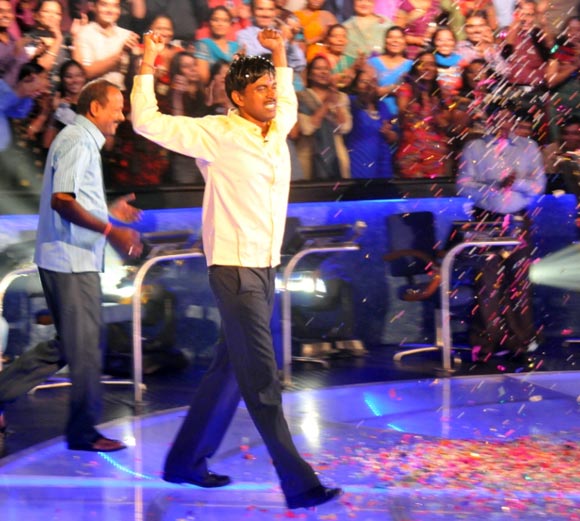 On October 17, I got a call to participate in the show. It was shot on October 24.

It was a very big thing for me to meet Amitabh Bachchan. I used to see him on the television. When I came here, I touched his feet because I was not sure if I would be able to reach this stage, since Fastest Finger First is very tough and there is no guarantee if one can play the game even if he is knowledgeable.

So, I hugged him. I think that was one of the biggest achievements for me. I was quite nervous when I made it to the hot seat. But it vanished completely because Amitabh  Bachchanji made me comfortable and calmed me down. I wore shoes for the second time in my life when I shot for the episode.

The happiness is difficult to describe in words. I am still to come to terms with the fact that I have made history.

'The next five minutes I went blank' 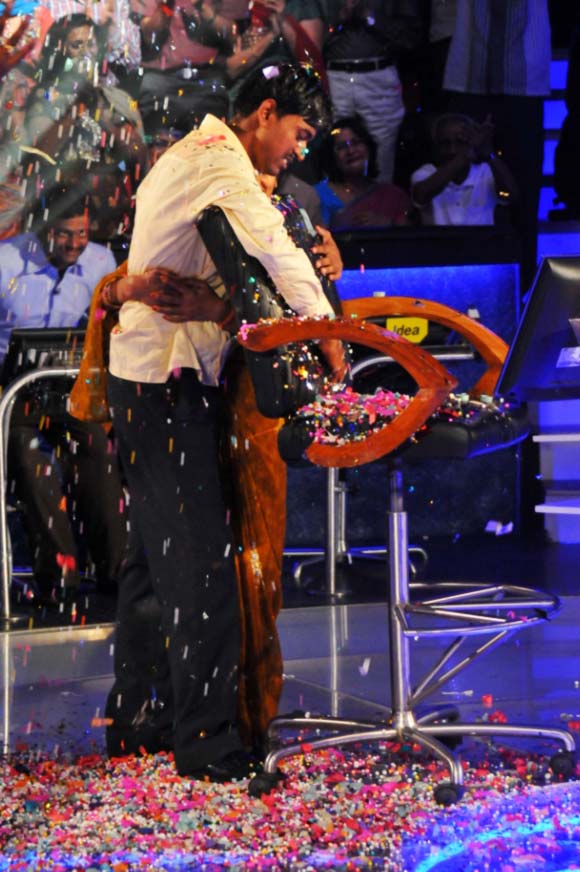 What was the jackpot question?

I have been told not to speak before the telecast on November 2. I had saved two life lines: Double Dip and Phone A Friend. The jackpot question was linked to my civil service question so I was confident but still used the life lines to reconfirm the answer.

What was your reaction when Amitabh Bachchan announced that you have won Rs 5 crores?

First, I screamed loudly! The next five minutes I went blank. I don't remember what I did in my happiness. I will come to know only after I watch the episode.

'I want to become an IAS officer'

How much will this prize money change your life?

I have done a Masters in psychology. I wanted to appear for the civil services examination but the financial crunch didn't let me pursue my dreams. I got a job where I could earn Rs 6, 000 per month and was satisfied with it.

Now I have enough money to help my family and fulfill my dreams. I want to build a new house. Then I want to help my younger brother who is working with a garment shop and earns only Rs 1, 500 per month. I would help him to start a new business. I want my elder brother to get a new shop.

I plan to go to Delhi to prepare for the civil exams; I want to become an IAS officer.

I will save the rest of the money.

Did you speak to your family?

Yes. It's a double celebration this Diwali for everybody in my house in Motihari (150 km from Patna). People are coming to my house to congratulate my family. I will go home after the telecast.