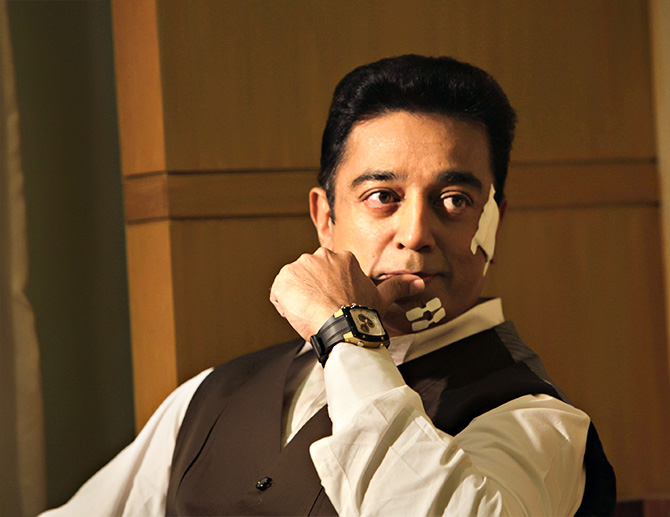 Vishwaroop 2 is a motion picture conceived almost entirely inside Kamal Haasan's bedroom without him even bothering to take a walk outside.

An auteur, who is 'half-made,' is only as good as a politician and Vishwaroop 2, eerily enough, feels like a movie made by a politician -- with one-upmanship, quick fixes, and self-memorialisation aplenty.

Vishwaroop, the predecessor, was for those, who are easily swayed by films that make a show of their artistic intentions. (With all its neat contradictions, people with exaggerated job titles, and violence that de-sensitises you to violence).

Vishwaroop was a standard spy thriller that, in its own head, was a 'Geopolitical Thriller.'

Vishwaroop 2, on the other hand, earns its unique descriptor -- it must be the slowest spy thriller ever made.

This is a film where random storylines are padded together with obscure Internet facts -- all so that the narrative can somehow limp over to a denouement whose function is to make effective use of Rahul Bose's and Jaideep Ahlawat's limited dates (Bose and Ahlawat reprise their roles as Al Qaeda terrorists, Omar and Salim).

This is a movie that merely wants to complete the formality of a sequel.

And so the mind reels: Why would a true giant of the silver-screen ('The silver-screen? Oh, it's a great place to die,' Haasan had once said in an interview) bid goodbye to it with a mere formality?

Maybe, because giants do love tragedies.

Back to Vishwaroop 2, whose first half cuts between London and Afghanistan -- with Haasan's Wisam thinking back to footage from Vishwaroop or stuff in the prequel that were chopped off at the editing table.

There are majorly six 'types' in the London section.

There's, of course, Kamal Haasan the Great, who if he is ever not great, that's only because he has bigger plans at hand.

There's Shekhar Kapoor as Colonel Jagannath, whose shake of the head and blank sighs are meant to underscore the Cold Bureaucracy, which is now a staple of espionage thrillers (in these movies, anyone with the slightest hint of anything like a heart, by default, becomes the lead character).

There's Jagannath's boss, played by Rajendra Gupta, the brief to whom was perhaps to utter the term 'Collateral Damage' at least once in every three sentences.

To Gupta's credit, he does this awfully well!

There's Anant Mahadevan as Rajesh Mehta, who is essentially what his uncle character in Khiladi might have been if he was openly evil, clean shaven, and working in the top rungs of the government (As far as spy movies go, I have now stopped caring about who is occupying which chair).

The women are tailored to be Kamal Haasan's Angels: Bright and yet a few IQ points slower than Haasan; sexy and yet weak to Haasan's charms; arrogant but eventually tamed by Haasan's verbal whip.

Andrea Jeremiah is the long-legged Ashmita Subramaniam, playing the spy-version of the oversmart kid in class.

Jeremiah, however, is a fine actress, and she pulls off the caricature pretty well: Impressive when being catty with Nirupama while silently being concerned about her; or when teasingly offering Tylenol to a diarrhea-stricken Anant Mahadevan.

As with most of Haasan's works, the characters here too, constantly take loo breaks or talk about their stomach ailments -- it's as if, the rhythms of everyday life is now available to Haasan only in the form of scatological solos.

Even Haasan's prime villain, Omar (played by Rahul Bose), looks and sounds like the model for a laxative commercial -- albeit with a cesium fetish.

And the movie eventually does come to down to Haasan slugging it out with Bose and Ahlawat in Delhi.

Ahlawat's Salim kidnaps the girls whereupon Haasan's Wisam reaches Omar's den -- whereupon Omar informs him about his plans to blow up the city.

None of this makes for good, tense drama, but does offer you clues into Kamal Haasan's life as a child of the silver screen.

Look carefully and Vishwaroop will seem to you as Haasan's tribute to himself: You will see in it a collection of his own photographs and his efforts to bring to the screen his personal fantasy of playing a globetrotting spy!

There's an unmistakable agility, still, when he performs the action sequences.

Like a child obsessed with the screen and its star players, he writes a part specifically for Waheeda Rehman and a scene with her turns out to be one of the only interesting scenes in the film -- where Rehman as Wisam's Alzheimer-afflicted mother is introduced to her daughter-in-law whom she welcomes, but cannot recognise her own son who stands beside the new family member.

The above sequence is a moment of minor writing glory, but it's when Vishwaroop 2 tries to show off its 'directorial flourishes' that it betrays its vacuity.

There's a terribly shot scene of lovemaking which is present purely to make you aware of the film's artistic intentions. And all it does is tell you how out of touch Kamal Haasan is.

But, but, Vishwaroop 2, as I said, is Haasan's show and he has mounted it for himself.

In a passing scene, where Pooja Kumar's Nirupama wonders about how Wisam managed to trick her, Haasan says, 'Maybe, it's because I am a good actor.'

In another scene, he lets Andre Jeremiah's Ashmita refer to him as 'Heavy Breather.'

Perhaps, he's bowing out with a wink.

And that has its own charm.

But the casualties of this self-memorialisation process cannot be overlooked: They include art without a definite philosophy, and characters without any Free Will.

Toward the end of Vishwaroop 2, Nirupama says to Salim who is celebrating his own evilness, 'God will punish you, dekhna.'

And no sooner does she complete that sentence, than Kamal Haasan flies in through the window and in three swift motions, dispenses justice.

'God is here!' Haasan seems to be saying.

And he now wants your support.