'As much as I appreciate this seamless show of computer graphics -- the gobsmacking detailing of its manufactured wildlife and landscapes -- there's something awkward about its authenticity.'
'Neither does it match the vigour of The Lion King's dramatic plot,' says Sukanya Verma. 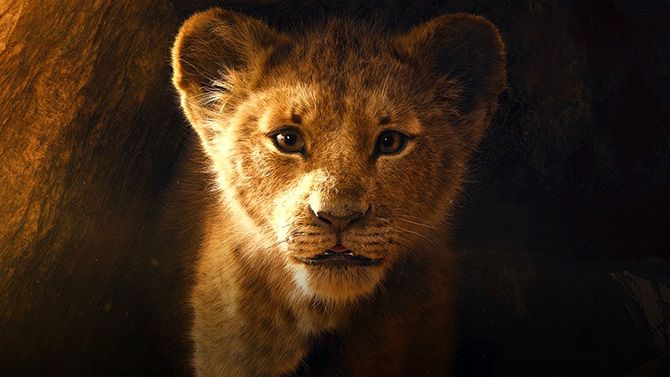 One of the momentous father-son stories to come out of Disney's dream factory, back when emotion was valued as much as economics, The Lion King's Shakespearean soul and spectacular animation spoke to viewers across all ages.

When I first saw it 25 years ago, I was awestruck by its refusal to paint death, pain or guilt in candy-coloured hues.

Mufasa wasn't placed in some fancy, gold-rimmed glass coffin and no amount of love from Sarabi's side or remorse from Simba's would bring him back to life.

No Fairy Godmother would Bibbidi-Bobbidi-Boo her wand at Scar and turn Simba into King.

The Lion King's fable-like tone, reminiscent of Bambi and The Fox and the Hound, resists hocus-pocus even if its characters burst into vibrant song and dance or contradict their fundamental nature.

Its photorealistic computer animated remake -- in the on-going tradition of Disney reboots cashing in the good will of its stockpile of beloved classics -- directed by Jon Favreau lacks, as Mufasa would say, the 'delicate balance' between technological advancement and contemporary relevance to feel worthwhile.

Unlike Maleficent, The Jungle Book or Aladdin, which subverted some of the original's context to appear more topical, The Lion King remains faithful to what is tried and tested.

All its distinction is by way of visuals and voice acting.

As much as I appreciate this seamless show of computer graphics -- the gobsmacking detailing of its manufactured wildlife and landscapes -- there's something awkward about its authenticity. Neither does it match the vigour of The Lion King's dramatic plot.

The 1994 film whipped up a burst of colours and choreography, scenes full of Savannah sunsets and starlit nights, cheerful display of flora and fauna, Hakuna Matata and Circle of Life. In a nutshell, 88 minutes of subtle spiritual and breathtaking poetry.

Favreau's depiction of Pride Land -- or Gaurav Bhoomi, if you are watching a Hindi dub like me -- features all these scenes and yet none of their spirit.

It's a grim scenario worsened behind 3D glasses.

For those coming in 25 years late, here's a recap.

A king is deceitfully murdered by his wily brother so that he can reign over and blames it on his baby nephew.

The nephew runs away and grows up around carefree company until his father's spirit prods him to fight his uncle and take back his rightful place as king.

What is the law of the jungle holds true of Bollywood too. And it couldn't be more emphatic than Shah Rukh Khan using his gift of eloquence to play Mufasa while son Aryan makes his voice debut as Simba.

Perhaps a little too austere, as though conscious it is James Earl Jones's larynx he's filling in. Occasionally Bollywood too, when his trademark quavering sneaks in and he calls out Simba in the same panicky papa tone as he once did to Anjali.

Aryan sounds a bit like his father but there's more rhythm and mood to his rendition.

He gets the medium and does well.

Ashish Vidyarthi's cunning Scar appears to be enjoying the gig.

As do Sanjay Mishra and Shreyas Talpade whose warthog Pumba and meerkat Timon converse like Mumbaiya taporis. It's not one bit funny.

Neha Gargava's Nala and Shernaz Patel's Sarabi do not leave an impression.

The hyena troika spearheaded by Shenzi (a terrifyingly screechy Achint Kaur) fire hostilities in a Bihari accent. The hyena intimidation might be a bit daunting for younger kids.

But the real star of the show is Asrani's gusto as Zazu, the red-billed hornbill. His sprightly articulations and well-timed wit, as he hat tips a certain Angrezon ke zamane ka jailor and Yamraj's deputy, are a hoot.

If only the studio had focused on better writing too.

The translation is often hopeless and ruthless in butchering the humour and dumbing down the wisdom.

Watch it if you are curious about seeing a photorealistic take of a treasured tale or maiden attempt of a star son who 'just can't wait to be king'. 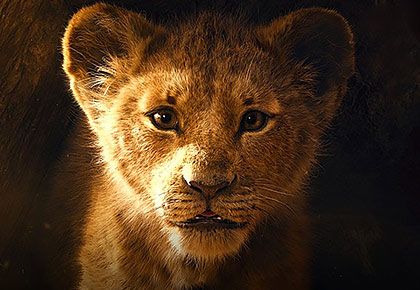