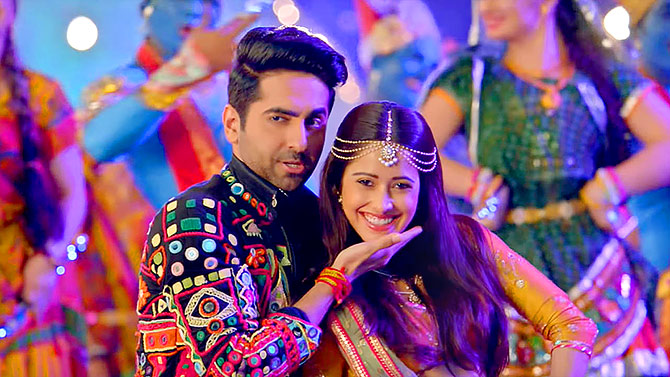 Men falling for men masquerading as women is an old gag.

Rishi Kapoor and Paintal’s girly avatars in Rafoo Chakkar, a cheerful rehash of Hollywood’s Some Like it Hot, attracts both male and female attention.

Amrish Puri in Chachi 420 shaves off his prized moustache to woo son-in-law Kamal Haasan posing as his granddaughter’s elderly nanny.

Govinda’s good deed turns on its head when his role playing in and as Aunty No 1 evokes cupid in Kader Khan and Saeed Jaffrey.

Deepak Tijori in a dress sparks off his college coach Tinnu Anand’s inappropriate dreams in Khiladi whereas Apna Sapna Money Money’s Anupam Kher forgoes his orthodox ways after he becomes sweet on Riteish Deshmukh in drag.

In Dream Girl too, admirers throng for the attention of a friendly voice on the telephone, aka ‘Pooja speaking’.

The coquettish female voice belongs to Karam (Ayushmann Khurrana), a desperate dude prepared to crochet peacocks on sweaters for a living if need be.

Yet, we have reason to believe that it’s not just the dearth of jobs in small-town Mathura or an outstanding loan that persuades him to join a shady friendship call centre -- an enclosed chamber lined with pink-walled cubicles occupied by sari-clad aunties chatting up oversexed strangers while knitting and chopping vegetables.

A good deal of writer and debutant director Raaj Shandilya’s Dream Girl is caught up inside their comic confusion and the buffoonery such fallacious passion inspires, elevated by a relentless supply of zingers.

But it’s also about a guy in touch with his feminist and feminine side, a gift he hides and is made to feel bad about because of how we are conditioned to follow unwritten rules perpetuating gender stereotypes.

Scenes from early childhood suggest his comfort in feminine roles.

Somewhere in the process of speaking in a girl’s voice to save his best friend from trouble and garnering fame for portraying mythological heroines like Sita and Radha on stage in his neighbourhood, Karam has subconsciously developed a womanly alter ego in Pooja, one he fiercely protects and roots for.

We’ve come to expect surprises and wonders from Ayushmann Khurrana.

Once again, the actor doesn’t disappoint and plays him and her like a dream.

There’s both calm and chaos in his astute understanding of an individual embarrassed by the opinions of a hypercritical society and yet, completely at ease with what it may deem queer.

Where his special ‘Pooja’ voice hits all the right comic notes, it’s his talent to moralise in the middle of a Mahabharat mockery that highlights his whimsicality before the audience.

As intriguing Dream Girl’s premise is, Shandaliya treads on it cautiously choosing to focus on the fun. At times, inundating us in it.

Disappointing though this lack of adventure is, it’s nice to note how Dream Girl’s humour never stoops to crassness for the sake of cheap laughs.

There are ample innuendoes (Jisse Taj Mahal samajh rahe ho woh Qutub Minar hai), sure. But it’s rare for a Hindi movie featuring a man disguised as a woman to resist boob jokes or allusions to effeminacy.

Dream Girl’s sanitised sexuality is too busy making a case for the lonely, pathetic callers taken in by Pooja’s wisdom and warmth.

To their credit, they bring the house down. And how.

Sporting an orange-dyed pompadour and Gujjar tattoo (his Gujjar-ness is shrewdly highlighted in how he spells his second tattoo Pujja) on his nape, Raj Bhansali’s pint-sized punk barks and bites with equal glee.

Vijay Raaz and Annu Kapoor have no problem stealing the show.

As the disgruntled cop and irrepressible spouter of bad poetry married to a shrew, Raaz shows off his comic chops like only he can. Whether you are amused by his terrible shaiyari or not, you WILL chuckle hard when he quips, ‘Policewale bhi ghoos dene lage to policewale kahan ke?’

Some of the wit drags too.

Like the one scoffing at Muslim stereotypes, numerous ageist digs directed at Abhishek Banerjee’s Dadi or the needless spotlight on Raaz’s scowling boss.

While on grins, there’s Smiley too, Karam’s childhood buddy.

Too bad Rajesh Sharma is wasted as the devious owner of a dubious hotline service refusing to let go of his golden goose.

Mixing mirth and messaging, Shandaliya doesn’t always get a grip on the number of topics he wants to cover in 132 minutes.

Often, Dream Girl contradicts itself in wanting to be sympathetic about the lonely Indian male syndrome as well as smack them for their deep-rooted chauvinism. Equally confusing is its take on gender discrimination.

While the women employees of the week are limited to a mention on the office board, Karam’s brief experience is rewarded with a car and work-as-you-please entitlement.

Ditto for the microwave-quick romance between him and the open-minded Nusrat Bharucha (charming but precious little to do). Her cakewalk acceptance of a bizarre situation only confirms she’s a mere distraction to underscore the hero’s heteronormativity.

Dream Girl goes in several exciting directions and comes out making light of it.

It may not always be the best way to go about things but you’ll come out laughing till your sides hurt.

And how can that ever be a bad thing? 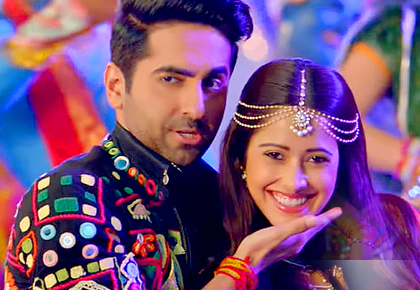