Jaganmohini is a half-baked remake 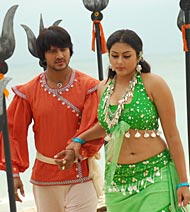 Even when it first appeared in its candy-coloured version, the original Jaganmohini was a riot of short skirts, crazy dances and bizarre, ghost-filled situations that were more likely to leave you laughing than scared.

Murali Cine Arts' Tamil re-make, Jaganmohini in its re-vitalised and graphic-filled form, directed by N K Viswanathan, is no less in its offering, even though there are a few departures from the original.

Pugazhmani's dialogues are, surprisingly, a whiff of fresh air, in what you otherwise expect to be a stale story. The newer version tries its best to add some pep to the proceedings.

Events kick off with a wedding between prince Jagadhalapradhaban (Raja) and his cousin, Azhagu Nachiyar (Nila), of Sangu Theevu when catastrophe strikes in the form of a huge, watery monstrosity taking a womanly shape to destroy it. It's swiftly pocketed into a kamandalam by the wily Sidhar (Kotta Sreenivasa Rao).

The royal families are duly grateful, and ask his help in seeing the wedding through. Needless to say, the bearded man has his own agenda in helping the prince, and in true filmy fashion, talks you through a flashback that involves more princes and fairy-tales: Indrajith (Riyaz Khan), Azaghu's brother and an inveterate killer, not to mention a thief as well and a completely insane Jaganmohana (Vadivelu), with his cohorts, playing a nadaswaram and cracking lewd jokes.

More to the point, you have Jaganmohini (Namitha), a young pearl-diver in the small sea-side town of Muthukkaadu, wearing skimpy two-pieces, who rescues our hero Jagan, when he almost drowns in his efforts to defeat prince Indrajith. She promptly falls in love with him, without knowing who he is. She has, however, sworn to marry only a prince, as her destiny says so. Needless to say, there are plenty of double entendres, duets to Ilayaraja's lackluster music until disaster strikes: the prince returns home and informs his parents that he's had his heart set on a pearl-diver.

The pity of a film like Jaganmohini hits you when you realise that these are the kind of movies that are invariably taken in Hollywood, jazzed up with mind-blowing special effects, infused with snazzy characters and sharp dialogues and they go on to gross billions. This one has potential: star-crossed lovers, angry ghosts, crazy villains, sword-fights, fist-fights and goddesses that smite you down and yet, the story sinks like a stone. The special effects wouldn't fool a two-year-old and you rely on a Namitha, spilling out of her costume, to save the day.

Not that she doesn't try, of course. This film is all about her; the camera traces every movement lovingly, but she really doesn't have much to do except change costumes every ten minutes which have the crowd hooting. Nila tries very hard to appear involved but when she's forced to sing devout songs dressed in a skimpy sari, you can see her heart's not in it.

Riyaz Khan looks more like a prince than a wimpy-looking Raja, a pity because he has so little screen-time. Narasimha Raju, the hero of the original Jaganmohini, makes an appearance here as prince Jagan's father.

Kotta Sreenivasa Rao is more of a comedian than Vadivelu and he pulls out every syllable of every word for so long that the theatre erupts in laughter.

But the real comedy lies with the special effects -- huge spiders, snakes, goddesses who frown and seas that part in such an amateurish fashion that even the kids fidget. The costume designers have had a field day as well, using the same jewellery for all the actresses (a red necklace, in particular), and dazzling fake beads and bracelets that look like props from a stage-set. Namitha, thankfully, has saved them all a good deal of trouble by wearing next-to-nothing.

The locations are the only saving graces in the movie and for that, at least, you're thankful.

With its silly storyline and terrible costumes, Jaganmohini is a half-baked remake of the original, with plenty of skin-show and terrible graphics. 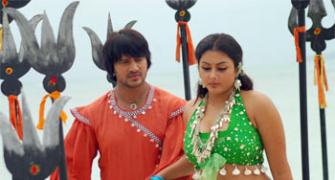