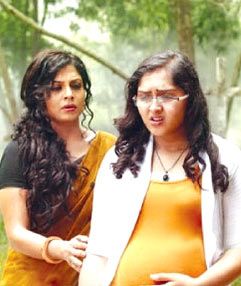 Malayalam film Zachariayude Garbhinikal is complicated in parts and oversimplifies matters in others, but is worth seeing, writes Paresh C Palicha.

Zachariayude Garbhinikal, a film by Aneesh Anwar, tells the story of a gynaecologist and five pregnant women who are under his care.

One of them, a middle aged woman Jasmine Jennifer (Geetha) was a former nun. After leaving the seminary she wants to become a mother. She gets artificially inseminated and is under Dr Zacharia’s (Lal) care. She gets a lot of attention from the media for her decision.

Anuradha (Sandra Thomas) got pregnant in an extramarital affair. Her husband (Joy Matthew) is on his deathbed after a car accident. Anuradha is undecided whether to terminate the pregnancy or to keep the child as it will be something to live for after her husband's death.

Saira (Sanusha) is a pregnant teenager who wants Dr Zacharia’s help to deliver the baby safely and give it for adoption.

Fathima (Rima Kallingal), works as a nurse in Dr Zacharia's hospital and fakes a pregnancy to win the sympathy of her employer who is otherwise very harsh on his employees.

The story of the women is told in a voice-over by Indrajith. We are also informed that the irony is that Dr Zacharia, who is happily married to Susan (Asha Sharreth),

is childless. Predictably, the couple decide to adopt Saira's baby.

Jasmine is the first to deliver--and in a most dramatic way. She drives herself to the hospital even when suffering labour pains when one of her brothers refuses to help her.

Saira is well taken care of by the future parents of her baby. We see her change from a rebellious youngster to a responsible expectant mother.

Zacharia is portrayed as a man with set values. He does not perform abortions or caesarean sections. He lectures Anuradha against having an abortion especially since it turns out she is carrying twins. But, his character does not develop beyond this.

This is one of the most controlled and silent performances of Lal. Sanusha gives an eye-catching performance as Saira, switching moods impressively from jovial to angry to vulnerable like any teenager.

Aju Varghese as Ajmal, a colleague of Fathima, who is besotted by her is a surprise. He plays the role of a conventional hero, yet he leaves his humorous stamp on it.

These are the people who keep this uneven project afloat when it hits rough weather a few times.

Zachariayude Garbhinikal is complicated in parts and oversimplifies matters in others, but is worth seeing. 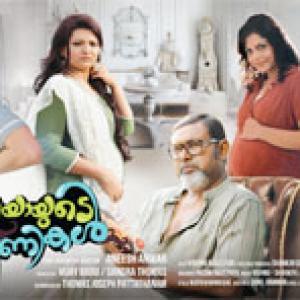