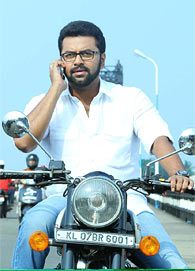 Paresh C Palicha says Paisa Paisa had a proming premise but the director fails to built on it.

Money makes the world go round but the attempt to make it the central motive of this film as debutant director Prashanth Murali has tried to do in Paisa Paisa, is not in the least convincing.

The film stars Indrajith, Aju Varghese, Mohandas and Daniel Balaji. It is a typical ‘new gen’ film with multiple narratives running in parallel and connecting at some point to make a cohesive story.

One narrative is about Kishore (Indrajith), a small time ad filmmaker, who is about to get back with his estranged wife Surya (Mamta Mohandas), who is a model, after a gap of six months.

There is Balu (Aju Varghese), who lands in Chennai for an interview. He calls up his girlfriend Pooja (Apoorva Bose) as soon as he steps outside the railway station. They talk incessantly about everything from what they had for breakfast to their plans for their future together.

Pooja even warns Balu about the auto-rickshaw drivers of Chennai and tells him the exact charge to be paid for the journey from the station to the place of interview.

Surya gives a wake up call to Kishore to remind him that he has to pick her up. We know what has gone wrong between them by the way they conduct themselves on the phone: the bitterness still lingering in the air and the doubt whether their decision to be together again is right or wrong.

All is clear up to this point--characters are etched and relationships outlined. But it all goes topsy-turvy once we reach the crux of the plot when Balu is kidnapped by an auto driver (Daniel Balaji).

The driver is disappointed to find Balu cashless, and demands that he must pay up Rs 10,000 in a few hours or he will hand Balu over to the police as he resembles a dreaded terrorist on the wanted list.

The events of the next one hour are unimaginative and unbelievable. First, Pooja ditches Balu and switches her phone off thinking that he is after her money. Now Balu can only rely on Kishore to transfer the amount into his bank account.

Then, we see Kishore running around Kochi to get the money keeping Surya waiting for him in a coffee shop for hours on end.

It is to the credit of the cast that they manage to carry this flimsy plot with some amount of conviction. It is the artistry of Indrajith and Aju Varghese that keeps us interested in the proceedings. Indrajith interacts with characters from every section of society to arrange for the measly sum of money.

Paisa Paisa has a promising premise to build on, but turns out to be a disappointment.