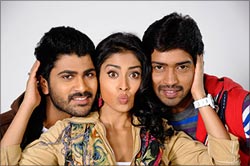 The premise of Telugu film Nuvva Nena is not new but the cast makes it work, writes Radhika Rajamani

Debutant director Narayana scripts and directs this entertainer which is fun from the word go. Two guys going after the same girl is nothing new but Narayana's casting (Allari Naresh, Sharwanand and Shriya) makes Nuvva Nena a good film to watch.

Avinash (Naresh) is a small time thief in Amalapuram who picks wallets and snatches gold chains off women. He arrives in Hyderabad with his friend (played by comedian Ali), armed with all the loot. He sees Dr Nandini  (Shriya), falls for her, and begins to woo her.

Anand (Sharwanand) suffers from a psychological problem and his father brings him to Dr Nandini. He is smitten by her. So, now, both Avinash and Anand want to marry Nandini.

The director weaves a series of amusing episodes around the escapades of Avinash and Anand and their efforts to woo Nandini. In between, Narayana brings in Brahmanandam (as the don Aaku bhai) who too falls for the pretty Nandini. And then there's a nurse played by Kovai Sarala who falls for Aaku bhai.

Narayana just plays to the gallery. There's a twist in the climax, but the fight for love could have done with a dash of zing.
Shriya looks gorgeous, making it quite credible that three men should fall for her! She's seen in a Telugu film after quite a while.

Naresh and Sharwanand are good at their cat and mouse game -- chasing Shriya and trying to pull down each other. Sharwanand, for a change, dances in this film. One gets to see the comical side of him too.

Brahmanandam and Ali add extra punch to the film, though Kovai Sarala overdoes things a bit.

Nuvva Nena is a light-hearted caper and good for some hearty laughs. 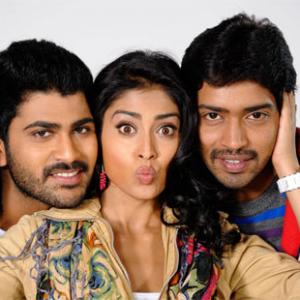 'You will see a new Sharwa in Nuvva Nena'