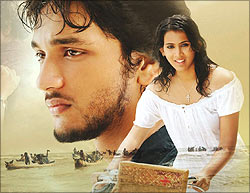 Mani Ratnam takes on the familiar themes of good and evil, sin and redemption, in Kadal, setting the film against the backdrop of a Christian fishing village in South Tamil Nadu. It explores the sea in its myriad hues and against this background weaves a love story between the two new actors Gautham Karthik and Thulasi.

The ace director treads on familiar terrain and what emerges is a slender, cliched story built on a fairly weak premise but shot beautifully.

Sam Fernando (Arvind Swamy) and Bergsman (Arjun) meet at a seminary. On account of Sam exposing Bergsman’s misdeed there, Bergsman is forced to leave the place but nurses thoughts of vengeance.

Meanwhile, Sam -- in the disguise of a priest -- arrives in a fishing village where he gets friendly with Thomas (Gautham Karthik), an orphan, and guides him gently.

Later, Bergsman implicates Sam and sends him to jail and makes Thomas choose the wrong path.

The first half-hour of the film which shows the young Thomas (who is illegitimate) losing his mother, struggling to live and turning out the way he is, quite heart-wrenching. This is the main part which touches emotionally.

Subsequently the film becomes predictable and there is an emotional disconnect too. The premise is a bit too weak to carry forward the story though the love story is interspersed in between.

Essentially, Kadal moves back and forth between being a tender love story and a revenge drama, heavily leaning towards the vendetta angle in the second half. One has seen the trajectory this film takes before, the only difference being the milieu.

So, what comes with the milieu is the different dialect and of course the sea with its various shades. The dialogues are rooted in that area and may be difficult for some to follow.

The environs and activities of the fishing village, few bits and pieces of tradition are covered. A certain amount of authenticity is maintained.

Though the story may not be emotionally intense, the technical competence and acting make up for it. Mani Ratnam’s films have top-notch cinematography with excellent people handling the camera.

Rajiv Menon has shot the sea in all its different moods and colours. Shots of Cyclone Nilam are terrifying to view on the screen.

Mention must be made of the art director Shashidhar Adapa, who chose the locales (including the picturesque Andaman Islands), villages and churches where the movie was filmed.

A R Rahman’s music is another strong point of the film. The songs are chartbusters in any case. Adiye was choreographed well on the stark sands. Other songs Moongil Thottam and Nenjukulle were filmed in pretty settings. The background score also enhanced the film considerably.

Arvind Swamy comes back after about 12 years and he was aptly cast for the role. His eyes are expressive and he gives a good and subtle performance.

Arjun’s was the more power-packed role and these two actors actually stood out, pitted against each other.

Debutant Gautham Karthik, who had quite a substantial role, pulled it off with elan. He had to showcase a variety of emotions - raw, rugged, earthy, tender - and he made a mark. Gautham is a natural performer and is surely here to stay.

The other newcomer, Thulasi, is natural and has lent an air of grace to her role. As a pair, Gautham and Thulasi looked good and did a good job. Lakshmi Manchu has a brief role and is quite convincing in it.

Kadal has all the elements of a regular entertainer but has nothing new in terms of a story. In fact, this story could have been played out against any backdrop and one wonders why the fishing village milieu was chosen.

Somehow, we expected something more from Mani Ratnam.