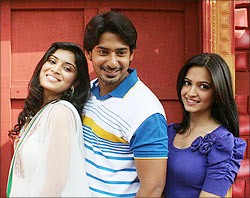 Director M D Sridhar, who has made films for the college going crowd has come up with another one in Galaate. Friends, Chellata and Krishna were in the same mould.

As the title suggests, there is a lot of commotion, sometimes unnecessary, in the plot which is about love letters going astray.

Abhi (Prajwal Devaraj) is a college student who is friends with Ankitha (Kriti Kharbanda). When he falls for her friend Shalini (Hardhika Shetty), an upcoming model, Ankitha, who thinks Abhi and she are in a romantic relationship, is shocked and shattered

Abhi takes the help of Ankitha to deliver a love letter to Shalini. Ankitha writes an anonymous love letter and passes it to Shalini to convey Abhi's love for her.

Abhi's love letter finds its way into a book of his brother, a college professor. The professor's wife reads the letter and naturally enough suspects her husband of infidelity. The college principal (Suman Ranganath) reads the anonymous love letter that gets passed on in a textbook and believes that her professor colleague is in love with her although both of them are happily married.

The letter that Ankitha pens reaches the college principal's husband, who is a cop. He begins to suspect his wife and so the whole confusion and commotion begins between the families. Meanwhile, we have a model co-ordinator (Tilak) who is eyeing Shalini and doesn't like the two lovebirds and so he creates a rift between them. There are the usual fights between the two.

After the debacle of Super Shastri, Prajwal Devaraj has come up with a fairly decent performance. He sports a French beard and stubble with aplomb. The pretty Kriti Kharbanda, who has a charming screen presence, wears colourful costumes and lives her role quite well.

Hardhika Shetty (earlier Nisha Shetty) looks hot and sexy as a model. Suman Ranganath as the college principal has maintained her slim figure and can give the younger heroines a run for their money even at her age.

Shobhraj is quite good as the cop. The role of the villain played by Tilak is superfluous though he acts adequately well.

The music is average and Krishna Kumar's camerawork is good. The film raises a few laughs but lacks zing; it may work as pastime for the college-going crowd.