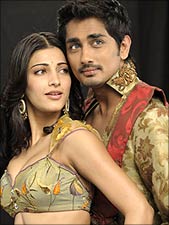 Fantasy as a genre is not often seen in India. As far as Telugu language is concerned, films revolving around socio-fantasies or mythological tales were made from the 1950s and were successful too. Of late one does not find many fantasy films.

So Anaganaga O Dheerudu (AOD) brings back the magic of fantasy films on celluloid. Director Prakash Kovelamudi (son of K. Raghavendra Rao) has scripted a film which harks back to the times of fables.

With Walt Disney stepping in as producer along with well known director K Raghavendra Rao, AOD is mounted on a lavish scale and is splendid to watch. Technically, the film is amazing, be it the photography, the art direction or the editing. The computer generated imagery (CGI), all done within India is fabulous and deserves special mention. It's the story which has a few loopholes which could have been plugged.

The tale is about the kingdom of Angararajyam where the evil queen Irendri assumes charge and spreads fear among the inhabitants. Her oppression is rather hard to bear. Irendri is thirsting for Moksha's blood. The children are rendered lifeless and in order to bring them to life, one of the parents suggests getting the help of Moksha (Harshita), the young girl with healing powers. So her husband Drut sets off to bring her. Moksha is under the care of a swamiji in an ashram. Accompanied by Yodha (Siddharth), the blind warrior and Drut she sets out on the mission.

Yodha in fact tells Moksha that he is in love with Priya (Shruti Haasan), gypsy girl. On the way they encounter lots of problems (all Irendri's doing) which they have to overcome to reach Irendri's palace. Yodha plays a crucial role in warding off the threats. He also has to figure out the link between Irendri and Priya. Will Yodha vanquish Irendri?

AOD is mounted on a mammoth scale. The tale is layered with many twists and turns. Prakash however should have paid more attention to his characters and their characterisation rather than the special efftects.

Art direction by Bhupesh Bhupati also warrants a mention on account of the sets and the selection of locales.

Phani's supervision of the visual effects also should be complimented for achieving a beautiful product in the end. The movie has a period look; a 'mystique' look to it with a modern touch, thanks to contemporary technology.

The sets are well done, the natural locales (be it Vizag, Turkey etc) are well chosen and the CGI heightens and complements the story. The costumes and makeup deserve special mention as well.

There are quite a few songs in the film which like the locales are varied in melody and sound. With an ensemble of four music directors -- M M Keeravani, Koti, Salim-Suleiman and Mickey J Meyer -- it's bound to be so. Salim-Suleiman's background score is good and effective in enhancing some scenes well. So is the case with the stunt masters orchestrating the fights.

Moksha, the central character, could have had more depth to her character. The child artiste is seen mostly prancing around rather than healing people. The narrative goes back and forth without much intensity. The film has too many snakes and this perhaps will intimidate the young children. Also Irendri's makeup (brilliantly done) may also scare them a bit.

Siddharth is good as Yodha the warrior. He shines in his first true-blue action film. He displays quick reflexes, agility, and keenness as the swordsman. From the light-hearted, flamboyant lover to the warrior, Siddharth portrays the transformation well. Siddharth and Shruti Haasan's chemistry is good. Shruti looks beautiful and has a mystical aura about her. She plays a gypsy to the hilt. Lakshmi Manchu as the powerful Irendri is impressive. Harshita as Moksha is soft, sweet and subtle.

Ananganaga O Dheerudu is a costly visual extravaganza. Watch it for the breathtaking CGI tale that cuts across time and space.

A Walt Disney film in Telugu!