Yaaradhu is a neat thriller 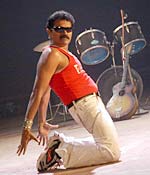 Yaaradhu comes as a surprise package for the Kannada audience who are genuinely interested in seeing something different. Because this is a suspense film with a difference.

And what makes this movie refreshing is the neat presentation and excellent performance by veteran artist Dr M Leelavathi, who is also the producer of the film.

The film has all the usual elements of a suspense film like creepy sounds of doors opening and closing, rustling of dry leaves, eerie silence and terrified expressions of the actors.

But what separates the film from other cliched horror films is the fast paced second half and a nail baiting climax.

Full marks to mother and son duo Dr Leelavathi and Vinod Raj for excelling in their roles. Leelavathi , who has played different roles in over six hundred films, should be lauded for taking on a challenging role, and that too at the age of seventy plus. She has performed exceptionally well, virtually living her role.

Vinod Raj too has managed to shine -- despite his mother overshadowing him in most of the scenes -- in two small fight and dance numbers.

Dialogue writer Srinivasa Kaushik, who has made his debut as a director wins his first battle both as a writer and director.  His screenplay allows the mystery elements to be leaked one by one thereby maintaining the suspense till the very last sequence.

Yaaradhu is technically perfect too, especially the way the graphics have been used in the climax. Music complements the camera work.

Without revealing too much, the story goes like this: Collegians Viji, Ganesh, Anand Raj, Satish and Raju decide to go on a trip to Bheemana Kuppe, a tourist spot near Sirsi in Uttara Kannada district. They stay at a guest house owned by Mary, who also cooks for them. Things start to go awry when three of her guests go missing in three days.

Viji, who also happens to be the nephew of a home minister, tells his father about the mysterious happenings in Bheemana Kuppe. The home minister's well connected brother then uses his political ties to put pressure on the authorities to trace the missing persons. A police inspector, Prathap is assigned the job of investigating the case.

Performance-wise Ashwini's insignificant role does not bring in any relief to the film despite her glam look in a song sequence. It is Suman Jadugar in the role of Viji who has given a creditable performance. All the other artists including the one who play the role of Leelavathi's son have done well in their respective roles.

All in all Yaaradhu is certainly a treat for fans of suspense films.