Review: White House Down is for action film junkies 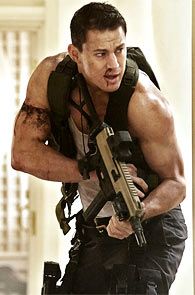 White House Down works because of Channing Tatum and Jamie Foxx's chemistry and its action sequences , writes Paloma Sharma.

Coming from the producers of Independence Day and The Day After Tomorrow, White House Down borrows heavily from cult-status action films such as Die Hard, Air Force One and True Lies.

To win his politically-aware, White House-obsessed daughter over, John applies for a position with the Secret Service.

Though he doesn’t make the cut, he lies to Emily and takes her for a tour of the White House, where Emily meets her hero -- US President James Sawyer (Jamie Foxx). When Emily goes to the ladies’ room, John has no clue that his daughter will be taken hostage by terrorists who are attacking the White House.

The terrorists’ real target is President James Sawyer, whose determination to end America’s longstanding war in the Middle East lands him at the centre of a coup d'état; and the only man who can save the President (and all of America, by extension) from the diabolic invasion is -- drum roll, please -- John Cale!

Although White House Down relies heavily on the compelling chemistry between Tatum and Foxx, it is Joey King, the actress who plays 11-year

old Emily King, who comes off as the most mature member of the cast.

Foxx’s cool-cat-President act is a little hard to believe but enjoyable, nevertheless. However, most of the reel time belongs to Channing Tatum, who goes all-out macho military man on the terrorists who hold his daughter hostage. A character that one would have liked to see more of is Maggie Gyllenhaal’s Special Agent Carol Finnerty, who comes off as a tad one dimensional.

Speaking of one dimensional, the film's soundtrack isn't even remotely close to resemble a background score. It is only music used for the sake of it. Thankfully, you won’t hear much of it over the sounds of gunfire and explosions.

White House Down ends up in the line of fire for peddling liberal propaganda.

But personally, any anti-war, pro-peace propaganda -- liberal or conservative -- should be just fine in any film, of any genre. Aside from a series of explosions (which were severely cool, by the way), the film is held together by the witty banter between Foxx and Tatum because the script, otherwise, is highly predictable. The film includes some pretty high-on-adrenaline stunts and makes good use of every cliché that comes with the genre.

If you’re an action junkie and a fan of the genre, as I sometimes find myself to be, this film might be a good option for you.

However, it is important to remember that White House Down was crafted for Channing Tatum to don a tight vest and punch, kick, cut and open fire at everything that moves; and as long as you’re okay with that, White House Down won’t let you down.