Review: Welcome To New York is a worthless Bollywood spoof

Welcome To New York is not a film with a story or a message. It's a mishmash of IIFA footage, with intermittent spoofs about Bollywood's vanity, feels Prasanna D Zore. 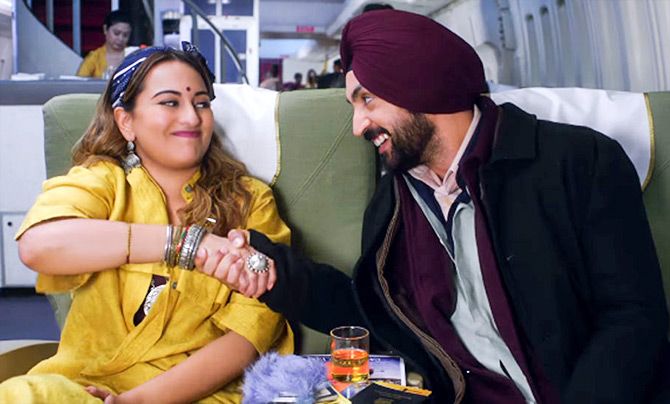 They have done it umpteen times while hosting awards shows and that's why one wonders why director Chakri Toleti spins a film around this theme.

His Welcome To New York is, simply put, a worthless spoof that is not worth your time or money.

The film takes you on a merry-go-round from Amritsar to Baroda to New York, as wannabe actor Teji (Diljit Dosanjh) and fashion designer Jinal Patel (Sonakshi Sinha) get selected to be a part of the International Indian Film Awards.

Their selection, though, is part of a scheme hatched by Sophie (Lara Dutta) so that she can get even with her boss Gary (Boman Irani). Both Lara and Boman are adept at comedy, but they look forlorn as the organisers of IIFA in New York.

Then, there's the love story between Punjab da puttar Teji and Gujarat ni chhokri Jinal. No sparks fly, even though both of them do their best to make themselves likable.

Yet, Welcome To New York is not without its sparks.

The chemistry the two Karan Johars (yes, KJo has a double role!) has a *lot* of spark! His Karan is a version of himself and he spoofs himself mercilessly and brutally. His Arjun is a don out to avenge his fall from stardom after Kuch Kuch Hota Hai hit the marquee.

The tu-tu-main-main between Karan and Arjun is very entertaining.

Karan Johar must be applauded for letting it fly on screen.

His Prada-loving, Gucci-sporting, gay fashionista is worth every penny spent on the film. Perhaps he wants to erase the memories of his disastrous debut in Bombay Velvet and so picked a bold second outing in Welcome To New York.

Well, he has succeeded in resurrecting himself as an actor with his double role in this film.

His chemistry with Riteish Deshmukh looks believable as well.

But the best is Salman Khan's cameo with Sonakshi Sinha, even though the scene barely lasts for two minutes.

Welcome To New York is not a film with a story or a message. It's a mishmash of IIFA footage, with intermittent spoofs about Bollywood's vanity. It's also a platform for actors like Rana Daggubatti, Aditya Roy Kapur and Riteish Deshmukh to remind us that they exist.

The film fails miserably in its intent if the intent were to spoof Bollywood, as it only does that for the sake of punchlines and does not explore it better.