Review: Titanic in 3D is a tad understated 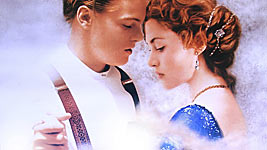 The 3D in the new Titanic is a little too understated, writes Sukanya Verma.

But before that, let me do a Rose and reveal a secret of my own. Now teenage is an erratic time. You could be loud and defiant or shy and appeasing. Mostly, either you're posturing as someone else or figuring yourself out.

Fifteen years ago when James Cameron's Titanic came out, I was one such complicated teenager. Opposing this mega-hyped, multi-million budgeted, sure shot epic seemed like the coolest thing to do.

Few of my college mates and I formed our very own anti-Titanic cult. We refused to succumb to the hoopla or give in to Celine Dion's high-pitched, Oscar-winning declarations in My Heart Will Go On and frowned on its grandly amorous content.  As a consequence of this misjudged rebellion, I missed Titanic on the big screen.

My entire family watched, raved and shook their head in disdain at my lack of participation. Some of the afore-mentioned cult members ratted out too. Newspapers and magazines screamed of its unprecedented success from every possible corner. But I refused to thaw and reconsider my stand. (And I had a *lot* of time considering just how long it ran in our theatres.) This was me at my unwavering best. Then, some months later when the excitement had relatively died down and no one was home, I took out its DVD. This is the part where we get back to my opening remark. Well, I'll be drowned, indeed. What a stupid blunder. Titanic's enormity is designed for big screens.

Even so, after three hours and 15 minutes my erstwhile stance went out of the window and I had fallen for this 20th century epic -- hook, line and sinker. It evoked the same emotions as it did within millions of viewers rushing to the theatres repeatedly making it the number one film at the box-office for 15 uninterrupted weeks. It induced a similar sense of awe as a line from Roger Ebert's review that reads, 'Movies like this are not merely difficult to make at all, but almost impossible to make well.'

Over the years, I have seen Titanic several times and its 'You jump, I jump' philosophy continues to resonate within my romantic being. Perhaps this disclosure was too embarrassing to acknowledge during that so-called cool phase. 15 years later when I was asked to write about its re-released 3D version; I jumped at the opportunity to get aboard RMS Titanic for the very first time on big screen. This time I wasn't a clueless teenager but a woman who had loved, lost and loved again.

There's nothing about Titanic that you already don't know or haven't read. Then again 'how is it?' is not the question on anyone's lips anyway. What matters is how it has aged and looks in three-dimension.

Titanic is unchanged (if you discount the censoring of Kate Winslet's nude scene to garner a U/A certificate) and resplendent as ever. (Although a part of me secretly wished for a miracle that would tweak the end a bit, if you know what I mean?)

Nevertheless, the whiff of Jack (Leonardo DiCaprio) and Rose's (Kate Winslet) surreal romance -- their youthful banter over sketches and spitting, soulful glances and iconic poses against golden sunsets, unstoppable passion in the backseat of a vintage model and an inexplicably magnetic chemistry convinces the beholder she's the one for him and he'll truly save her from one of the most hopeless disasters of history.  All the more because of Cameron's choice of lead actors. DiCaprio's alluring boyishness and Winslet's incredible gift to dazzle the frame with her radiance and refinement lend Jack and Rose an immortal place in Hollywood history.

Titanic works on so many levels juggling a larger-than-life romance between conflicting backgrounds, existent class discrimination, marriage of conveniences,  social prejudices, the outcome of overzealous scientific ambitions, immediate response to calamity, how one chooses to accept their end to more personal interactions that reveal the sensual, spirited side of the otherwise prim Rose, the live-in-the-moment verve of Jack, the despondent Architect and disappointed Captain of the ship, the grace personified  musicians and ultimately Titanic's absolute submission to destruction to the backdrop of James Horner's haunting score.

Even though my memory serves me fine and I am keenly aware of how the screenplay unfolds, the horror of seeing Rose and Jack in a overflowing elevator struggling to unlock the key or when the ship steadily sinks into the North of Atlantic heaving a crowd of scrambling individuals in its cold grip continue to unnerve.

As for the 3D bit, I found it much too understated for my liking especially coming from Cameron post-Avatar. The first two hours barely reflect any and the concluding one hour is unfairly mingy on technology that plays up its re-release. I was hoping to experience the fear and thrill of sinking and getting washed down with this version.

This time too, however, it's the emotionality of its story and the tragedy engulfing its characters that draw non-stop tears and terror during Titanic's climatic 80 minutes. As glad I am to have finally seen it outside the idiot box, wearing a pair of uncomfortable glasses for such a tepid impact (for three hours and 15 minutes) doesn't make sense to me. Want to promote 3D viewing? Release Hugo.

Ultimately, Titanic's triumph lies in its uncompromising grandeur while constructing the fragility and fickleness of life, romance and science supported by comprehensive research, flawless detailing, rich sub-text and ingenious filmmaking. Personally, it reinforces my thoughts about two things -- if you haven't loved, you haven't lived and I have got to learn swimming.