Review: The Man From UNCLE is a superbly stylish romp

The Man From UNCLE is as lovingly tailored as they come, says Raja Sen.

Has there ever been a name as American as Armie Hammer?

It is a cartoonish name with inbuilt stars and stripes, the sort of name that insists on a father named Jack and a son called Sledge, a name that behooves a pro-wrestler, a porn-star or a GI Joe action figure.

As an actor, the blonde, light-eyed Californian is unsurprisingly remembered from solidly American parts, like that of a cowboy or a moneyed Harvard student.

Trust recklessly cheeky director Guy Ritchie, therefore, to take this Golden Age superhero and douse him in an Absolut accent, cherry-picking him for the part of a roughnecked Russian.

Meanwhile, Henry Cavill, a remarkable specimen of British beefcake, is made to play an impossibly suave American, as campily as Roger Moore.

The Man From UNCLE, based on an old American television show, is thus nothing more than a Cold War themed party, a game of ‘Spy Vs Spy’ the director plays with a quartet of astonishingly attractive actors, taking them swaggering across Europe over a silly, forgettable plot. (This is the film The Tourist should have been.)

Forgettability, as those in the know will attest, is not necessarily a bad thing.

As if mesmerised by how spectacular it all is -- the cheekbones, the wardrobes, the continent, the cars -- Ritchie winds down his usual breakneck pace and gives us a spy movie that looks good in cufflinks. And knows it.

It is a pleasant, preposterously frothy bit of summer entertainment with a chilled effervescence that matches the head on a champagne glass. Entirely transient, but ah, such a joy as it flits by. And so damn cool.

The time is 1963, and the American agent Napoleon Solo is being forced to team up with his comrade from across the Iron Curtain, Ilya Kuryakin.

The two need to rescue a German girl, Gaby (daughter of 'Hitler’s favourite rocket scientist') and find her father, who might be arming very wrong hands.

Every actor lays on the affectation thickly.

Debicki, for example, drapes herself like a carefully discarded mink coat on the top of a white couch where Cavill’s Solo is lying down so that the tranquillisers about to kick in don’t injure his (finely-sculpted) head.

This is a throwback, then, to the Bond films of yore, films where James fussed about his shirt-studs and film looked as colourful as it could: one of Ritchie’s characters even waxes gleefully about the joys of Kodachrome, and 'colours so real you can almost taste them.'

There is naturally the sexism appropriate to the cinema of that era, though even that is turned nimbly on its head.

A delicious scene in a Roman boutique, for example, sees Solo and Kuryakin argue about how to dress Gaby as they go undercover, picking out dress and belt and clutch for her, and she’s the one who is efficiently all business while the two hunks dandily bicker on about whether a Rabanne can -- or, indeed, needs to -- match a Patou.

The sight gags are perfect. A meeting between two CIA and KGB operatives takes place in a crowded cafe, but at the end of the meeting, the entire crowd clears out in pointedly un-neutral fashion.

Ritchie naturally has his fun with wordplay, at one point taking the word 'Special' from ‘special agent’ and applying it as one would do today, with, say, the ‘special Olympics.’ But one of the things that makes UNCLE such a lark is how finely, funnily tuned the action sequences are, playing out like Tom and Jerry moments shot and assembled via a sophisticated series of close-ups and reflections and comic-booky split-screens.

Ritchie’s last few films have lacked spirit, especially the hollow Sherlock Holmes outings, but this is a film that feels drunk with affection.

Naturally a film like this is not everyone’s kind of Bollinger, and there is admittedly much smug indulgence on display.

The plot, as warned, is almost entirely superfluous.

But ah, there is such pleasure to be found in the small, integral pieces of the flippantly constructed whole: just try saying Debicki’s name Victoria Vinciguerra out loud, like the first two words of a tongue-twister, and not smiling.

My jaw hurt from the feature-length grin Ritchie elicited, and it’s good to see him, like Hugh Grant in this film, back at ease.

If one must slouch, one best do it hidden by an impressively-cut suit, and The Man From UNCLE is as lovingly tailored as they come. Even if it wears brogues, not Oxfords. 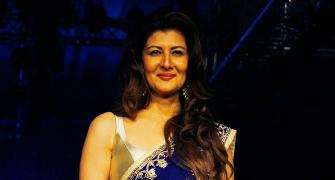 Watch out! Sangeeta Bijlani steals the show at fashion week 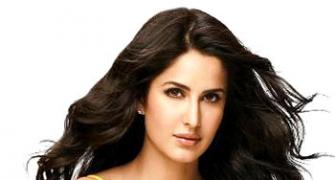 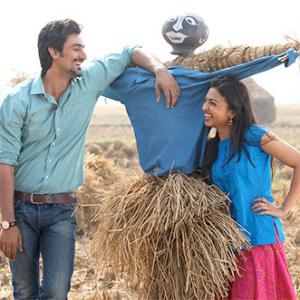