The Last Airbender is boring 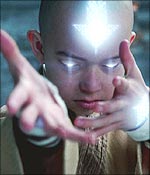 It is a big holiday weekend in the US and Pondicherry-born M Night Shyamalan is back with his own uninspired summer film. His latest work The Last Airbender -- based on a popular animated show on Nickelodeon for young teens -- projects a grand Hollywood vision and lot of financial might, but the film is not much entertaining and gets quite dull after the brief initial burst of energy.

No surprise there since Shyamalan's films have been on a decline since The Sixth Sense scared the wits out of millions of people around the world. If there is one interesting aspect of Shyamalan, it is this: he is the only A-list Hollywood director of Indian origin and his combined films have grossed nearly $840 million in the US alone

I remember sitting watching The Sixth Sense in a theatre in New York City's Greenwich Village. I was engaged, but found the screaming women seated around me in the theatre more terrifying then the images on the screen. After the second viewing, I began to see holes in the film's plot. In fact, all of his films lack basic logic and hence are flawed.

The Sixth Sense was a huge success earning nearly $300 million in the US and another $360 million in the rest of the world. His subsequent films became less interesting -- flat stories and performances, and unimaginative twists. The Mel Gibson starrer Signs (2002) was a hit. But all of the filmmaker's other works have been critical and box office failures. I was fairly intrigued by his last film The Happening (2008) and found parts of it quite scary. But most critics and audience had a very tepid response to that film.

For a number of years now Shyamalan has been trying to break away from the pattern of making suspense thrillers -- although I would argue that most of his films lacked the Hitchcockian narrative structure. For a brief time Shyamalan was attached to Life of Pi. Mercifully that project is now in the hands of a more able filmmaker Ang Lee.

If the press notes of The Last Airbender are to be believed, Shyamalan has long been fascinated by idea of doing a franchise type film. Airbender would fulfill his desire to make his Star Wars like epic fantasy. And with the new film, Shyamalan could find fans in a different demographic group, since his post-The Sixth Sense followers have been abandoning him faster than he would like.

The premise of Airbender (the television show was called Avatar: The Last Airbender) is the sort that would appeal to sci-fi fans and those whose lives are all consumed by epic fantasies, and a narrative cross-section of anime and martial arts.  These are the type of people -- often adults and kids -- who attend fantasy conventions, dressed up in costumes, collect comic books, trading cards and limited edition plastic toys that resemble their favourite characters.

According to the storyline the world was once divided into four tribal nations -- defined by elements Air, Water, Earth and Fire. The Fire Nation -- led by dark skinned evil minded people (including two actors of Indian origin Dev Patel and Asif Mandvi, and Maori performer Cliff Curtis from New Zealand), have been waging wars at the other tribes, and the balance and harmony of the world is in jeopardy. Only one person -- the Avatar has the ability to bend all four elements and bring peace on earth.

The Avatar in the film (played by a 12-year-old Taekwondo trained first-time actor Noah Ringer) is an expert Airbender, but he still has to sharpen his other bending skills. Meanwhile the enemies from the Fire Nation, including the commander's son Prince Zuko (Patel) are hatching plans to capture the young Avatar. 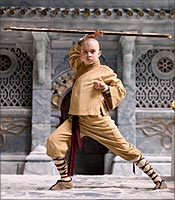 There are grand battle scenes, and Airbender is packed with special effects and CGI generated spectacular images. It is presented in 3D format -- an annoying viewing experience for those who already wear glasses, and have to place another set on top to get the special effect.

Like the recent Clash of the Titans, Airbender was originally shot in 2D, but later converted to the 3D format, clearly because of the huge success of James Cameron's Avatar.  The result of the afterthought, late conversion is hardly impressive. There are few sections where the 3D design works. But most of Airbender would have been the same without the 3D gimmick.

Airbender is Patel's first film after the huge success of Slumdog Millionaire. The young British Indian actor tries hard, but he delivered a far more appealing and winnable performance in Danny Boyle's surprise hit film. Mandvi also has a substantial screen time and speaking lines in the film, but he looks fatigued.

Shyamalan and crew put in a lot of hard work, including shooting the film's early sequences in Greenland. Large sets were created to project the different tribal nations. The film's budget seems to be huge. The same money could have funded at least eight to ten inspired indie productions.

Ultimately it is Shyamalan's writing that defeats the film. The script is uninteresting and how much CGI can one take when the characters and their stories are boring.

Get notified as soon as our Movie Reviews are out!
Aseem Chhabra in New York
Related News: Night Shyamalan, CGI, Asif Mandvi, Dev Patel, US
SHARE THIS STORYCOMMENT
Print this article 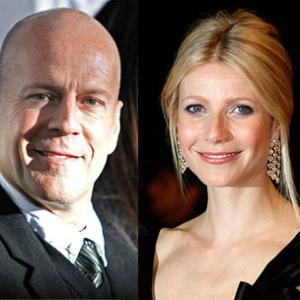 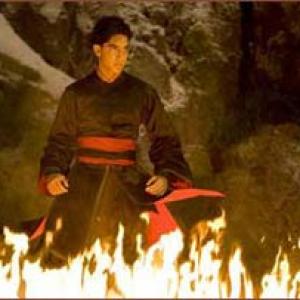