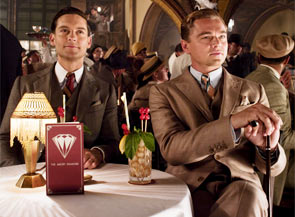 The Great Gatsby is a good looking film but is less heartfelt, writes Raja Sen.

A famous Hindi film actor (who shall naturally go nameless here) once told me, while gushing about Baz Luhrmann’s work and cinematic flair, that he “is like Sanjay Leela Bhansali, gone right.”

I laughed it off at the time, but there are few more astutely drawn parallels than between these gentlemen who insist on creating opera but staging it a la cabaret.

Alas, it is with this new adaptation of The Great Gatsby -- in which Luhrmann indeed borrows an actor Bhansali has used before -- that the Australian director is tragically at his least heartfelt as he looks to smother F Scott Fitzgerald’s literary masterwork with tinsel butterflies. In 3D, no less.

Which isn’t to say it doesn’t look good. It is a massive piece of confectionary with Disney castles and gleaming yellow automobiles and flapper dresses and pink suits and champagne magnums filled with confetti, and Luhrmann shows off his world with brashly hallucinatory glee.

A visual where the most beautiful shirts in the world are flung towards us like exotic birds is particularly gorgeous, for example. And this Gatsby is set in the 1920s but -- despite the occasional and unintentionally hilarious swell of Gershwin (watch for the moment we first see the ‘hero’) -- booms along with a cleverly used but highly modern, Jay Z-filled soundtrack; even the Charleston challenges the subwoofer.

That might well have been the Jazz Age but this is unmistakably the Baz Age.

And yet it all comes across as a pale Moulin Rouge imitation, as if that eye-poppingly original director was being reined in, perhaps by the very source material many have called unfilmable. The result is trite, a mess of restless marionettes -- characters made wooden and visibly dying to burst into song but never allowed to -- peopled by very fine actors forced to ham it up.

Tobey Maguire’s Nick Carraway, for instance, talks of his cousin Daisy with the same saccharine awe he used as a 17-year-old in love with redheaded Mary Jane Watson. Which wouldn’t have been as problematic were he not this film’s narrator.

Ah, but far stranger things are afoot than merely contrived attempts at sincerity. In this film Carraway plays not just Gatsby’s friend but, inexplicably some sort of loony stand-in for Fitzgerald himself: Luhrmann’s whole film is a flashback from a sanatorium told in Maguire’s voice but heavy-handedly using Fitzgerald’s prose as if the character had come up with it.

What this B-movie framing device adds to the narrative itself is unclear, save for giving the director opportunities to write words like ‘grotesque’

in cursive text and take us all for beautiful little fools.

Then again, at least Maguire’s eyes are adequately soaked in pity. Carey Mulligan drowns her Daisy in such a state of melodramatic disrepair that the character never leaves an impact. Elizabeth Debicki’s Jordan Baker fares better and looks the part perfectly, shimmying even as she stands up straight.

Leonardo DiCaprio’s Gatsby is -- like most screen versions of the character -- far too charismatic to be that hospitable bootlegger on the fringes and looking in, but DiCaprio manages to bring some vulnerability and authenticity to his Gatsby, even if sometimes resembling his own Aviator role a bit much.

But Leo’s better moments (like one where he waits impatiently for Daisy, his white suit soaked but his enthusiasm undamped) serve only to throw the script’s inadequacies into sharp relief.

“Let’s get the wolf-pack back together,” says Tom Buchanan as the film opens, jarring us immediately by using that word now linked so tightly to the Hangover movies. Buchanan is played by the excellent Joel Edgerton, who the film takes pains to ensure we loathe right from the get go.

These pitiful broadstrokes are seen everywhere: in Isla Fisher’s caricatured version of Myrtle; in the satanically manicured beard on Amitabh Bachchan’s Meyer Wolfsheim… Bachchan’s bit is quite good though, to be fair, and a couple more scenes with him might have helped. (At the very least they could have prevented Luhrmann from going on and on, spelling things out about bootlegging and drugstores.)

The genuinely exasperating thing is, however, that this film indeed tries doggedly hard to capture the spirit of the book. Not just the vulgar excesses of Gatsby’s frequently flaunted wealth but also its sadness, its yearning.

And while the visual circusry propels the first half of the movie to at least the level of an impressively exploding firework, the flourishes mostly dry up in the second half as Luhrmann tries to tell the story of a man and a woman with ill-judged restraint.

The romance, told the way it is, comes across more infantile than fabulous.

There is style here, then, but not enough of it. Merely keeping things spectacular all the way might have sufficed. As it stands, I recommend smuggling a flask of gin into theatres in order to swallow the second hour easier. Fitzgerald (and Jay Gatsby) would have approved.

What he might not have approved of, though, is the way Luhrmann appropriates and trivialises those exquisite, immortal last lines from the novel. Just so his film can look at itself in the mirror and preen some more.