Review: The Amazing Spider-Man 2 is a pain in the web 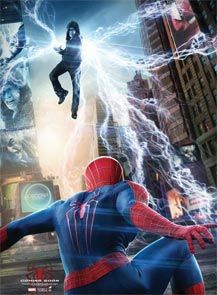 The new Spider-Man film gets everything wrong except the girl, feels Raja Sen.

Marvel Comics is known as The House Of Ideas. Many a memorable character lives at Marvel, and scores of writers and artists -- of unquestioned eagerness but varying degrees of talent -- are given cracks at bat with the company’s caped mascots, taking their stories further and carving new thrills while not ruffling the status quo too much. Naturally, this results in a wonderful unpredictability, with sub-par superheroes often lucking out and finding truly ingenious writers, and massively iconic heroes skulking around in poorly written and drawn panels. (For example, while there isn’t a single solid current comic featuring fan-favourite Wolverine, the adventures of the least interesting Avenger Hawkeye are top drawer right now.)

And thus, for over 50 years of issues, we true Spider-Man believers have ridden the roulette wheel, knowing that for every fine writer and great story arc we’re also going to get some hacks who throw up clones and Faustian deals and the occasional illegitimate lovechild. We’re used to it, and like Peter Parker, that greatest of comic-book heroes, we take the rough with the smooth. And right this minute, while the Spidey comics are enjoying a significantly smashing streak, it is clear the Spider-Man movies have fallen into the wrong hands

The Amazing Spider-Man 2 is a drag. It pains me to say this, but Marc Webb’s film is a total downer, a film lacking in smarts, ambition or spirit. I began my career as a film critic ten years ago with-- Sam Raimi’s excellent film that remains the gold standard for the superhero genre -- and it hurts to cap a decade with a complaint about a sub-par reboot instead of a celebration of the spider.
This is an unforgivably boring film, and while it may not seem as instantly objectionable as Sam Raimi’s monstrous Spider-Man 3, it must be marked that at least the older film failed because of ambition, because of trying to do too much. Webb’s new film, on the other hand, is inexplicably slow and torpid, a haphazard and amateurish affair where the seams show all too glaringly. Save for a couple of relatively funny lines -- and the devastating climax -- there is nothing worth remembering in this painfully generic film.

I didn’t expect to be saying this, but a big part of the problem is Andrew Garfield. He’s a bright, gifted actor who certainly possesses a distinctive edgy charm, but for some reason he continues to play Peter Parker as elusive and sullen. There’s an angsty cockiness to him better suited to a tween vampire film, and while Garfield is disarmingly natural, he falls a far way from actually being likeable. It’s hard to relate to -- not to mention root for -- a Peter Parker so brusque, so easily irked by those he loves, and harder still not to yearn for his predecessor Tobey Maguire, who made Peter’s all-important earnestness come alive. Spidey’s a quip-flinging whippersnapper, sure, but that’s because Peter’s a good kid who pulls on an overcompensatory flamboyant persona along with that mask. In the (much better) first Garfield film, a lot could be chalked to the character’s confusion, but here Peter seems like a jerk all his own.

Things are worsened by the filmmaker’s constant indecision. Aided by a bombastic soundtrack -- 80s TV cop-show style blare for the opening chase with Rhino, synth-heavy chanting for Electro later on — the film looks to be put together by a committee, eager to throw in something for every focus group. This means lots of heavy-handed flashbacks, constantly unclear motivations for the characters, action sequences that refuse to do anything cool, ghosts from the old films (literal spectres appearing now to confuse Parker, as well as feeble echoes of action setpieces from Raimi’s Spider-films) and an awful lot of melodramatic hokum.

Much time is spent, for example, on the villain’s origins, but they are handled so unimaginatively that we’d be (much) better off with a voiceover saying “Oh, that guy’s Electro. He can control electricity.” What we’re given are backstories from the mid-90s, say Batman Forever style… and if we’re invoking Joel Schumacher to describe a Spider-Man film — at a time when even Captain America can have a seriously good movie — then it’s clear that both power and responsibility have begun to grate.

What does work is the girl. Emma Stone is sensational as Gwen Stacy, seemingly as baffled as we are re: the ill-humoured Mr Parker. She’s smart, snappy, knocks every line straight out of the park, and conjures up quite the chemistry, enough even to make up for her too-slack hero. In a deft touch, she invariably seems to sense Peter’s presence nearby -- her own SpiderSense, if you will -- and we can’t blame Parker for asking her to keep that irresistible laugh “off the table.”

Readers of the comic are well aware that this film features a crucial scene with Gwen, and while Stone makes it pop, Webb and gang stretch it out way too much, and then proceeding to chicken out and completely reduce the stakes. Sheesh. (Not to spoil anything here, but if you’d really like to get a feel of Gwen and Peter, I suggest hunting up Jeph Loeb and Tim Sale’s lovely “Spider-Man: Blue” and imagining what Stone could have done with that as a script.) Aargh. The scene itself might be half-decent in isolation, and its chilling to see Stone mirror precisely what Stacy wore in the books, but a film this mediocre simply doesn’t earn such a landmark moment from the Spidey mythos. (It seems to know it, too, which is why it tries to move past it very clumsily.)

This is malarkey, malarkey that bores for eighty minutes before coming to life somewhat during the last hour. There’s some very conveniently resolved nuttiness regarding Parker’s parents, Dane DeHaan -- a dead ringer for a slimy Gilbert Grape — showboats hammily as Harry Osborn, and there are more than a few unsubtle teases regarding upcoming villains. (Meeting a woman called Felicia or seeing schematics of The Vulture’s wings leading up to the next installment would normally be a mouthwatering prospect, but right now they seem threats filled with more exhausting backstory.)
One kid holds out hope, though.

One adorable little runt with thin-framed glasses and a science project looks at Spider-Man as his hero and doesn’t care what people say about him; he knows he’ll be back and he knows he’ll be better than ever. And therein lies the lesson for us as summer cinegoers: it’s okay to prefer Tony Stark or Black Widow right now — till Spidey falls into the right hands, that is. For now we can go home, turn up the real Spider-Man 2 and watch Peter Parker try to deliver pizza.